A Curd in Hand: A Cheesemaking Trip to Major Farm

I wrote this over a year ago, on May 15, 2007. JR joined me on a trip to Major Farm in Putney, Vermont, taken by my cheese class at Boston University, rather than play golf in a tournament he’s played in for years, which garnered him much ribbing from his golfing buddies. You know, I like golf, too, but not nearly as much as I like cheese. I suppose that should be evident as I just mentioned that I took a cheese class. I thought that this would be handy background information on Major Farm as it is one of the stops on our farm and food tour this past weekend. 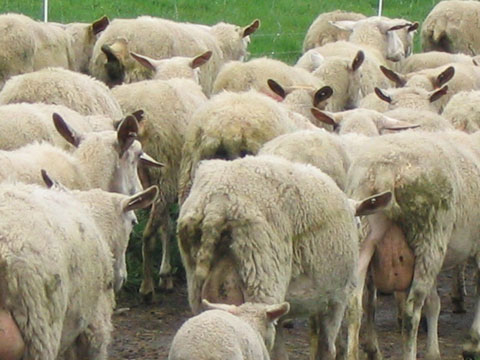 JR and I were up at 3:22am on Friday morning to make the drive to Vermont for my cheese studies class field trip. We arrived at Major Farm, producers of Vermont Shepherd cheese, in Putney at 8:30am, in time to hang out in the upstairs of the barn, which serves as a dorm for summer help, for a few minutes before heading down into the barn to see, in action, the milking system that farmer David Major developed to make milking sheep less stressful for all parties involved. 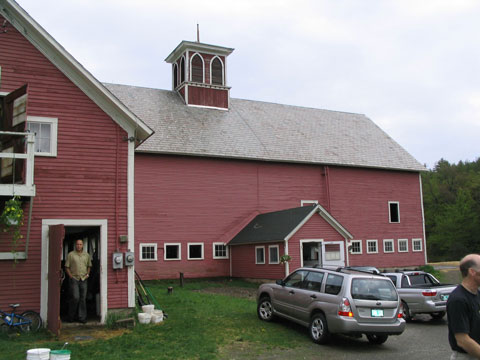 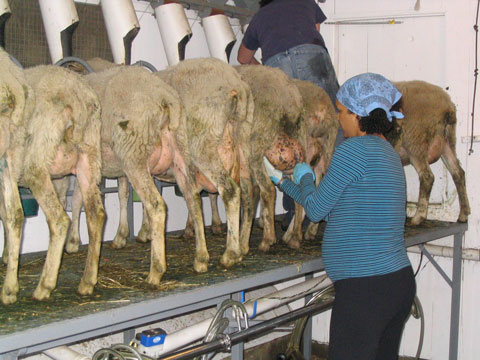 As you can see, the sheep are on an elevated platform, which is easier on the humans as well as the animals. The milker doesn’t have to get down on the ground (or thereabouts) to milk, saving them a little physical exertion, and the design helps the quality of the milk as the sheep aren’t stressed while milking, partially because there is feed at the front of the apparatus to keep the sheep busy while being milked. The milk flows through tubes into one stainless milk can, which is a more efficient and sanitary system than milking into small stainless containers. After milking, the sheep are set out to pasture on the 250 acres that is owned by the Major family, including David’s parents and brother. Every aspect of the cheesemaking process is contained on their property; grazing is managed so that the sheep are moved from pasture to pasture so as not to overgraze, the milking is done twice daily; once in the morning and again in the evening by the Majors, and the cheesemaking itself takes place about 50 yards from the barn in the cheesemaking parlor. The batch of cheese we “helped” (or observed, more accurately) David make was the product of four separate milkings; Wednesday evening, Thursday morning and evening, and Friday morning. In total, there were 13 stainless steel milk cans full for this batch of cheese, totaling 1050 gallons of milk, which turned out 21 eight-pound wheels. A local cheese expert, Peter Dixon (www.dairyfoodconsulting.com) came by to visit as we, okay, David, made the cheese. Peter explained that the milk shouldn’t be held more than 40 hours for cheesemaking, otherwise, the beneficial bacteria begin to die off, and you’ll wind up with a cheese with “off” flavors. We moved the milk cans from the barn with the help of a hand cart and a little pick-up truck, and the cans of cold milk (from the previous days’ milkings) were poured into a stainless vat which was steam-heated. While the cold milk was brought up to 90 degrees (being stirred constantly so that it warmed more uniformly), the warm milk from that morning’s milking had starter culture added to it to begin the process of breaking down lactose (sugar) to lactic acid which aids in creating the curds. Curds are the coagulated milk solids which form the cheese. The warm milk leaves the sheep’s body at 102 degrees, which is the body temperature of a sheep. By the time the milk is moved from the barn to the cheesemaking parlor, its temperature has dropped, and when the temperature is between 75 and 83 degrees, the starter culture is added. 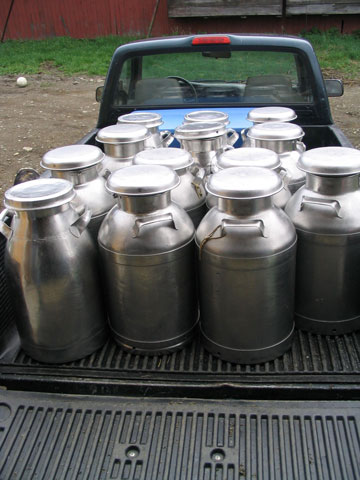 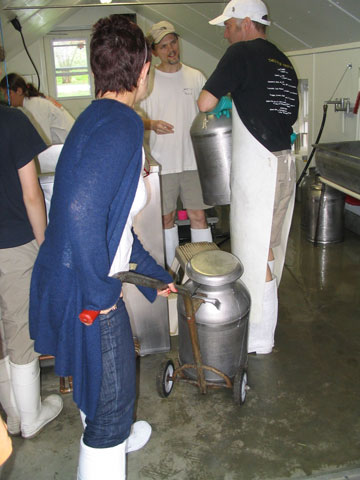 you take one down, and wheel it around… 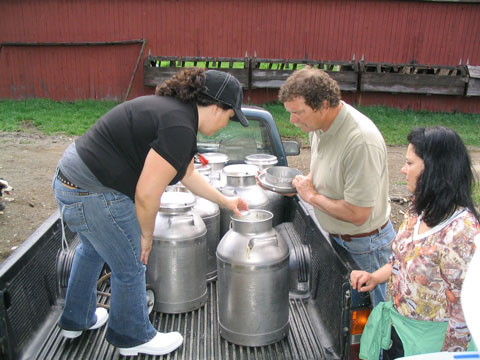 Enough with the beer on the wall song. These people are taking the temperature of that morning’s milk. Once the milk that was refrigerated has been brought up to 90 degrees, the warm milk with the starter culture is added, and then all of the milk is warmed to around 100 degrees. The milk is constantly stirred in the vat while it comes up to temperature, and when the pH is where the cheesemaker wants it (I need more information on this part of the process, it seems!), he moves on to the second step in creating curds: adding the rennet. Rennet is an enzyme which causes the milk proteins, or caseins, to break down, which works alongside the starter culture to create the curds. There are a few types of rennet: cow rennet, kid (goat) rennet, lamb rennet, vegetable rennet, and thistle (or cardoon) rennet. Rennet is found in the stomach linings of young, milk fed animals. Human babies also have rennet in their stomachs to help slow down the digestion of milk proteins so that every bit of protein is extracted as the milk is digested. While rennets can be created by the farmer by drying calf (or lamb, or kid) stomach linings and creating a powder from the dried stomach lining, many farmers choose to purchase rennet, and, in the case of Major Farm, they use a liquid rennet that is commercially produced. Rennet is a subject which deserves its own rambling blog, which may happen in the future, but now, we’re going to get into the good stuff: separation of curd and whey (you can barely contain your excitement, no?). Once the milk solids become a custard-like block, the curds can be cut. The size and moisture content of the curds determines the end consistency of the cheese. As Peter Dixon told us, it’s counter-intuitive, but the more moist the curd, the harder the cheese. This is because more moisture seeps out during the pressing of the cheese, compacting the curd, which is where the size of the curd comes into play in final texture. Vermont Shepherd’s curd is cut to about the size of a pea, resulting in a semi-hard cheese, with a consistency near that of a young cheddar. Parmigiano-Reggiano curds are cut to the size of rice, which creates the firm, dry texture, and a cheese like mozzerella has large curds, resulting in a soft, high moisture cheese. 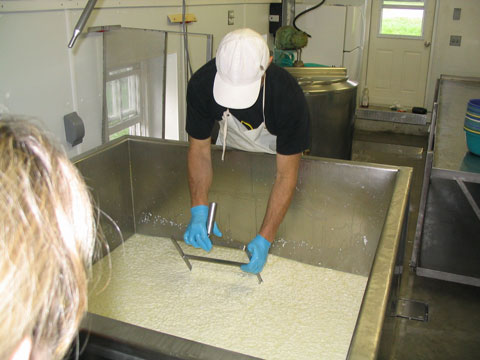 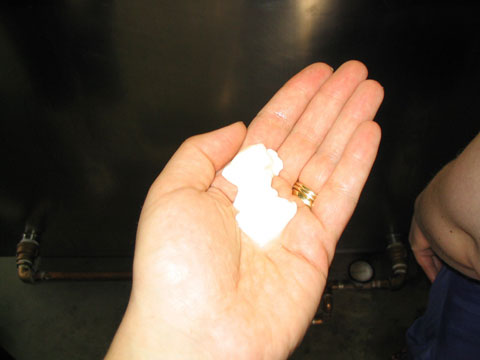 yes. A curd in hand, people.

The curds are separated from the whey, and are then placed in cheese molds, which are placed under pressure to drain additional whey from the curds, and are aged for four months before being released to the public. The Majors have built their own cheese cave, which is located up the road from the barn. It is built into a hillside, and is also where they take care of the shipping for the farm. Mail order is available, but bear in mind that the cheese is a seasonal product as they only make the cheese during grazing season. Overall, the trip to Major Farm was inspiring and informative. The Majors work incredibly hard at their craft, treat the land and the animals with care, and it shows in their scrumptious cheese.

One Comment to A Curd in Hand: A Cheesemaking Trip to Major Farm