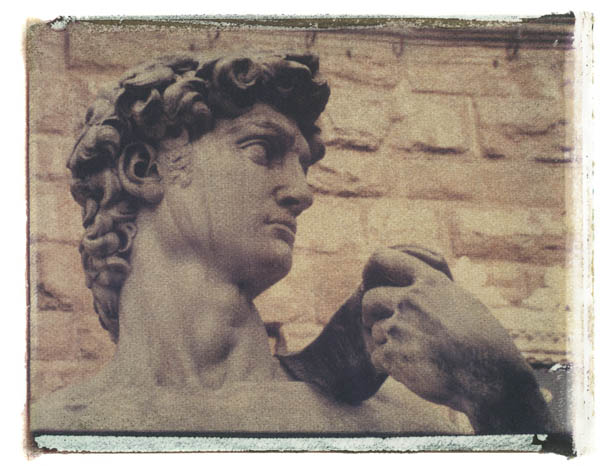 someone please get this man a glass of wine.

Back when we had just a wee bit more money, JR and I traveled to Italy. Our first trip was in the spring of 2001. It was JR’s birthday, and originally I had wanted to take him to Key West for a long weekend, figuring it would be warm, festive, and I hadn’t been there since spring break my junior year of college. I searched and searched and searched for reasonable airfare and lodging, and the best I could do was $1500. For airfare alone. For the weekend. Not for nothing, but even my college memories of Key West weren’t compelling enough to have me spend $1500 just to arrive there. Then, on a lark, I decided to check fares to Florence, Italy. Round trip was around $500 per person, the dollar was strong, and, hey, I’d always wanted to go to Italy. And, yes, I know this was JR’s birthday, but come on – $1000 for two people to fly to Italy? Why wouldn’t he be agreeable, even if it was my always-want?

We arrived in Florence – which I recall asking my friend Celia prior to leaving, “Is Florence Firenze?” (yes, it is.) – after a long bus ride from Milan/Milano because our connecting flight had fallen victim to a random Italian labor strike that only impacted flights from Milan to Florence provided said flights were scheduled to depart between 8am and 10am. This is how labor strikes seem to work there, as far as I can tell.

We were grubby, hot, and more than a bit concerned that we wouldn’t love Italy having just spent 6 hours on a bus riding through heavily industrial areas. Where was the beautiful countryside I had been dreaming of? Where was the stunning architecture? It wasn’t at Aeroporto di Firenze where the bus deposited us, and it wasn’t in the outlying areas of Florence that our cab passed through on the way to our hotel. But the beauty was very much present at the foot of the Ponte Vecchio where our cab let us out as I sputtered, and I do mean sputtered, as I’m pretty certain it came out as though each syllable were its own word, “tenga il resto,” instructing him to keep the change as JR and I emerged into the humid air of April in Florence.

We deposited our bags at the hotel and promptly walked toward the Duomo, which is what is required of all tourists upon arrival in Florence. And once you get there, you will see that it truly is a requirement, there is simply no other way to explain how so many humans converge on a space that doesn’t contain, say, a Twilight star on a promotional tour, or The Jonas Brothers and their requisite throng of squealing tweens. Surely, culture couldn’t draw this big a crowd on its own? Ahhh, but it does.

Upon seeing the clusters of tourists milling about outside the Duomo, you realize that you will have to come back early the following morning if you’d like to actually see the inside of the church. You will return in the morning, but only after your husband pulls the “alarme” cord in the shower which results in a hotel staff member knocking at your door screaming “are you alright in there?” in Italian, to which you respond, once you somehow decipher the Italian, “Si. Si. Tutto bene. Grazie.” Yes, yes, all good, thank you. This commotion will then cause your husband to ask, “what was that?” “Oh, just some staff member asking if every thing’s alright in here.” Then there will be silence from the bathroom. “What,” you will ask. “Oh, nothing.” “You didn’t pull the cord in there, did you?” More silence, and then, “I thought it was to start the fan.” Note to Americans Traveling to Italy: if there is an exhaust fan, it is not connected to the cord in the shower that says “alarme” over it. The alarm that alerts the staff that you are in the shower and injured is connected to the cord that says “alarme” over it.

As it isn’t the next morning yet, you have yet to enjoy your own personal alarme incident, and you still want to see some of Florence before you pass out from jet and bus lag, you stroll over to the Piazza della Signoria near the Palazzo Vecchio and the entrance to the Uffizi Gallery. This is where the fake David spends his days on a pedestal. The real David of chiseled-by-Michelangelo-himself fame is in the Galleria Accademmia, and you need to purchase tickets in advance to see him, in the event that you’re planning a visit. Just north of the piazza was a little side street that contained a fantastic wine bar. The wine bar was connected to an equally fantastic shop called Magazzino Toscano that sold beautiful ceramic plates, bowls, water jugs and decanters in stunning jewel tones, antique table linens, hand-crafted copper pans, and hand-forged knives with stunning carved bone handles. People could sit and eat dinner at enormously long wooden tables in the shop. JR and I were feeling quite road fatigued, and, though it was too early in the afternoon for an Italian person to consider sitting at the bar – 4pm – we felt we deserved it after that arduous bus tour through the industrial north of Italy. The barman was very friendly, and spoke excellent English (another Note to Americans Traveling to Italy: do not believe any person who tells you “they all speak English.” Think about it. They’re Italian. They live in Italy. They speak Italian with the other Italians. Unless they have a real need to speak English, which they all don’t, they won’t be proficient in it. Just as you aren’t likely to be proficient in Spanish if English is your first language and all the people you come in contact with speak English.). We opted for a flight of Tuscan wines, which had us both sampling 4 different wines. As is the way in Italy, the barman provided us with snacks, in this case, olives and chunks of pecorino cheese, in little ceramic jewel-toned ramekin-type bowls. He then brought us Tuscan bread, which is unsalted, and instructed us to sprinkle salt from one small jewel-toned bowl over it, and then to drizzle olive oil over the salted bread. We savored our wines as we relaxed at the bar – all dark wood and walls lined with wine bottles, which, we would learn, is typical of Italian wine bars – and I fell in love with the little ceramic bowls, six of which I now own, and one wine, which stood out from the other three. I was already in love with JR and we hadn’t seen quite enough of Florence for me to have fallen in love with it in a wine bar, so please don’t be disappointed if you were looking for more romance out of the previous sentence. I do love Florence now, as well, in the event you’re wondering. I asked the barman – his name was Davide – the name of the wine that had captured my affections. Sassotondo, he said. It was a Super-Tuscan wine. Super-Tuscan wines are generally sold as red table wine because they don’t adhere to the regulations of the Italian government’s quality-control labels, Denominazione di Origine Controllata (DOC) and Denominazione di Origine Controllata e Garantita (DOCG), which control the types of grapes and the ratios at which those grapes may be used in blends in the production of Italian wines. Super-Tuscans tend to use grapes that are known as “international” varieties, such as Merlot, Cabernet Sauvignon, and Syrah/Shiraz in their blends, where most DOC or DOCG wines use indigenous Italian grapes, such as Sangiovese in Tuscany, or Nebbiolo in Piedmont, or Nero d’Avola in Sicily. The list of indigenous Italian grapes is rather long, and, while I do hope to try them all and write about them here, I’m not going to do so today.

I thought for certain that I’d be able to find Sassotondo when I returned home, but that turned out not to be the case. I even gave money for a bottle to some friends who were traveling to Italy, but they never found it either. Clearly I had forgotten about that amazing new search technology, The Google, or my quest would have been come to its conclusion sooner. I had given up hope of ever finding it here in the States, but then, this past Sunday, I was covering a wine event at Tomasso Trattoria in Southboro, Massachusetts for a wine newsletter, and, as I scanned through the list – nearly 100 wines! – I saw it. 2005 Sassotondo Ciliegiolo Maremma Toscana IGT. Maremma is the region within Tuscany. Consider it like a county within a state here in the U.S.. It is coastal, and was long barren of vines as it was infested with malaria-carrying mosquitoes, but no more. I don’t know what they did to the mosquitoes and the malaria, but it is now one of the most sought-after areas for wine production in Italy, much because of the reputation of the Super-Tuscan wines produced there. The international grapes thrive in the climate of Maremma, and many famous and very expensive Super-Tuscan wines are produced there, including the highly-rated 2001 Masseto, which is a Merlot and which I found on sale for $749 per 750ml bottle online, though it appears to retail for anywhere from $900 to $1100 per bottle. Ok? Sassotondo is a splurge by my Poor Girl standards ($15 and under, preferably under by $5 or more), but at $22.00 per bottle, it’s nowhere near the ooops-I-guess-I’ll-have-to-miss-my-mortgage-payment-this-month price tag of a wine like Masseto. The Sassotondo contains 90% Ciliegiolo, a grape believed to be native to Italy and the parent of the primary wine grape of Tuscany, Sangiovese. The remaining ten-percent is juice from the Alicante grape, which is a grape developed in France and prized for its deep ruby color, and this wine is a deep ruby red. Even with the rich color, it is a light wine, fruity and low in tannins, and a perfect wine to enjoy with food, or, as the taster next to me on Sunday concurred – without food. That’s up to you. No one’s there to judge you, you know. The distributors, Steve and Rachel, seemed almost as happy for me as, well, me, that I had finally been reunited with this wine. Fortunately, I now know just where to go when I’m hankering for a bottle of Sassotondo – Tomasso Trattoria has a wine and food shop next door called Panzano where I can fetch me a bottle any time. Hey, come to think of it, that’s almost the same set up as the wine bar and Magazzino Toscano in Florence, isn’t it? Ahhhh, buona fortuna per Io! E per tu!

Dinner tonight: Bolognese lasagna. I cannot wait – it’s going to be perfect for this rainy, dreary day and, I think will go well with the Sassotondo! Estimated cost for two: $3.77. For real. The sauce cost $8.29 as made in the Untraditional Bolognese post, we had 2 servings of it over pasta last Friday, so 6 servings are going into the lasagna, and that’s $6.22. The lasagna noodles are one-half of a box that cost $1.59, so that’s 80-cents. The Bechamel sauce consists of 4 cups of milk which was $1.39, the butter was 43-cents, the flour was 6-cents at $3.99 for 76 quarter-cups per 5 pound bag, and we used the less-expensive, already grated, but still real – no green jars of faux cheese for us – parmigiano-reggiano from Venda Ravioli, 3 ounces of that cost us $2.43. The total cost for the lasagna is $11.33, and that works out to $1.88 per serving.