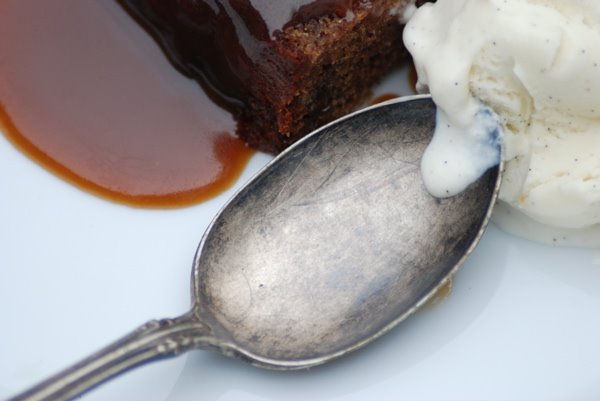 For our Christmas celebration this year, my sister came up with the idea that we should have a bake-off. The only criteria of the bake-off being that each person bring a dessert they had never before made. Now, my normal holiday dessert is Tiramisu, which I love, and which normally gets pretty good reviews, mostly nonverbal, like the double batch that was completely wiped out in twenty minutes at Easter, but given the rules, Tiramisu was out of contention. I had already planned to make a pull-apart cinnamon bread, but that was more of a breakfast pastry/roll option to go with the brunch my mother was putting on. I had eaten the most fabulous sticky toffee pudding at one of my favorite restaurants, Trattoria della Nonna in Mansfield, Massachusetts (if ever you’re going to a concert at the Comcast Center, you should stop at Trattoria della Nonna for dinner first), so I did a little research, and found this recipe, which also makes good use of coffee or espresso like the Tiramisu. And I’m all for using coffee and espresso in desserts as there is often leftover from each morning’s brewing.

Which leads me to the substitution I made. The recipe called for instant coffee granules, which I don’t keep on hand, for I do not drink Nescafe or the like, so I made myself a pot of espresso on Christmas morning and used one cup for the pudding. Regular coffee would work just as well, and the only ingredient you might have to go out of your way to have in your larder are dates. Or possibly cream for the caramel sauce if you don’t keep cream hanging about. The pudding is easily put together, and, as previously mentioned, I made it on Christmas morning without adding stress to the day. In fact, for a limited amount of effort, this produces an incredibly delicious dessert that pairs beautifully with vanilla ice cream. And that makes the I’ve-personally-never-made-it-before-December-25-2008 sticky toffee pudding a go-to dessert in my book.

Adapted from Bon Appetit via Epicurious (and they, in turn, requested the recipe from the Beginish Restaurant in Dingle, Ireland)
For the cake:
For the Caramel Sauce: