Nothing says Happy Holidays quite like a Pan di Toni 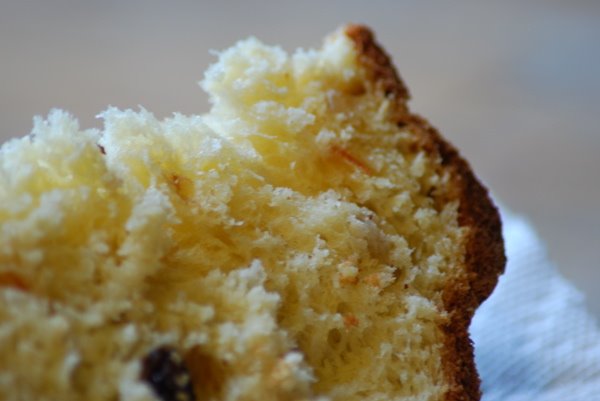 This holiday season, I’m giving a little more baking cheer than material cheer, though I suppose that the baking cheer could result in an extra pound or two on the midsection of those receiving apple cake, assorted cookies, and – a new addition to my baking repertoire, one which also happens to fulfill my yeast-bread-a-week requirement – panettone. And if you gain a pound or two, is that not material? Possibly not material cheer, but certainly material.

In order to help spread the weight – I mean cheer – around this holiday season, I had decided to embark upon the quest for perfect homemade panettone. However, I started on this mission prior to reading anything regarding the pitfalls of such a quest. The Gastronomy of Italy by Anna Del Conte, a very handy reference for all things, well, gastronomic as pertains to Italy, actually says something along the lines of “panettone is rarely made at home due to the difficulty, particularly with regard to the rising time.” Sometimes it’s best to be ignorant of obstacles and just jump right in.

I had already made one panettone before learning that panettone is too difficult and time-consuming to make at home. No one wants to be the recipient of crap baked goods at the holidays, and I certainly don’t want to be accused of distributing crap baked goods, so I decided to test a few recipes first before tying a lovely bow on some cello-wrap over the bread and handing it over to my loved ones. Somehow, I had skipped the fear-phase of panettone making and had just blindly forged on to the testing of recipes.

This first loaf was quickly assembled and quick to rise, but I wasn’t madly in love with it. When in love with panettone, I typically will compulsively eat the loaf. Oh how I love the candied bits of citron. But this first homemade panettone did not have that effect on me – so I continued my search, still in pursuit of the perfect panettone recipe. In my meanderings through the vast world of panettone recipes on the internet, I found a one at Epicurious, which I have yet to try, though it is on the docket. Right after Apple Pandowdy. One of the comments following the recipe made me nervous: “the rising time was about 13 hours!”. Okay. Good to know. Another comment made me more nervous: “I’ve read that if kneading by hand, you have to knead for 50 minutes. If kneading by machine, it’s 20 minutes.” Egads. Really, maybe Del Conte was right. Maybe I should forgo the panettone quest. However, I’ve found that many culinary endeavors – such as pie crust or souffles – have mythology built around their difficulty or their ability to try the cook’s patience, and this invariably ends up being just that – a myth. So I decided to continue on in pursuit of the perfect homemade panettone. Of course, the fact that I am unemployed and therefore do actually have thirteen hours available to wait for dough to rise makes it easier for me to soldier on. And the added fact that as a result of being unemployed, I’m better able to afford flour and candied citron than jewels or electronics for gift-giving made it more appealing to continue in my pursuit.

The Gastronomy of Italy informed me that panettone as we now know it was created in Milan, and was known as panettone di Milano when it was first created. In fact, there is a creation myth for the panettone di Milano (and why not?). The myth says that panettone was the result of a Milanese aristocrat falling in love with the daughter of a baker with the surname Toni. The aristocrat knew that their cross-class relationship wouldn’t work, so he would have to change classes, and so he became the baker’s assistant. At that time, every bakery created a large loaf of bread, known as Pan Grande, which had a cross sliced into the top. The aristocrat reworked the recipe to include more butter and more eggs, and then added candied citron and orange peel. Before long, all of the society ladies of Milan were buying up this Pan di Toni, and later the name was contracted to Panettone. This is a very romantic story, and one which I like very much, but to burst our little romance bubble, it turns out that this story cannot be verified (what?) and the creation of Panettone di Milano is attributed to a gentleman named Motta in the 1920s. Together with Alemagna, the Motta company is one of the biggest producers of Panettone. Panettone was traditionally produced only for the Christmas holiday, but is now produced year-round and exported around the world. My panettone will not be exported around the world – it probably won’t make it out of Massachusetts – but my second attempt yielded results that could be characterized as “inspiring compulsive eating”. In other words, success.

This recipe, which I found at the King Arthur Flour website, does require a long rise. At least in my house it did. The first rise took about two hours, and the second rise about eight hours. The temperature of your house does impact the rising time, and the warmer the space, the more quickly it the bread will rise. However, you can only rush it so much, so I would just let it take its course without increasing your heating bill in an attempt to speed up the process. This panettone requires a biga, which is Italian for starter. The biga comes together easily, and I recommend making it in the morning and letting it sit for the 8 to 12 hours required while you go about your daily business. Then, in the evening, make the dough, let it rise for 1-2 hours, then knead in the fruit, and let it have its second rise overnight. This allows you to be productively dreaming away while it rises rather than grousing over the time commitment, and there will be no cloud of perceived patience-trying hanging over your appreciation of the bread.

Adapted from King Arthur Flour
For the biga:
For the dough:

For the biga:
For the dough: 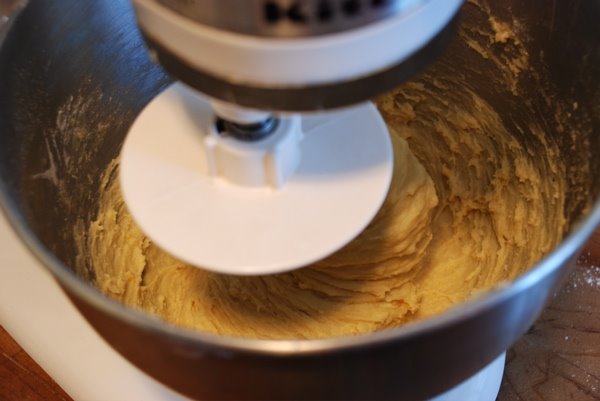 the dough is sticky & sticks to the sides of the mixing bowl – not to worry, just scrape the side-dwelling dough down to incorporate it into the rest of the dough when you turn it out onto the counter to do a quick hand-kneading. 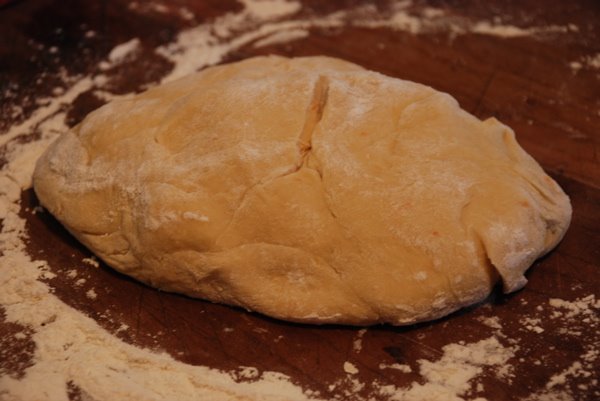 the dough prior to its first rise 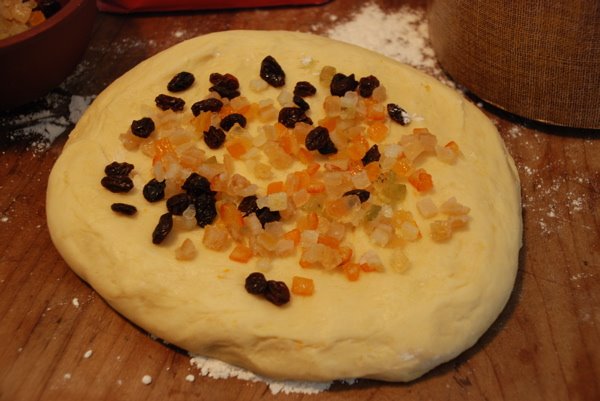 the first phase of adding fruit to the dough 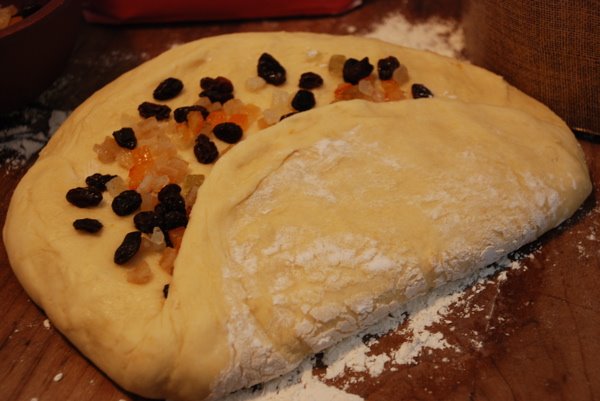 fold the “corner” of the dough over the fruit 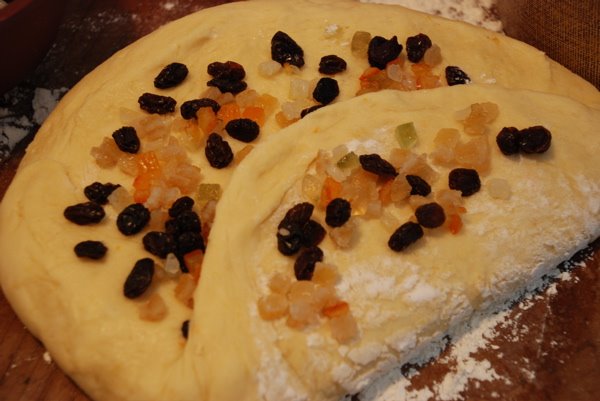 top the fold with fruit 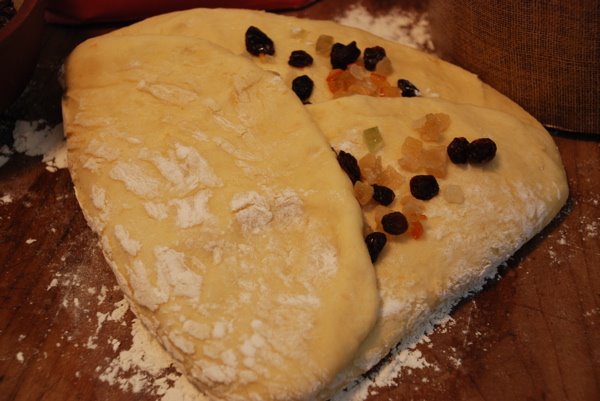 fold the other “corner” over – top it with fruit 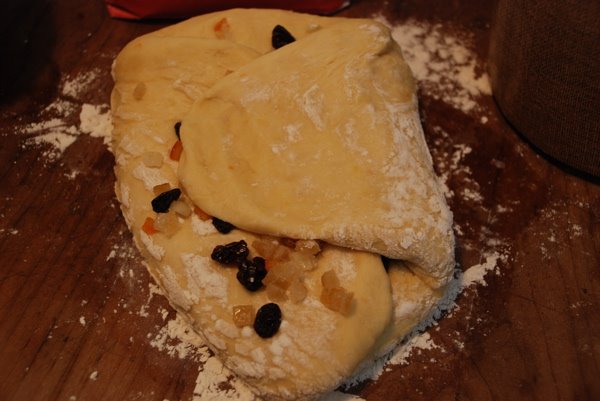 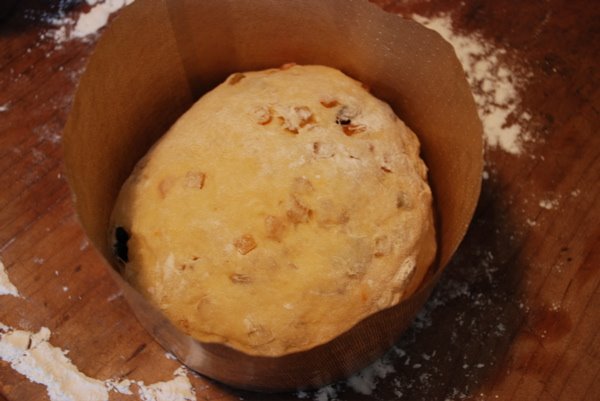 place the dough in a panettone pan or paper panettone pan & let rise again. It has a way to go before it crests over the top of the pan, as you can see.

Dinner tonight: leftover Bolognese, probably as a lasagna, though as I am baking peanut butter cookies, chocolate chip cookies, Panettone, and apple cakes tonight, it could wind up being Bolognese with pasta. I’ll pretend I’m ambitious, though, and we’ll estimate the cost for the lasagna. Estimated cost for two: $3.77. The sauce cost $8.29 as made in the Untraditional Bolognese post, we had 2 servings of it over pasta on the night I made it, so 6 servings are going into the lasagna, and that’s $6.22. The lasagna noodles are one-half of a box that cost $1.59, so that’s 80-cents. The Bechamel sauce consists of 4 cups of milk which was $1.39, the butter was 43-cents, the flour was 6-cents at $3.99 for 76 quarter-cups per 5 pound bag, and we used the less-expensive, already grated, but still real – no green jars of faux cheese for us – parmigiano-reggiano from Venda Ravioli, 3 ounces of that cost us $2.43. The total cost for the lasagna is $11.33, and that works out to $1.88 per serving. Happily, this will keep us covered for dinner options through Christmas Eve as all of my cooking and baking energy is now focused on treats for gift-giving, and Christmas dinner fare. Speaking of which, Happy Holidays to you!