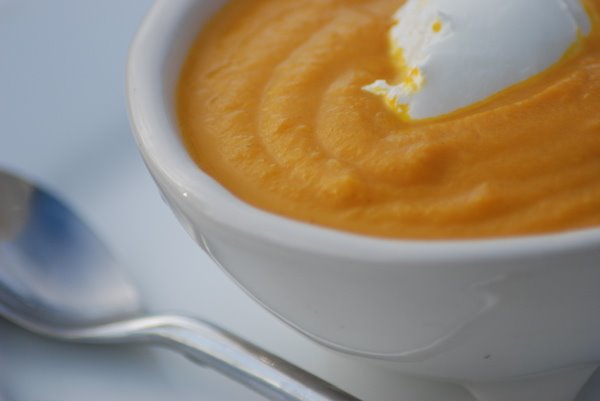 I have some semolina and cornmeal bread on its second rise in the house right now, its primary purpose to complement the roasted fennel and carrot soup I made on Wednesday night. JR and I were both taken aback by how good the soup was – oh, and don’t even get me started on the honeyed mascarpone – but JR’s lone complaint was that it required some toast to round it out. Toast with sweet cream butter, in fact. So today, we will have the fennel and carrot soup masterpiece for lunch with a toasty, crunchy, buttery friend. I recommend you do the same, so here is the soup recipe to help facilitate that goal.

Dinner tonight: Untraditional Bolognese Sauce with Rigatoni. Estimated cost for two: $6.24. The ground meat was $3.79 per pound at Venda Ravioli, the carrot, celery, and onion for the soffrito (which is the slowly simmered base of the sauce) were about $1.00, the tomatoes were $2.00, and the amount of milk I’ll use in the sauce will be about 50-cents. I’m also using anchovy paste and a bit of tomato paste, so let’s call those $1.00, to be generous about it. And don’t go all nose-scrunchy on me about the anchovy paste. The purpose of the anchovy paste is to add a depth of flavor to the sauce that is indistinguishable as anchovy, but instead, adds to the savory quality of the sauce. The total cost of the sauce is $8.29 for approximately 8 servings, so $1.04 per person for that. The pasta was $2.79 for the box (not Whole Foods store brand this time, but De Cecco instead, which I had purchased a while ago at Whole Foods (check out the De Cecco link if you think you want to buy by the case – it’s only $1.75/box). I’m completely sold on the Whole Foods store brand bronze-die (traditional method) pastas, which are a bargain at less than half the price of my favorite imported bronze-die, air-dried pastas), and we’ll use half of the box. We’ll use the pre-grated parmigiano-reggiano from Venda Ravioli, which costs $12.99/pound, and we’ll use about an ounce of that each, so $1.62 for that. I will put a good sized dollop of mascarpone on the very top of the mountain of rigatoni and sauce, so we’ll call that $1.14 at 57-cents per ounce. Making the bolognese tonight will allow me to whip up a bechamel sauce tomorrow and fashion a lasagna out of the leftovers, which will be ultra-convenient for us early in the week when we’re both a bit over scheduled, and will also be a perfect culinary answer to the snow and cold we’re expecting.