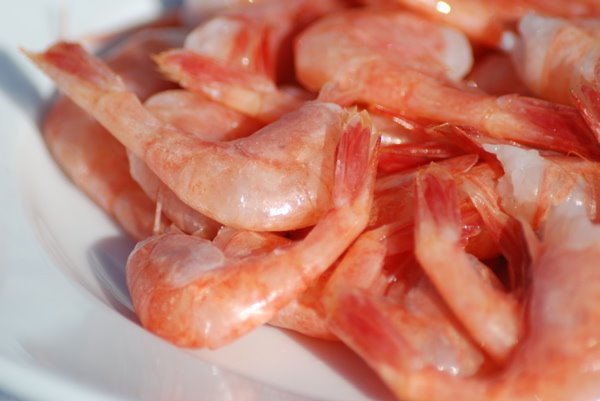 And by shrimpy-shrimp, I do mean small shrimp. As I was discussing with my friend Debby this morning, I wasn’t so sure I would serve these shrimp to guests, but then she described a conversation she had with a friend of hers regarding shrimp, which caused me to reevaluate my stance on the shrimpy-shrimp. It seems Debby had served Thai shrimp at a recent dinner for her friends, and one of her friends noted that they had no taste. Actually, the friend’s mother initially pointed this out to the friend who then shared it with Debby, but no matter. The fact is, those previously frozen imported shrimp do not have any taste. But the shrimpy-shrimp JR and I had were fresh Maine shrimp, and they were actually quite sweet and tasty, if small. And a half-pound for the two of us was certainly adequate. As an added bonus, they were on sale and they cost only $2.00 for the half-pound in our tasty shrimpy-shrimp meal. At regular price, they’d be $3.00 for a half-pound – oh, and did I mention that they taste – so in either pricing scenario, that’s well worth it. If you have the opportunity to purchase locally-caught shrimp instead of those tasteless frozen imports, you must do so. I insist. You will be amazed at the difference. And, as Debby said to me, you should serve them to guests. They taste like something.

Print
Shrimp with Broccoli and Linguine in a Garlicky-Lemon Sauce

For four people, even presuming that you purchase the shrimp at regular price, the cost is $13.87. If you purchased the shrimp on sale, it would be $11.87 The shrimp are $5.99/pound regularly, and were $3.99/pound on sale at Whole Foods. The linguine is $1.99 for a one-pound box of Whole Foods store brand fancy bronze die pasta. You can buy less expensive pasta if you like, but the bronze-dye type has better texture in my opinion. The lemons are $1.00, the butter and oil are 35-cents and 33-cents respectively. We’ll call the garlic 30-cents. The shallot is 25-cents. The one cup of wine should not cost more than $1.67 if it is 1/3rd of a $5.00 bottle that you bought expressly for the purpose of cooking. And you should not spend more than $5.00 on a bottle of wine for cooking. Finally, the broccoli is $1.99 per pound. My friend Debby says you can serve shrimpy-shrimp to guests, so you’d better believe you can.