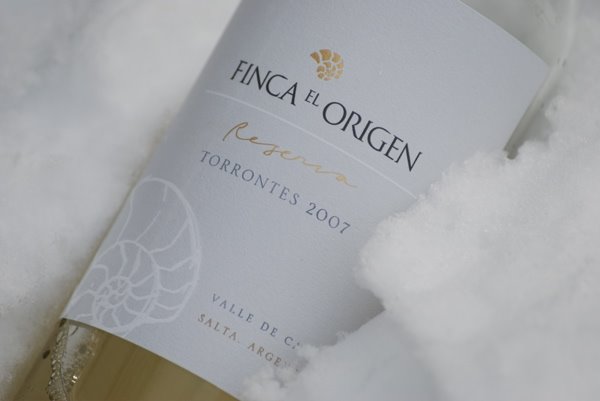 using the outdoor snow cooler to keep the Torrontes “refrigerated”

What’s this? A white wine? In honor of the white snow? Or perhaps because I wish I were in Argentina – from whence this wine comes – soaking up the summer sun rather than New England surrounded by a foot of fresh snow at this moment? I’m not sure I can come up with an adequate rationale for my mid-winter, sub-zero temperatures, foot-of-new-snow on the ground consumption of white wine, but perhaps this will make the reason more clear. While I never follow the mandate “white with fish and chicken” and “red with meat”, I found it a little outside the reaches of good taste to pair the shrimp with broccoli and linguine in a garlicky-lemon sauce that we had the other night with a red wine, even a light red wine. I dispatched myself to the wine rack, which holds only a few whites, and found this Argentine Torrontes that I had purchased a little over a month ago, and figured I would give it its moment to shine, as I imagined it had been awaiting this very occasion. Like I said, I imagined it, as I am apparently in the habit of ascribing anthropomorphic qualities to bottles of wine in my wine rack. Perhaps because I think of them like friends. Albeit liquid friends that I ingest with some regularity. It might not be the healthiest friendship for them, then, but it sure does work for me.

Torrontes is a grape varietal that is grown solely in Argentina, though recent studies reveal that it is genetically the same as Malvasia, a white grape grown in Mediterranean countries. There is speculation that Torrontes was, in fact, introduced to Argentina by Spanish missionaries, and quite a while ago – as in when Spanish missionaries first arrived in Argentina – as Argentines consider Torrontes their national white grape, so their collective memory does not seem to recall a time before Torrontes. Regardless of collective memory problems, Torrontes, as is the case with many Argentine wines, provides a great value and can routinely be found for $10 to $12 per bottle, and at a consistent level of quality at that price.

My friend Mark at Gasbarro’s Wines in Providence recommended this particular bottle, Finca el Origen Torrontes Riserva, to me with the caveat that while it was a good wine as an aperitif or with snacks, it might be best relegated to snack-accompaniment, rather than dinner-accompaniment. You may recall Finca el Origen from the review on their Malbec vineyards are 2000 meters above sea level in the I did back in December. They own all of their own vineyards, so they are able to better regulate the viticulture of the grapes. I’ll wager it’s much warmer there, even at 2000 meters above sea level, than it is here in lovely New England, but then, I digress. We’re talking about wine here, not the unfortunate northeastern winter, after all. I have to say that I found it to be a very crisp and pleasant wine, and while it had tropical fruit on the nose, I only detected pineapple – and just mildly – in my tasting of the wine. The typical aroma profile of Torrontes includes passion fruit and lychee, which I have to admit would not be recognizable enough from my eating and smelling experience to register in my casual quaffing of this wine, but I did pick up a bit of honey aroma in addition to my general “tropical fruit” assessment. Though I did not snack while drinking this wine – unless you’d like to count the lemon juice that squirted into my face while making the shrimp dinner – I found that it worked well with the lemon of the sauce and the sweetness of the shrimp. I’ll get into the sweetness of the shrimp in a subsequent post, but if you live where you can buy locally caught shrimp, you will be rewarded with shrimp that actually tastes, and so I highly recommend that you get yourself to your fishmonger and buy away.

For ten-dollars a bottle, even with the additional caveat that white wine does not always excite me, this was a very good value, was refreshing (in the event that the negative 6 degrees outside wasn’t refreshing enough), and worked well with tasty shrimp and lemon. And garlic. If you’re looking for a change of pace from Pinot Grigio or if you want to get away from oaky Chardonnay, I recommend you give Torrontes a try. Preferably in Argentina during their summer months, but if that’s out of reach, a glass might just transport you away from the winter doldrums back home.

Dinner tonight: Pork Schnitzel with Mushrooms and Orzo. Now, schnitzel is a term that I could have replaced with “Breaded Pork Cutlets”, but I thought I’d be true to its origins and call it schnitzel. Estimated cost for two: $6.29. The pork cutlets cost $2.21 for 3 cutlets. Two are for us to eat, one if for me to photograph for the Pork Schnitzel post, but I’m sure it will make its way into JR’s lunch once it’s had its close-up. The mushrooms were $2.25 for 10 ounces, a little more expensive than the farm stand, but the farm stand is closed until April, so there we are. I will use butter and oil to saute the mushrooms and will start that saute with a shallot, so it should be around 38-cents for fats, and 25-cents for the shallot. The orzo is $1.00 as it is half of a box that cost $1.99. I’ll stir a little butter into the orzo as well, and that will be around 20-cents. The mushrooms and orzo will be the most time-consuming part of the cooking, as the schnitzel will take about 2 minutes per side once it is breaded, so it seems like an ideal weeknight meal.