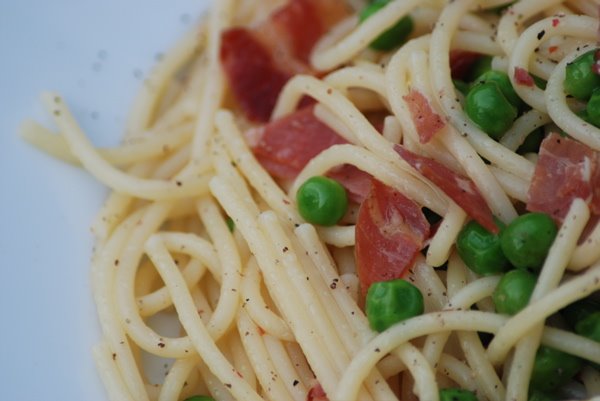 I was on the fence about what to have for dinner tonight – pancetta and peas or the last of the ribollita (Tuscan bean and vegetable) soup, but selecting the photographs for today’s post has ended my quandary. Pancetta and peas it is.

Pancetta is an Italian cured pork product. It is also produced in Spain, and in both cases, it is the same cut of the pig – the belly – that is used to produce bacon. Unlike bacon, pancetta is not smoked, so it doesn’t present itself in as pronounced a manner as bacon, though it does add a nice saltiness to a dish without overwhelming it as a smoked bacon might. Pancetta is also used as the base to many Italian pasta sauces, and is traditionally used in Bolognese sauce, though, in an effort to keep the cost of my untraditional version of Bolognese down, I omit it. Pancetta is a natural companion for peas as its saltiness pairs beautifully with the sweetness of the peas. It is slightly more expensive than bacon, at $8.29 per pound at my local Italian market, while bacon averages around $4.99 per pound, but it is worth it for the nuance of flavor it provides, and you don’t need more than two ounces per person to produce an incredibly satisfying dish. In fact, you could probably get away with closer to an ounce each, but just in case you have a large appetite, we’ll go with two ounces per mangiatore (eater). When you see the 1/2 teaspoon of crushed red pepper in the ingredient list, you may become alarmed, but this little tidbit should assuage your fears: generally speaking, JR does not love spice-generated heat in his food, but for this dish, he happily makes an exception. If he can do it, so can you, so try it spicy first – scale it back to 1/4 teaspoon if you’re unconvinced – and if you don’t like it, which I think is nearly impossible, omit the hot pepper the next time you make it. Because believe you me, there will be a next time. 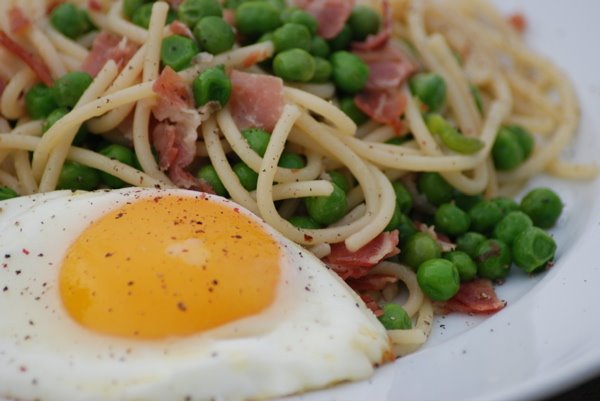 Print
Pancetta and Peas with Spaghetti and Egg

This dish is quick to prepare, which, in addition to being inexpensive, is a nice feature. Including the time it takes for the water to come to a boil, the first bite of pasta, pancetta, peas, and runny egg yolk is on your fork in about 35 minutes. To make this for four costs $8.95. The pancetta is $8.29 per pound, so 1/2 pound is $4.15. The olive oil is around 55-cents for both the pancetta and the egg portion of the meal. The shallot is around 25-cents as I just bought 5 for less than $1.25 the other day, and the peas are roughly two-thirds of a bag that cost $1.29. The crushed red pepper probably put us out 10-cents. The pasta shouldn’t be any more than $1.99, and if you choose to use orecchiette, that should be no more than $1.79. The eggs are about 26-cents each, so we’ll call that $1.05, and the richness of the yolks replaces the need for any Parmigiano-Reggiano shaving, which is why it is employed here. To save a buck or two.