A ravioli primer: Artichoke Ravioli in a Lemon-Cream Sauce 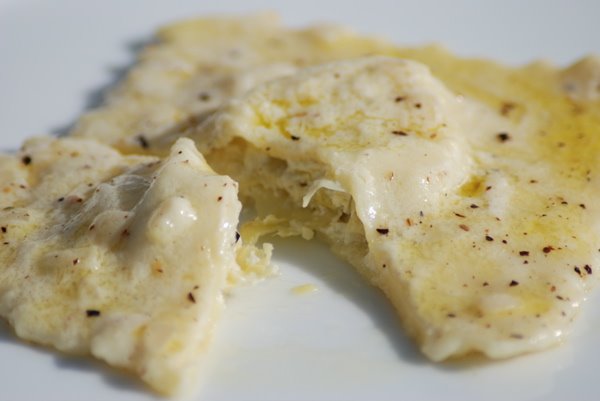 “I want to make ravioli for our Valentine’s dinner,” he said, meaning his and his wife, Kristin’s, dinner.

We discussed his options; won ton wrappers (“won’t that be gross?”), purchasing pasta in sheets and rolling it out himself (“the recipes I’ve been looking at mention stretching the dough – what does that mean?”), before finally settling on a solution.

“I’ll come over on Friday night with my pasta attachment and ravioli tools,” I said. There. Settled.

JR and I arrived around 7:30pm, bag o’ ravioli tools and a pasta rolling attachment in a brown paper grocery bag – my make-shift Doctor Ravioli house call satchel. Ian had promised to buy the wine – note to you, dear reader: should you ever desire a house call from Dr. Ravs (aka: me), free wine is a powerful incentive. Just so you know.

We immediately set to work, Ian’s wife, Kristin, wondering aloud, “So, how did you get roped into this?” Apparently, she didn’t notice me fillilng my glass with wine from the open bottle on their counter, but no matter. We set up their stand mixer and blended the Italian “tipo 00″ flour, which is made specifically for pasta-making and pizza crusts, along with a splash of olive oil, a pinch of kosher salt, and five eggs. Once the dough came together, we took turns kneading it.

“Could you spell that?”

“Yeah, right,” he responded. I thought I detected a hint of sarcasm in his voice, to be perfectly honest.

About ten minutes later, with JR barking out commands from his seat at the kitchen table – commands that would eventually earn him the moniker of Foreman – Ian took up the last leg of kneading and brought the dough to a silken consistency. Everyone was thrilled and amazed. Ian especially. And not in a sarcastic kind of way, either. As an added bonus, Ian and Kristin’s four-year old daughter found the dough fascinating; she did not miss an opportunity to make indentations into it with her fingers. Her younger sister wasn’t so confident that it wouldn’t grab back, so she passed on her opportunity to poke at the dough.

With everyone content with their interaction with the dough, we wrapped it in plastic wrap and set it in the refrigerator to rest for a half-hour while Ian made his filling, and JR assaulted him with instruction – generally in terms of what he was doing wrong.

Ian had chosen to make a lobster ravioli for his and Kristin’s dinner, but had gone a bit hog-wild with his lobster purchase and brought home double what was required for the recipe he had selected. We watched as he placed the lobster in the food processor, added the ricotta, the shallot, and the egg, JR commenting all the while. When it really got good was when JR began instruction on how to cut, peel and pit a mango, proceeding to relay a brief story that began “you know, when I lived in Hawai’i, I picked mangoes off the trees in my backyard.” Showoff. But he was repaid with many unkind words, such as showoff, and even more descriptive terms, to the point where I think Ian, Kristin, and I were ok with the fact that we had never lived in Hawai’i.

Still, in spite of the torment – both being told how to make the filling and being regaled with talk of Hawai’i when we live in cold and dreary New England – Ian successfully finished making the filling, and we started into the rolling-out-the-dough process.

We cut the ball of dough into four pieces, shaping them – to the best of our ability – into rectangles. We then used a rolling pin to flatten the dough out such that the edge would fit into the widest setting on the pasta roller attachment, and began rolling the dough out through the attachement. We passed it through twice on each of the first 4 settings, and then began cutting out the ravioli squares with a ravioli cutter. This is by far the most time-consuming way to make ravioli in my experience, but the ravioli look much more lovely, and for a Valentine’s Day dinner, it’s worth the effort to make them pretty. It didn’t hurt that we now had three people working on the ravioli-creation: Ian, Kristin, and me. Ian rolled out the pasta, I cut the ravioli shapes, and Kristin moved the squares to a baking sheet lined with plastic wrap and dusted with flour. When the ravioli squares covered the entire surface of the baking sheet, she dusted them with flour, draped another sheet of plastic wrap over them, and dusted that with flour. Because Ian had such a large quantity of filling for his ravioli, we made 84 ravioli squares, and then the three of us set to the task of filling the ravioli squares, but not without JR chiming in with instruction now and again, this time from the couch in the adjacent living room as he watched George Lopez or some other golfing celebrity/celebrity golfer speak directly to the camera at the Pebble Beach Pro-Am.

For each ravioli, you, of course, need two squares of pasta. Kristin perfected the wetting-the-dough technique, and so it goes like this: get a small bowl, like a cereal bowl, and fill it part-way with warm water. Dip your index finger into the bowl to wet slightly. Run your finger around the edge of the pasta square to lightly moisten it – the pasta does not need to take a bath during this process – wetting your finger as needed to moisten all edges of both squares. Now, choose a square and place about a tablespoon of filling into the middle of it. Take the non-chosen square (the one without the filling on top of it), and line up one edge of the square against the edge of the chosen square. Now take one of the two perpendicular edges and seal the two squares together along that edge. At this point, you may need to use your fingers or a small spoon to tuck the filling back into the ravioli so that you can successfully close the remaining two sides. Before you seal the fourth side, be sure to gently expel any air from the inside of the ravioli. Viola! You’ve made a ravioli by hand. Now place it on a baking sheet that is lined with plastic wrap dusted with flour and repeat until you have constructed – ideally through teamwork – 42 ravioli. If you aren’t serving until the next night, place the baking sheet containing them in the freezer for at least an hour and then transfer to a freezer-safe container or large plastic storage bag. If you cover them well enough on the baking sheet and are only going to cook them the next night, you can leave them on the baking sheet.

We were all a little exhausted after the pasta-making was completed – even JR, who seemed pleased that we didn’t mess up the ravioli, thanks, of course, to his instruction. We had consumed less wine than we had hoped, given all the hands-on labor involved, but we had 42 very lovely looking raviolis, a third of which were made in Ian’s style, a third of which were made in Kristin’s style (the most restaurant-worthy of the bunch, I think), and a third of which were made in my style – lots of pasta around the edges and a golf ball of lobster-mango filling in the middle. Perhaps it was the influence of the Pebble Beach Pro-Am? Or just the instruction of the man watching it. Who can know? Ian agreed that pasta-making was easy, if labor-intensive, but he pointed out that I didn’t measure the ingredients for the pasta dough recipe, so he wouldn’t know how to do it on his own. I’m tricky when I know there could be free wine in my future, you know.

JR and I did wind up eating the lobster ravioli with Kristin and Ian – leaving many, many for a future dinner, might I add, and on Sunday, I made a batch of much-less-expensive-than-lobster Artichoke Ravioli which we served with a Lemon-Cream sauce. This recipe won’t make 42 ravioli, but it should make in the 28-30 ravioli range, and 5 of these ravioli is certainly enough. Very, very, very filling.

For the fresh pasta
For the ricotta-artichoke filling
For the Lemon-Cream Sauce:

The Lemon-Cream Sauce in conjunction with the Artichoke Ravioli really helps to break up the monotony of winter with its bright, tangy flavor. If you’d like to go all-out, you could sprinkle each serving with a little bit of grated Pecorino-Romano and toasted pine nuts, but it’s delicious all on its own as well, and costs only $11.85 for the ravioli and sauce.

You could also choose to stuff cooked pasta shells or roll cooked lasagna noodles with the filling for an faster take on this meal, then top with the sauce and bake to warm everything through, if you’re looking to get out of the whole handmade pasta task, that is.

Dinner tonight: Leftover Artichoke Ravioli in a Lemon-Cream Sauce. Estimated cost for two: $3.95. Even JR cannot eat more than 5 ravioli, so this is 6 servings in my house. And you can see how it all breaks down above, so I won’t bore you by repeating those details again.

15 Comments to A ravioli primer: Artichoke Ravioli in a Lemon-Cream Sauce