The Simplest of Egg Salads 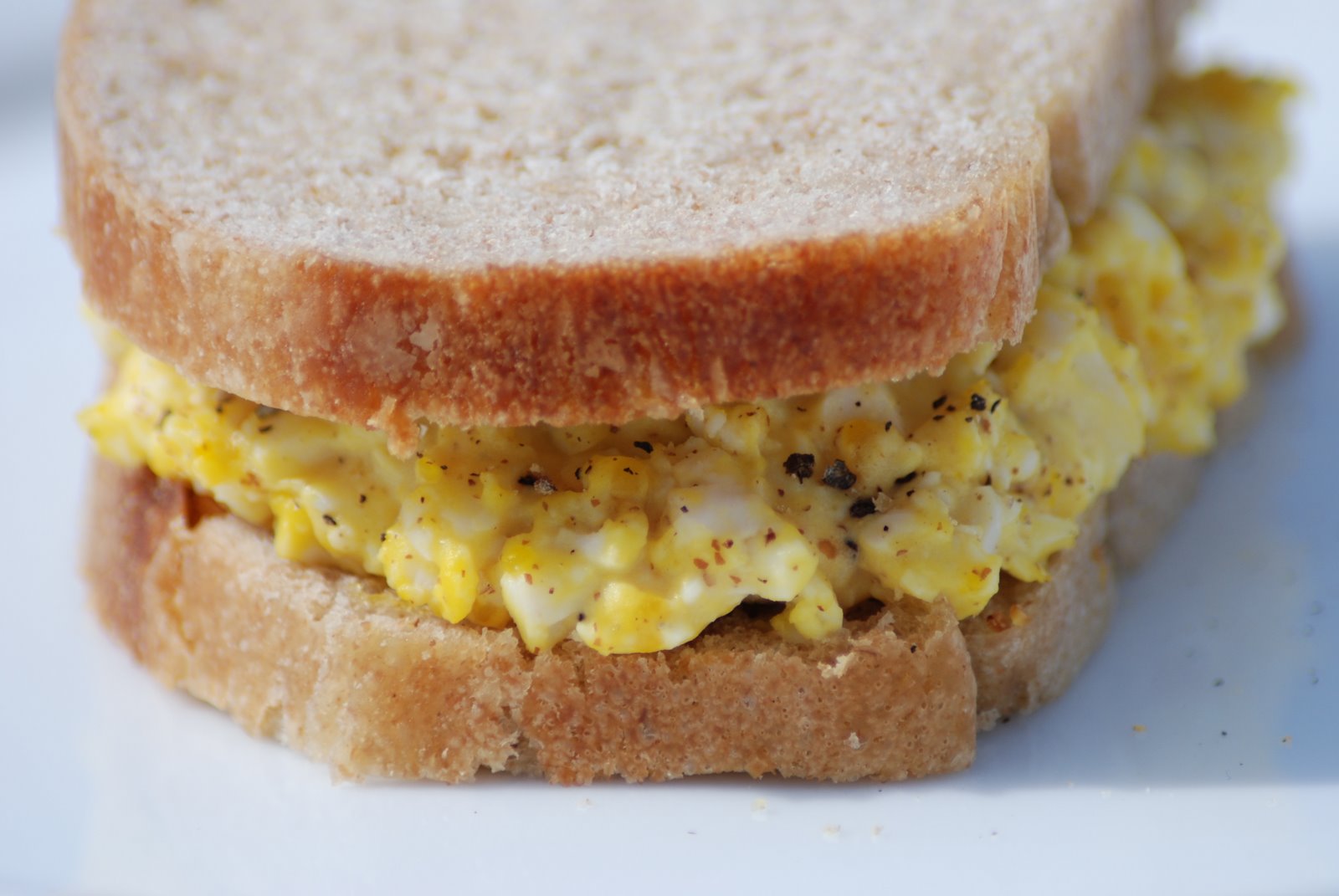 When my sister first lived on her own, she would often call my mother for cooking advice. In hindsight, she might wish that the interwebs and its vast array of food knowledge had been available to her back in 1995, for she now endures much ribbing for some of those novice questions. For example, their corn-cooking exchange lives in infamy and is oft repeated at family gatherings. It went something like this:

Likewise, she once called my mother to inquire as to how one goes about hard boiling an egg. Now, this may elicit a snide comment or two, but, in her defense, it’s not quite as obvious as boil some water, throw an egg in, and take it out a bit later. In fact, you do not want to boil the water, you want a nice, gentle simmer. And then there is the matter of overcooking. Overcooking leads to the disappointment of splitting through the shiny egg white only to find that your prize is not a golden-yellow creamy yolk, but is instead a green-gray yolk of mouth-drying texture. Not pretty, not terribly palatable, and also quite smelly, what with all that sulfur now wafting through the air. So you need to be careful when gently simmering your eggs so as to avoid a dingy-looking yolk and some unappetizing stank. Unless, of course, you like that sort of thing. In which case, I’m not quite certain what you’re doing here. Move on. Go, now. Shoo.

For those of you whom “shoo” did not deter, the ideal conditions for your “hard boiled” eggs start with enough water to submerge your eggs by at least an inch in a large saucepan. Said water should be brought to a nice, gentle simmer – not a full rolling boil – over medium high heat, and then the eggs should be added. I use a slotted spoon to lower each egg into the pot so as not to crack the shell and find cumulus fractus clouds of cooked whites floating around the pot when next I turn to check upon the eggs. You do want to check back on the eggs a couple of times during the cooking process to be sure that you haven’t either lost your gentle simmer on too low a heat, or inadvertently generated a full rolling boil. Anathema to the bright yellow cooked yolk, as that full rolling boil is. The eggs should cook for 12 to 13 minutes, then be removed from the pot tout suite, and quickly submerged in a waiting bowl of ice water to stop the cooking process. Allow to cool, and then do with them as you will. Yesterday, I made the simplest of egg salads, but one that JR and I both find rather addictive.

Print
The Simplest of Egg Salads

Yield: Enough for 4 sandwiches if you can keep from shoveling fork fulls into your mouth prior to making them thar sandwiches.

If the chives were already up in my garden – which they are not for it is still freaking winter here, people – I would toss in a tablespoon of those as well, but those days are still at least a month away, so The Simplest it is.

Dinner tonight: Rigatoni with Pancetta and Roasted Butternut Squash. Estimated cost for two: $5.61. The rigatoni is 1/2 of a box that I bought on sale for $1.00, so that’s 50-cents. The pancetta is 1/4 pound at $8.29/pound. I ordered a half-pound, which, inexact science that meat-cutting is, was slightly over, and it cost $4.23. Half of that is roughly $2.12. The butternut squash I am using is one that I purchased from my neighbor’s farm stand for 50-cents. It is around 2 pounds unpeeled and unseeded, so if you had purchased it at the grocery store, it should be around 79-cents per pound, and we’ll call that $1.60. The oil for the dish will be around 45-cents, and the shallot is 25-cents. I will grate some Pecorino-Romano over this dish, and at $10.99/pound, I won’t use more than one ounce, so that’s around 69-cents. Our actual cost with the 50-cent butternut squash is $4.51, so be on the lookout for neighborhood farm stands during the growing season, ok? Psssst – it’ll save you money.

2 Comments to The Simplest of Egg Salads