Memories of Zucchini Blossoms Past 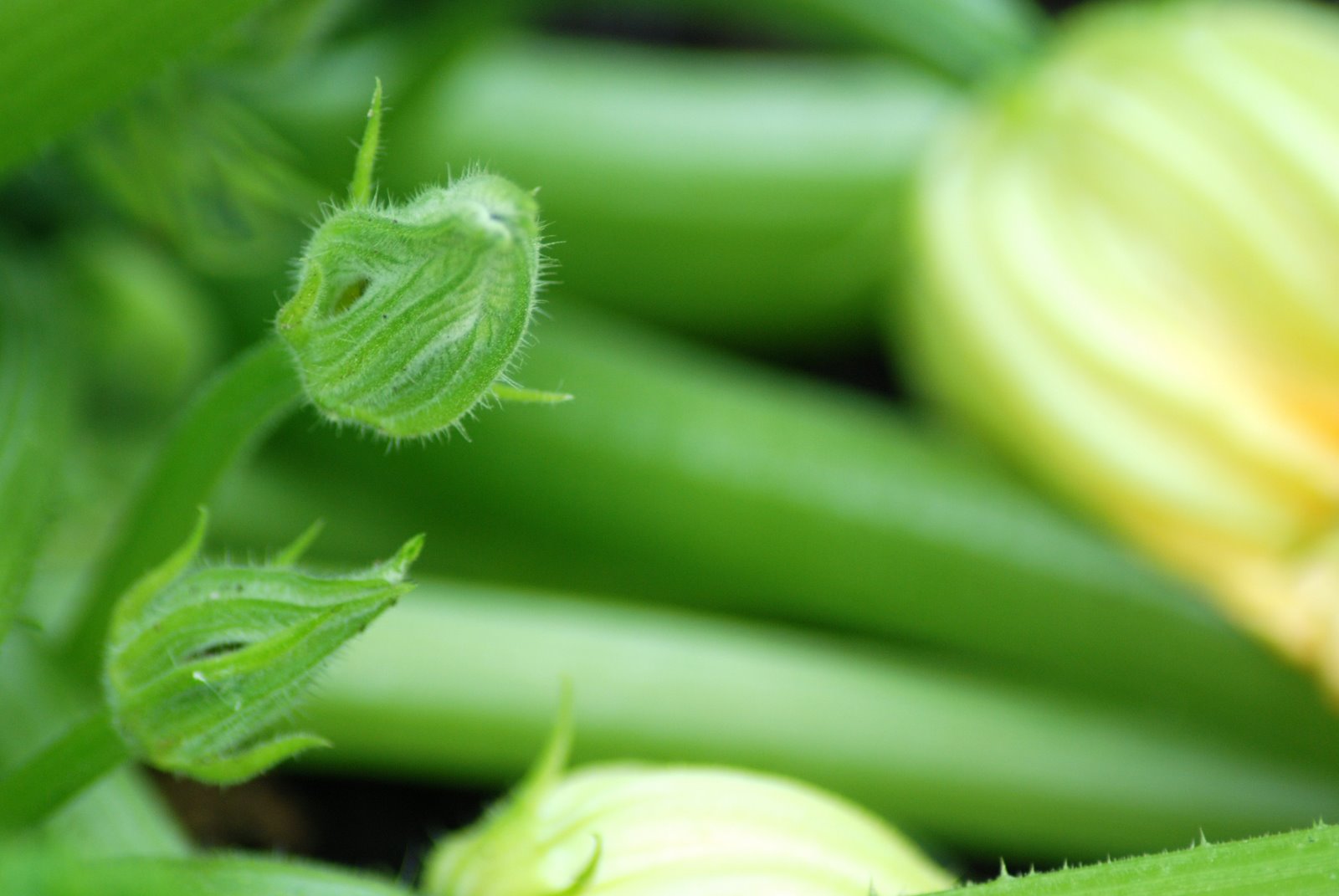 Despite the Northeast’s dreary weather conditions for what now seems like months, not weeks, the garden marches on. It rewards us with the promise of copious zucchini blossoms, showing at least the squash’s appreciation of my pest management. I have progressed from the Jar of Death method I had used prior to the constant rains, to my current method of squishing squash beetles between my fingers and sometimes chopping their little beetleheads off with my fingernails. Yes. I did just write that. Chop chop, little beetleheads. I am clearly an angry human, going to such lengths to protect my squash and blossom harvest.

The Jar of Death, a mixture of soapy water and rubbing alcohol – if its name hadn’t indicated, it is not a friendly mixture held therein – had become too cumbersome as I ran from plant to plant between raindrops, carefully fetching each tiny yellow and black marauder with a pair of tweezers. Best to be quick about it when trying to stay dry in this weather, and, as it turns out, fingers are highly specialized tools, quite adept at squishing – simplifying what had been a two-step process, tweeze then drop into toxic mixture, into a much more efficient one-step action.

In years past – it should be noted I was overemployed, as opposed to the under that I am now – my squash were robust for a week or two. I’d gaze at them over the garden fence – only briefly, and most likely on a Saturday before hurrying off to run errands. By the following Saturday, I would find them, drooping leaves, rotting fruit, and a very happy colony of squash beetles having a festa at the expense of our food.

Now that it’s more of a necessity to be vigilant – I am using the garden as my grocery store this summer, after all – I find that killing squash beetles is rather gratifying. While I recognize the disturbing nature of that statement, perhaps it’s a cathartic act, releasing the stored horror of finding decimated squash plants in years past; or perhaps it gives me a sense of retribution. Psychological motivation aside, I do appear obsessed. I count each day’s kill (15 so far today), marveling at how many squash beetles there are in the world. I imagine victory: a day when nary a beetle will be found in my garden. When the beetles see my shadow (not as easily detected under the cloud-filled sky, much to their chagrin, I’m sure), they fly away. “Do you think they know you’re coming,” JR asks, “like, know it’s you?” Now, I’m not that crazy. I’m pretty certain all bugs instinctively sense a predator, and I am most definitely that. While I might like to think I am putting the fear of whatever it is that bugs hold holy in them, I’m slightly more rational than to think that they know me. Though I am considering quoting scripture in a booming voice – perhaps Ezekiel 25:17 – the next time I enter the garden. Considering it, I said.

By next week, we will be rewarded for my bordering-on-insanity vigilance. I will try to replicate the fried zucchini blossoms that we first had on a one-day stopover in Napoli. I say Napoli to distinguish it as the Naples of Italy, not the Naples of Florida, lest you be confused. The flowers of zucchini are sexed, with the females producing the fruit and the males just kind of hanging around growing enlarged stems. I do not make this stuff up. It’s actually happening in my garden as I type (note the photograph above should you doubt me. See the enlarged stems below the green flowers? Yep. That’s what I’m talking about. Those will not become zucchini.). The males, fruitless as they are, are then used for various preparations – sautes, risotto, or, quite often, stuffed, or stuffed and fried. While the male flowers in my garden are not quite ready for any preparation just yet – green as they are – next week, I will chop up their enlarged stems, saute them with shallot, let them cool, and then mix them with fresh ricotta before stuffing this mixture into the flower. I will then batter them lightly and fry them up quickly. I’m so looking forward to it, I’ve already brought my deep fry pot, a completely unnecessary but gloriously handy wedding gift that has been too long squirreled away, up from the basement. Following a much-needed washing, it now sits on the drying rack on my tiny counter awaiting its big day. When will it be? Tuesday? Wednesday? Oh, I can but barely wait.

During the F1-style ride from the Napoli airport to the hotel, our cab driver tipped us off to a pizzeria just a few blocks from our hotel. We walked, damp with perspiration in the heavy, humid air, passing multiple teams of carabinieri – automatic-weapon toting national police – stationed at various street corners, along a very long, dark main street, to an awning-covered sidewalk seating area, nearly empty at our arrival, eight o’clock. It didn’t take long, though, for the metal chairs to fill. We were the only English-speakers there, and as the wine flowed, my Italian vastly improved. In my opinion, anyway. I’m sure my made-that-night Italian friends still laugh at some of my statements, the butchering I gave to their language causing them fits of belly-laughter. I asked for a light for my cigarette – I no longer smoke, but if I return to Napoli, I think I might – and the gentleman at the table next to us happily obliged. Over this match-light, JR and I made small talk with he and his wife, laughing and joking, all of us, spirits high with thoughts of the impending pizza arrival. The antipasti that JR and I ordered consisted of grilled marinated eggplant and zucchini blossoms. Ahhh, and what a revelation those blossoms were with their crunchy exterior and flower petal-soft interior. And yet, they were merely a tease for the pizza that arrived next, crisp, yet chewy, sparingly dotted with melted fresh mozzerella, the curst charred just so – one of the most memorable meals I’ve had in Italy, and certainly the least expensive of those legion deemed memorable.

Neither JR nor I have ever fully recovered from that meal. We seek out Neopolitan-style pizza here at home, and never quite find that same magic. Was it the people – our new Italian friends, the lilting conversations punctuated frequently with laughter, the summer air? Was it just Italy? Or even just Napoli – charming despite its rubbish, dirt, heavily-armed police, aspiring race-car driver cabbies, and cacophony of sirens and honking horns?

I’m sure I won’t be able to fully recapture the sensation of biting into that first fried zucchini blossom – and have a few days filled with anticipation before I can make the attempt – though I can hope – for sun, a meal outdoors, and a Napoli-worthy meal.

Dinner tonight: Sauteed Collard Greens, Sweet Italian Sausage, and Linguine. Estimated cost for two: $6.81. The collard greens are also quite bountiful in the garden. The seed starts cost me $2.60 for 6 plants. I’ll pretend that we’re eating an entire plant, though we are not, for we are only removing the exterior leaves of a couple of plants. That aside, one seed start cost 43-cents. If you purchased organic collards at Whole Foods, they would run you around $2.49, and I have seen conventionally grown collards at my regional chain grocery store for 79-cents per pound. I’ll calculate this based on buying the organic collards and using about half of the bunch, so $1.25. The sausage was $3.99/pound for I always stock up on Whole Foods’ store-made sausage when it is on sale (the freezer is your friend). We are having two links, which will be no more than 1/2-pound, so that’s $2.00. The pasta is the Whole Foods Market store brand bronze-die linguine, which costs $1.99 for a 1-pound box. We will use half of that, so $1.00. I will also use olive oil – around 33-cents-worth, roasted garlic for about 25-cents, and crushed red pepper for another 10-cents or so. I will shave some fancy Parmigiano-Reggiano over both of our dishes, but not more than an ounce, so at $29.99/pound, that adds $1.88. Were you to grow your own collards, you’d save about 82-cents (our garden is organic, as evidenced by my crushing bugs to death with my own fingers), and you can nearly always find pasta on sale for 10 for $10, so that would save you another 50-cents.

Posted by Amy • June 25, 2009 • 7 Comments • Leave a comment!
← Does this muffin a rhubarbist make?
Random Edibles from the Garden: Nasturtium Leaves →

7 Comments to Memories of Zucchini Blossoms Past