A Quick Bread of the Highest Order: Zucchini Pesto Bread 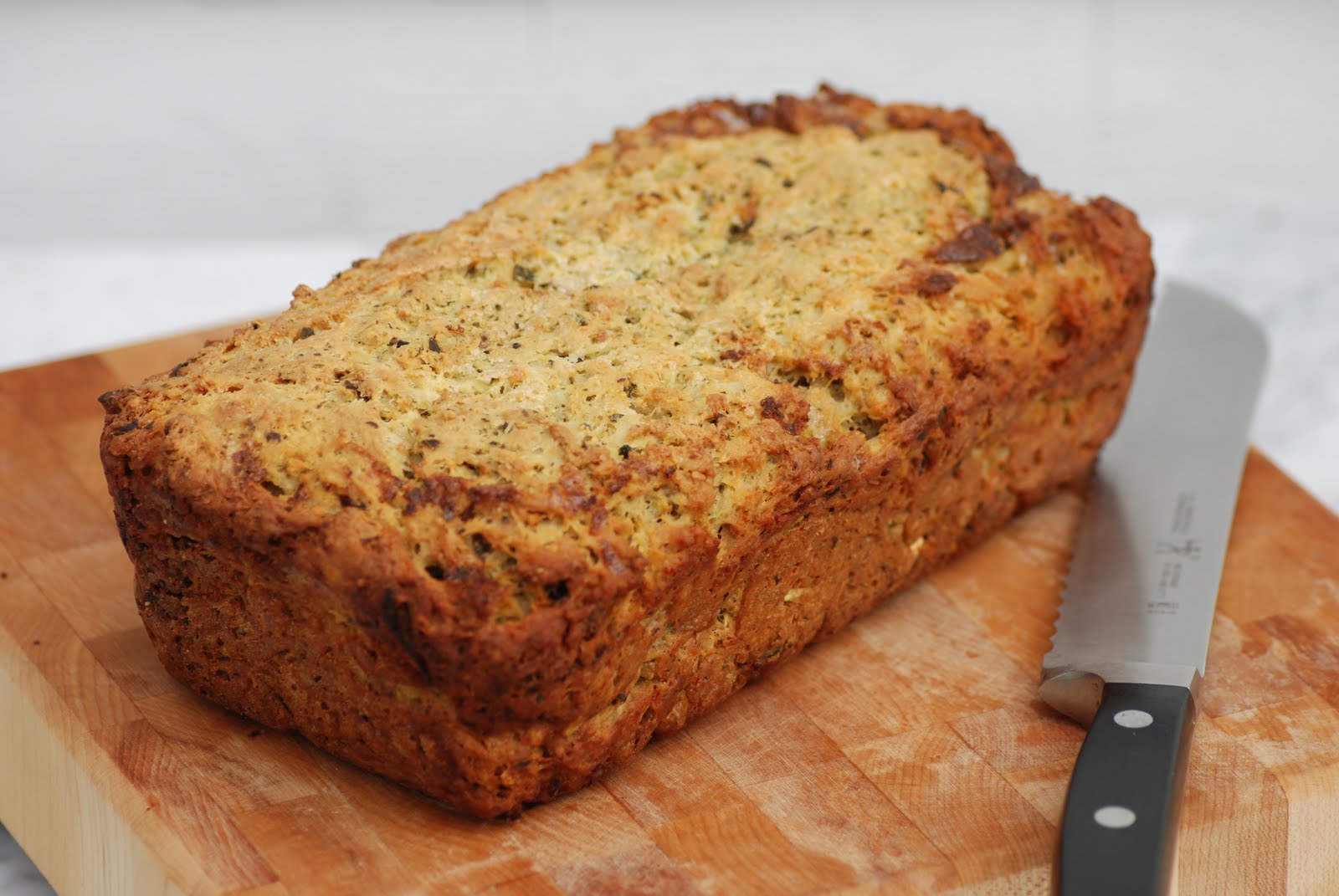 It’s difficult to determine whether or not this has been a successful summer for our zucchini plants. On the one hand, my early bug smooshing efforts paid off with a bounty of blossoms for stuffing and frying. On the other hand, the squash bug nymphs that emerged from the eggs that I missed appear to have won the battle for plant-dominating supremacy, and one by one, my squash – all types, in fact – are being cut down in their prime by those nymphs. This is the winter, I think, that I become well-versed in organic ointments for my garden, rather than continuing with the entirely holistic, companion-planting, bug-squashing, egg-destroying approach I’ve embraced thus far.

Still, we have more than enough zucchini for two people, and my secret zucchini plant – shhhh, don’t tell anyone, those horrendous nymphs and their friends the squash borers might hear you – is still producing in its clandestine location behind the asparagus patch, which is fortunate, because as soon as I tasted this zucchini bread, I wanted to make another. Just to be sure we had enough. There appears to be a trend here, first, the secret zucchini plant, then, a secret zucchini-pesto loaf. And a good thing that I made that second loaf, for the first was devoured in a mere three days. We had it with sliced tomatoes and fresh mozzarella that we had for dinner in the garden last night – it’s far too hot to cook dinner, yet, somehow, I found myself baking bread during our first-of-the-year heatwave – and also makes a mean grilled cheese and capicola sandwich. It is so good with summer snacks, in fact, that I might try zucchini-pesto crackers next. I’m making myself hungry just thinking about it, so without further ado, I present to you, a zucchini bread of the very highest order. 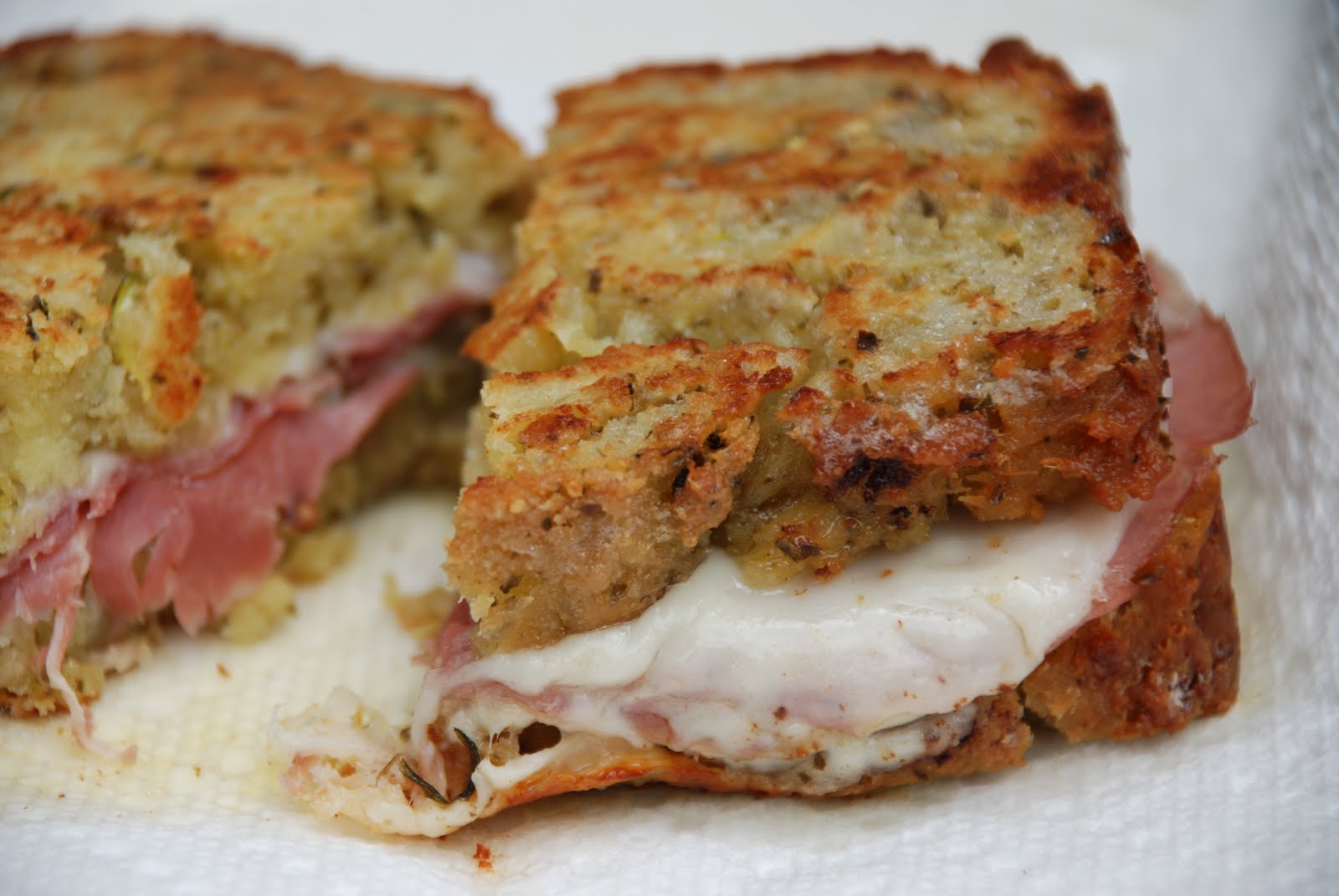 Estimated cost for the 12-slice-minimum loaf: $7.25. The eggs should be no more than 26-cents each. The ricotta costs $5.99 for 1 1/2 pounds, and we used about a third of that, so that’s $2.00. The pesto I used was made from basil grown here in my garden, but a 6.5 ounce jar of the Whole Foods 365 Everyday Value brand pesto costs $3.99, so using two-thirds of it runs us $2.66. The butter costs 70-cents for one stick, again using the Whole Foods 365 Everyday Value brand. The flour costs $4.49 for 19 cups, so our 3 cups cost us 71-cents. The baking powder costs a little less than 1-cent per teaspoon, so we’ll just go ahead and call 1 tablespoon 3-cents. The zucchini would be around 1/2 pound, and at $1.25 per pound (or free because you and/or your neighbors are actually overrun with zucchini), that adds 63-cents. As previously mentioned, you should get at least 12 slices from the loaf, and at that, the cost is 60-cents per slice. If you went ahead and made the grilled provolone and capicola, that would add, per sandwich, another 31-cents for the provolone, which costs $4.99/pound, and the capicola costs 35-cents at $5.59/pound. You’re using less than an ounce of each per sandwich, but we like to round up here, so round up we will. I’d figure on 2 additional tablespoons of butter for cooking the sandwiches, and that adds 18-cents for four. Your total sandwich meal cost for four, then, would be $7.62. Oh, and they are filling and delicious. Not too shabby for $1.91 per person, is it?

Dinner tonight: It’s still quite hot out, despite allegations that Hurricane Bill would cool things off a bit. We’ll have more tomatoes with fresh mozzarella and a couple slices of this zucchini bread again. Estimated cost for two: $9.45. The tomatoes are from the garden – or, more accurately, from the brown paper bag grouping on the top of our wood stove where the rescued-from-late-blight tomatoes live. If you were buying field tomatoes, you’d pay somewhere in the range of $2.75 to $3.25 per pound, so we’ll call it $3.25. The mozzarella was $8.99 for about 3/4 pound, and we’ll have half of that, so that’s $4.50. We’ll toss a few basil leaves from the garden over it and drizzle the plate with a tablespoon or so of fancy extra virgin olive oil (as compared with the everyday extra virgin olive oil I use), and we’ll add in another 50-cents for the oil. As you know, the bread costs 60-cents per slice, and we’ll each have one.

18 Comments to A Quick Bread of the Highest Order: Zucchini Pesto Bread