Oatmeal: As Obsession and Process

One thing that keeping a blog has made quite clear to me is that I am, by nature, obsessive.

I mean, I suppose there are worse things to be – and I’m not compulsive, which is a plus – but my food-focus comes in very intense stages. At this time last year, it was apple-cinnamon desserts. This was followed by all things egg. Then spring vegetables – primarily asparagus – then tomatoes, next pumpkin, and now, I must report, my new obsession is oatmeal.

With the change in seasons calling for me to ditch the raisin bran and move on to hot cereal each morning comes a new raison d’etre. Or raison de manger, in my case. It may seem odd to share a recipe for oatmeal – I mean, how many ways can there be to prepare oatmeal, right? But this is how ideas for new recipes come to me, so I figured I’d rope you into my madness, with the thought that once the more interesting recipe interpretation of my cool-weather breakfast obsession is worked out, you have an idea how I got there. 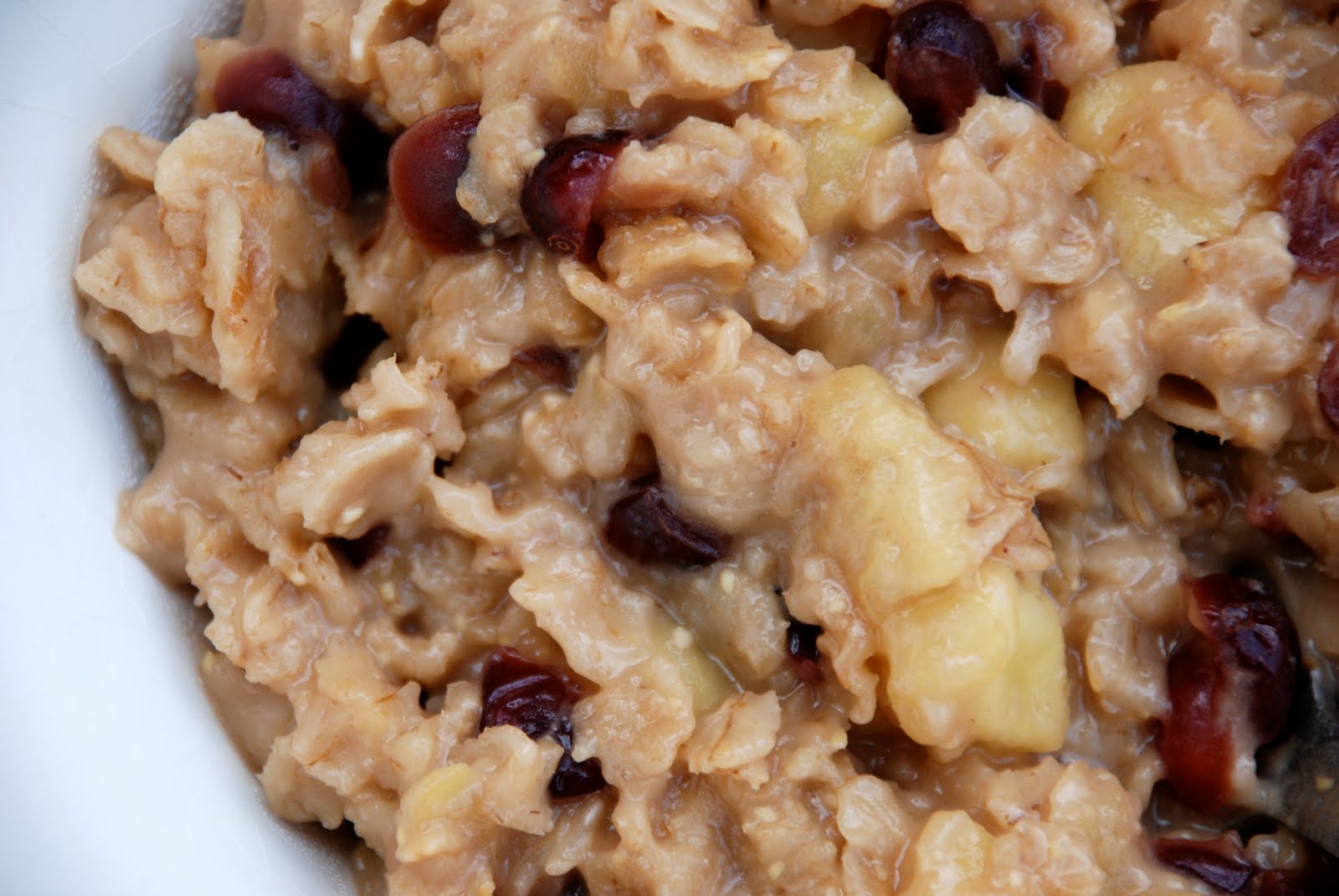 Print
Apple-Cranberry Oatmeal for One (One Hungry One, that is)

Oatmeal is, of course, a good budget breakfast option, and seeing as girlfriend over here has to get more fruit into her diet, inexpensive “not-so-perfect” apples from my neighbor’s trees and a handful of dried cranberries are definitely in order to help knock out at least one serving per day. Estimated cost for one heaping bowl of oatmeal (really, you could share this with someone, and if you have little children, this will definitely feed two wee people): $1.07. The milk costs $1.99 for 8 cups, so 1/2 cup runs us around 13-cents. The brown sugar costs 8-cents for two tablespoons. The oatmeal costs 31-cents for 1/2 cup. The apple was around 1/3 pound from a bag costing $2.50 for 6 pounds (not-so-perfect, and therefore discounted), which cost me around 14-cents, but if we went with the more widely available 99-cents per pound, we could round up and call that 35-cents. The dried cranberries cost around 20-cents for two tablespoons.

Dinner tonight: I am experimenting with my concurrent obsession, pumpkin, in fresh pasta. My last batch was sans egg, and it produced a lovely, delicate dough with the consistency of silk, but its gauzy nature proved to be a bit of a hindrance in cooking, as it didn’t keep separated well enough as wide noodles, it didn’t like being picked up with a pasta fork either, and therefore many of the noodles tore slightly on their trip from pot to plate. In the next batch, I made farfalle of it (rather fun to make those bow-tie pasta pieces by hand, might I add), and it fared slightly better, but I’m thinking it needs some glue in the form of egg to really do it justice. So, tonight we will have Fresh Pumpkin Pasta with Brown Butter Cinnamon Sauce. Estimated cost for two: $2.13. The pumpkin costs 75-cents or so per cup for fresh puree. I will use 3/4 cups, so 56-cents, one egg at 26-cents, and $1.30 in flour, plus a tablespoon of olive oil, so 12-cents for that. This will yield enough for about 6 servings, but we could be quite hungry tonight (seeing as someone might have thought that oatmeal for breakfast was filling enough for her to skip lunch – never a good idea, plus, how will I ever get my recommended fruit and veggie servings per day skipping meals?), so we’ll call it four servings, and the pasta then costs $1.12. The butter is 70-cents, the shallot is 25-cents, and the cinnamon will be around 6-cents.

6 Comments to Oatmeal: As Obsession and Process