A Favorite Holiday Cake: Apple-Cinnamon Cake for Hoarding or Giving 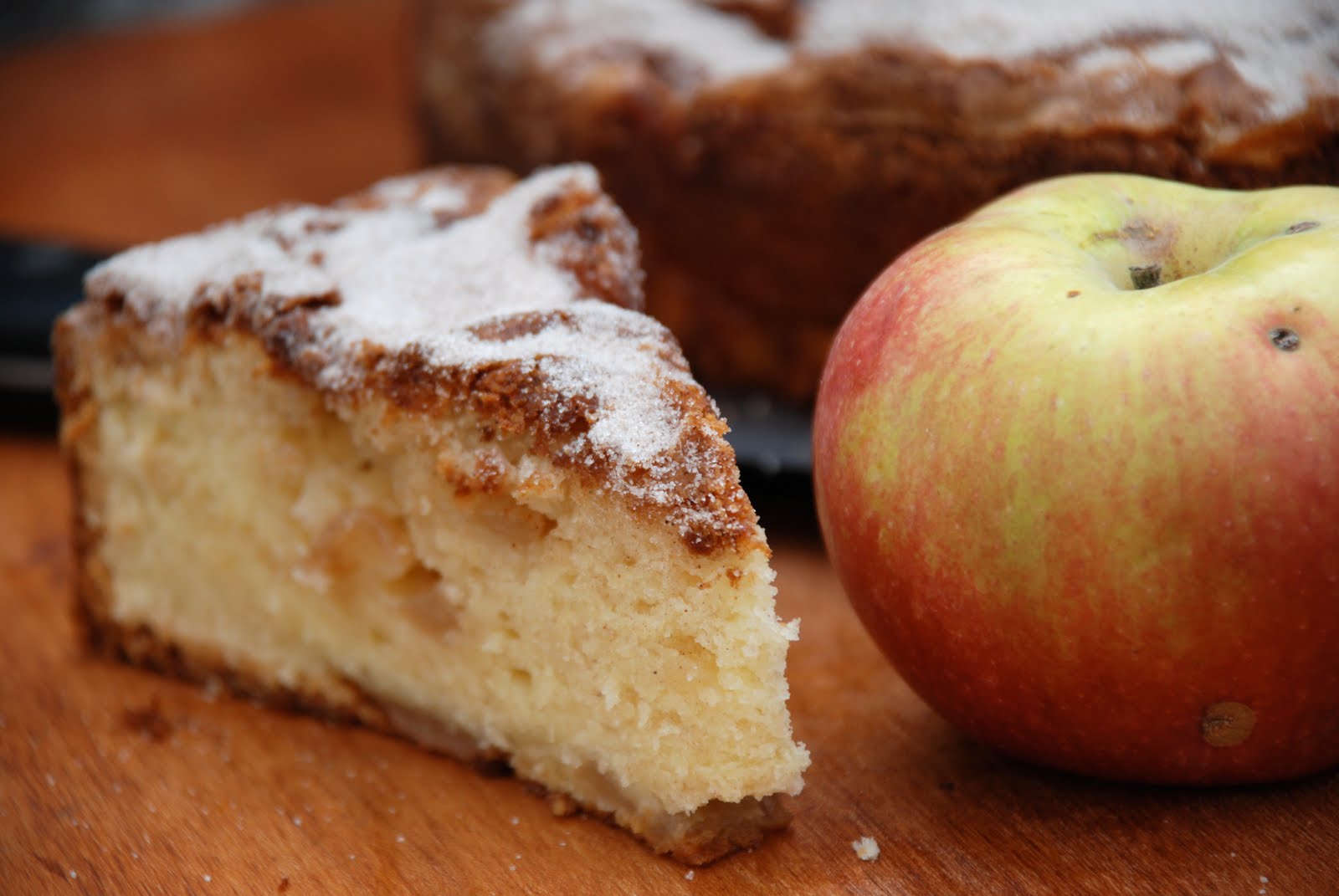 That’s one ugly, not-so-perfect apple, and yet, this is one mighty fine cake.

I feel a sense of comfort writing this post. Not like I’m wearing a favorite pair of jeans, for my hips and inherited semi-pro-football-playing-dad’s thighs have never quite been at their most comfortable in jeans, but as though a favorite friend, long missed, has come for a visit.

This apple cake has served me well, and it has done so for nearly a decade. Last year, family and friends received this cake for their holiday gifts, a substitution, and better one, at that, for our normally purchased presents. For though its enjoyment is fleeting (it hasn’t lasted long in any of the households I’ve sent it off to), the memory stays with you, and its memory is better than nearly any mall-bought gift of which I can conceive. 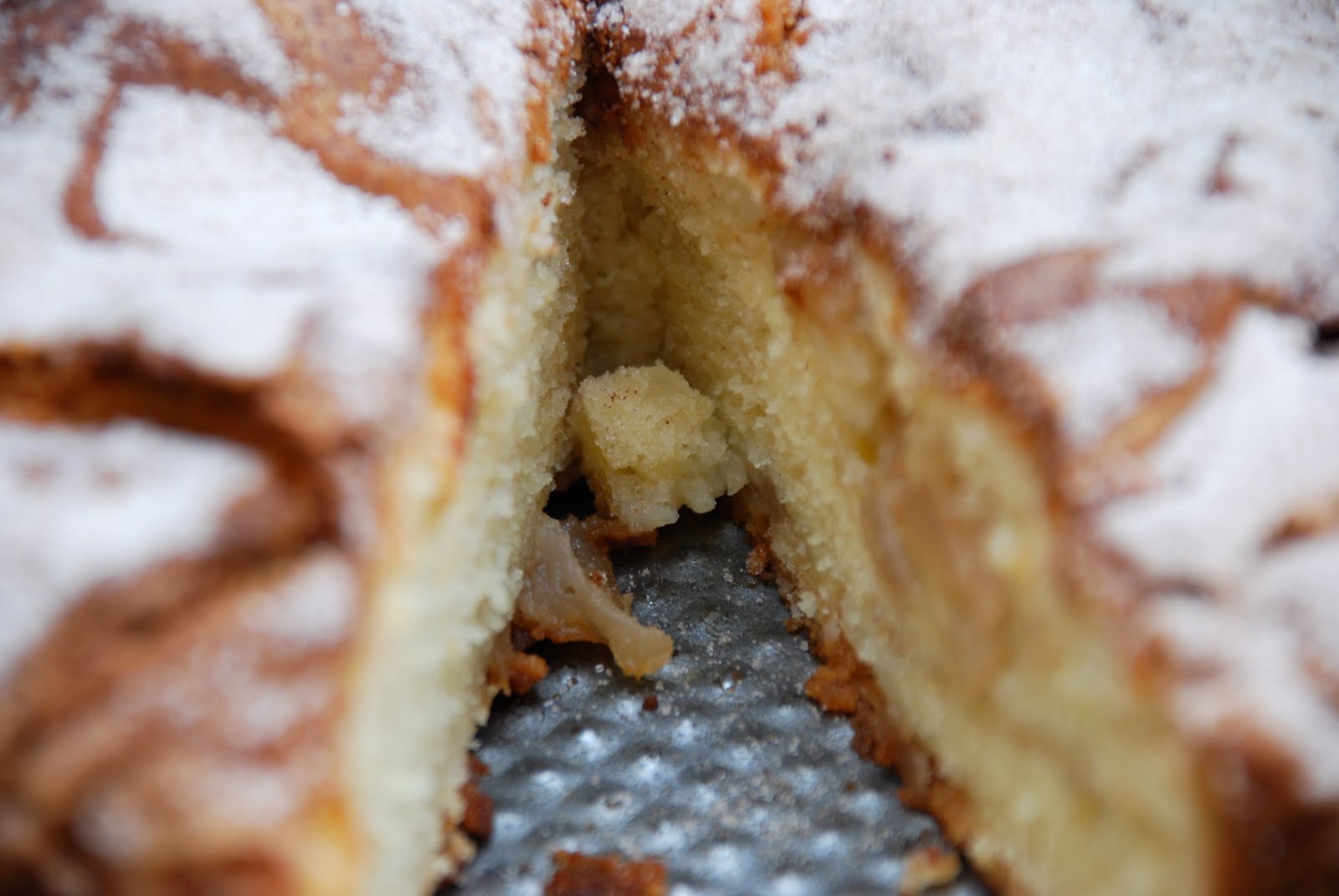 Aside from being well-received as a poor girl’s holiday offering, it has also served as a learning tool; this recipe has provided a foundation for the creation of other cakes. Its ratios – embedded forever in my brain, having cooked scores of this cake over the years – have helped me craft all manner of baked treats, varying from season to season. From blueberry cake during the summer, to ricotta-apple cake, or pumpkin coffee cake in the fall, a little tweaking of the moist ingredients, seasonings, and toppings gets me where I want to be, depending upon what’s available at the farm stand.

In that way, it really is like a good, old friend, kindly introducing me to her inner circle – produce-based though they are (I’m all about assigning anthropomorphic qualities to favorite foods, so there we are with that) – not minding if I choose one of them over her from time to time, for she knows I will always return, and when I do, I’ll appreciate her charms even more. 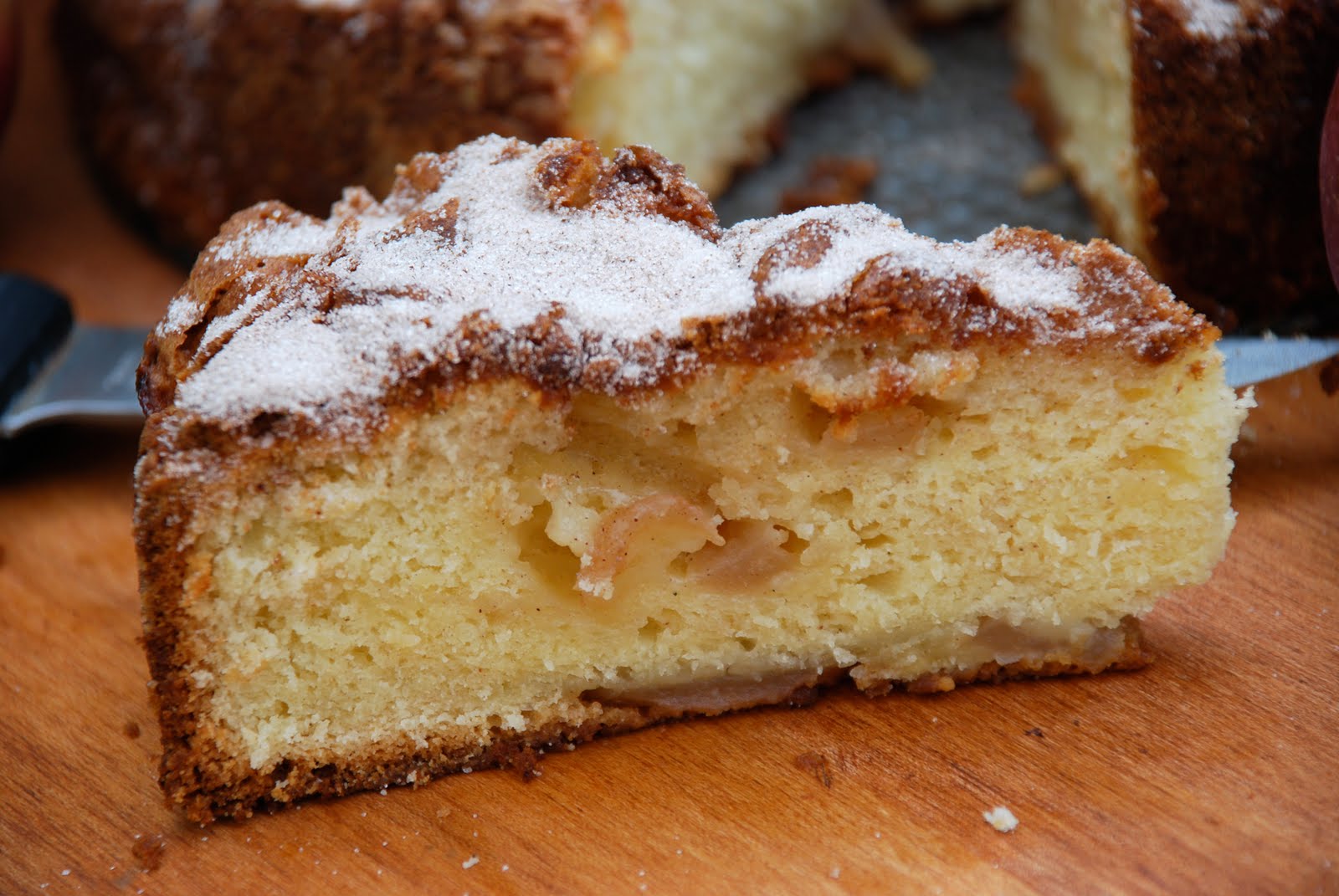 See? It’s like the cake is smiling at us. Charming, for sure.

I hope you’ll give this cake a try – perhaps bring it with you to your holiday brunch, or serve it with vanilla ice cream after the prime rib roast and potatoes have had an hour or two to digest. Appropriate for breakfast, dessert, or gifting, this is my favorite holiday – and everyday – cake. 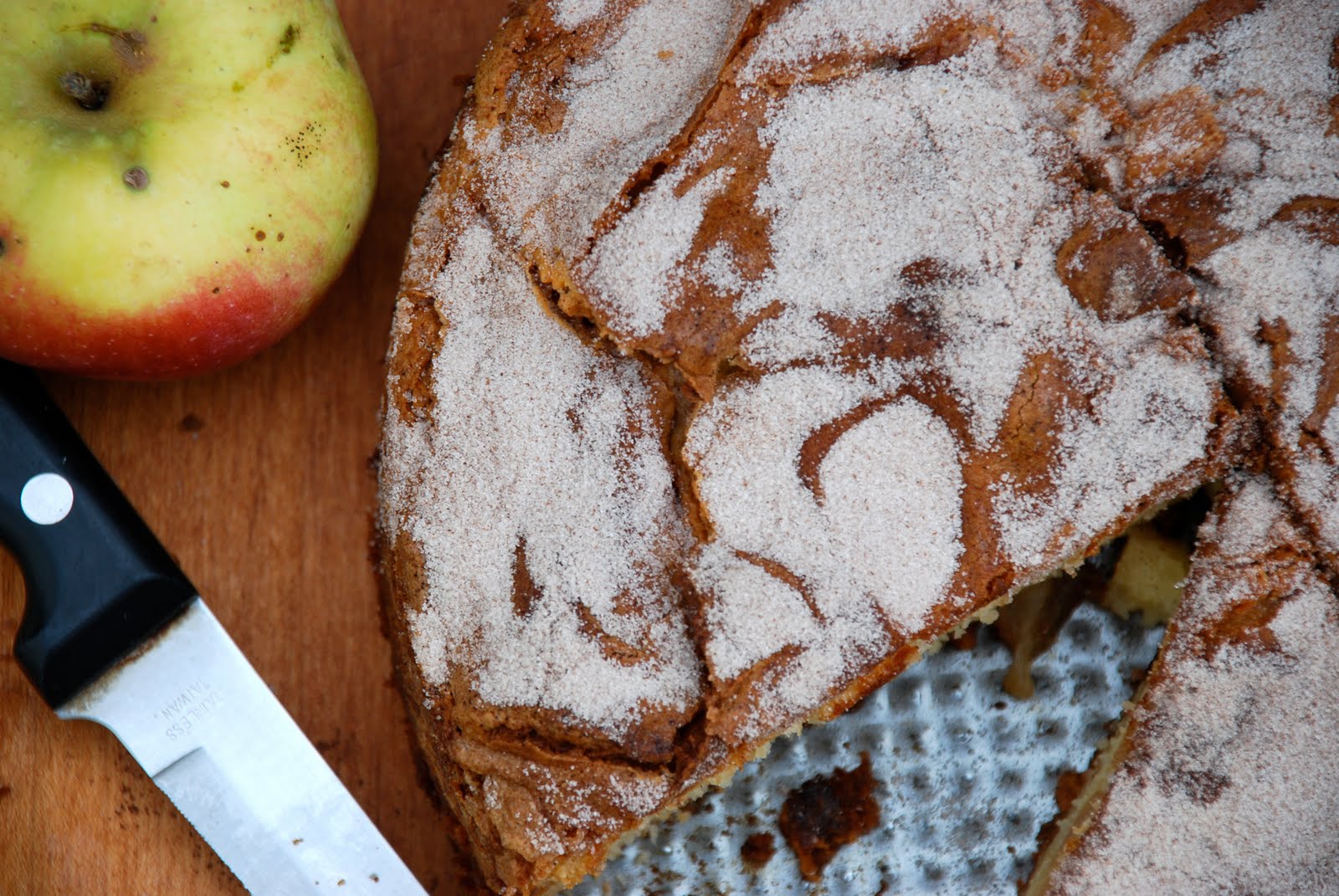 Estimated cost for one cake (but don’t tell the gift recipient this part, okay?): $5.77. The cinnamon costs around 11-cents per teaspoon, so our tablespoon is 33-cents. The granulated sugar for the entire cake costs 32-cents ($3.49 for 19 cups). The apples should be no more than 99-cents per pound, and they will weigh somewhere in the range of 1 1/4 pounds, so that’s $1.25. The butter costs 70-cents, as it is one stick of four from the Whole Foods 365 Everyday Value brand butter that costs $2.79. The cream cheese is on sale at this time of year, and you should be able to get it for close to one dollar, but in case you aren’t able to, we’ll call it $2.00, as it commonly sells for that as its regular price. The eggs should cost no more than 26-cents each, and the vanilla extract should run you around 22-cents. The flour costs 41-cents, the baking powder is around 2-cents, and the salt, we don’t count in our estimated tally math.

For gift-giving, I bake these in bakery-style paper pans that I buy from King Arthur Flour, and the tree-shaped paper pan makes a nice holiday presentation. Just be sure to place the paper pan on a large baking sheet (10 by 15-inch rimmed is a good bet) before filling it with the batter lest it have the opportunity to splatter on the floor for lack of support. If you choose to bake in one of these paper pans, be sure to cool the finished cake sans baking sheet on a cooling rack before packaging it up for gifting, as it will become soggy on the bottom if left to cool on the baking sheet (pesky condensation!). The paper pans cost $4.98 (plus shipping) for four, keeping our cake in the fiscally responsible category, unless, of course, you opt for overnight shipping. This is why I’m sharing this recipe now, so that we can all plan ahead.

pssst: I’ve submitted this cake into the Bon Appetit “Blog Envy” contest. If you feel so inclined, please head on over there and vote. Much appreciated!

Dinner tonight: Last of the Slow-Roasted Tomatoes with Rigatoni and Cream. Estimated cost for two: $5.81. Those green tomatoes I purchased for $1.00 per pound at my favorite farm stand back in October had all ripened by the time JR and I returned from Thanksgiving in Vermont, and so, on Sunday, I roasted the last of them. I wish I had some black olives in the house, or at least the ambition to go buy black olives, for then I would forgo the cream, but, alas, I do not, and so we will have some cream-sauced slow-roasted tomatoes. The tomatoes were around 1-pound, so that’s $1.00. The oil for roasting was a few tablespoons, so around 36-cents, we don’t count salt and pepper in our math, and the oregano was from one of the many volunteer plants still growing in the garden (In December. In New England.), so it was free for me. However, were you to purchase fresh oregano, you would use around a quarter of a package costing $1.99, so that’s 50-cents. The rigatoni costs no more than $1.99 (I paid a dollar, actually, in one of those ten-for-$10 schemes), the oil for the sauce is around 36-cents, the shallot would be around 25-cents, and the cream is a half of a pint (leftover from holiday cooking) that cost $2.69, so that’s $1.35. 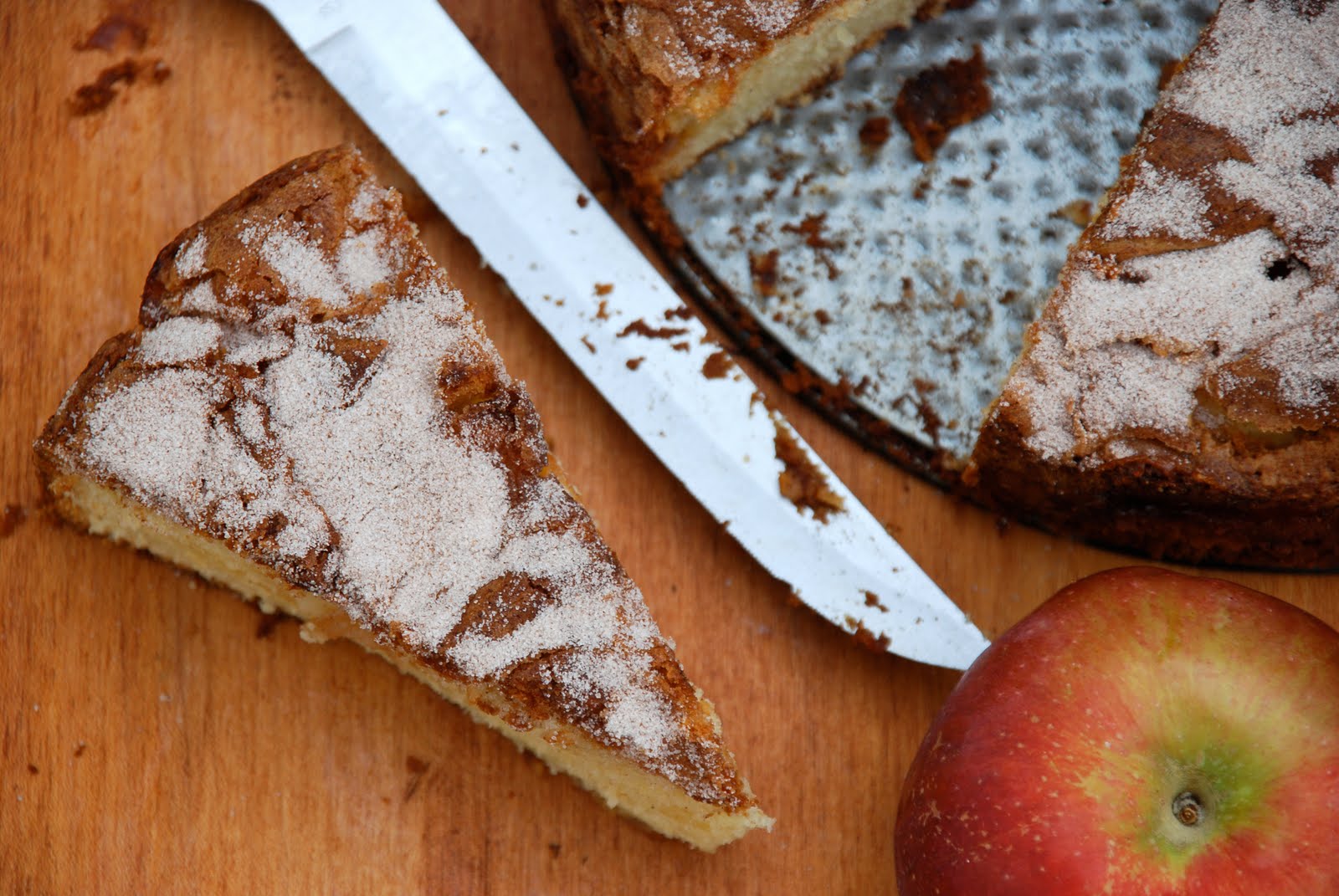 I had to end this post with one last photo, I love this cake that much, I just couldn’t stand to edit this picture out.

19 Comments to A Favorite Holiday Cake: Apple-Cinnamon Cake for Hoarding or Giving