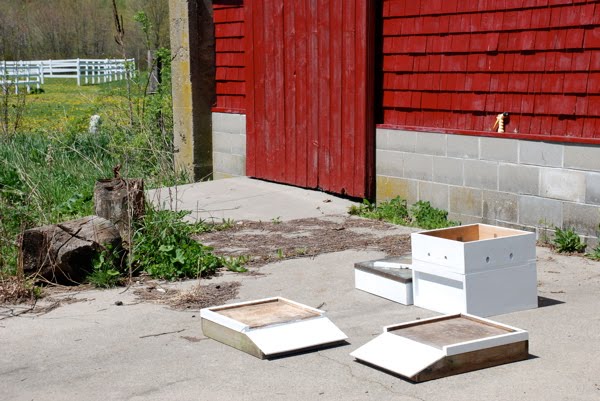 A pictorial essay with the occasional quip, of course. Those are the hives disassembled in front of our barn (pre-spring cleaning of the yard by the beekeeper – he works his butt off, that beekeeper does). You remember from Monday’s post what a box of bees looks like pre-hive, of course, but I’ll remind you here: 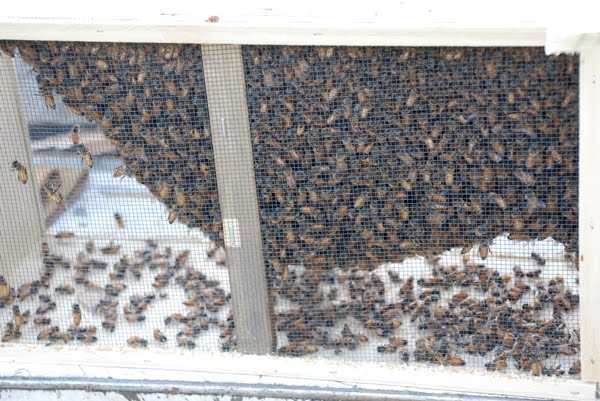 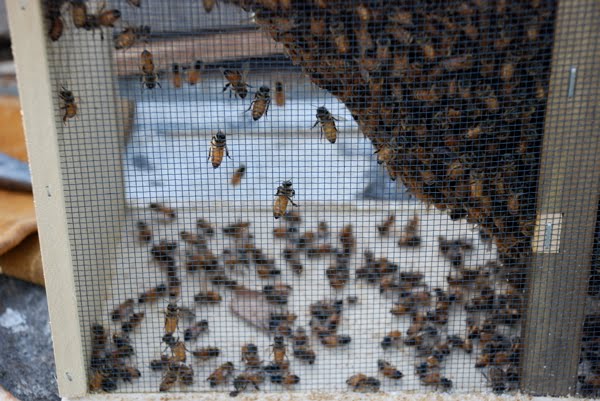 Once the box is safely placed on the tailgate of the beekeeper’s work truck, the beekeeper dons his safety gear. We aren’t quite at the “toss the bees in the hive while barefoot, shirtless, and in shorts” point just yet (by “we”, I mean “JR” – shirtless is not a good look for me). Here, JR is sans gloves, but, believe me you, those are coming soon.

Each box comes with a wooden door of sorts – stapled into the top of the box to be sure that the actual bee doorways are sealed. 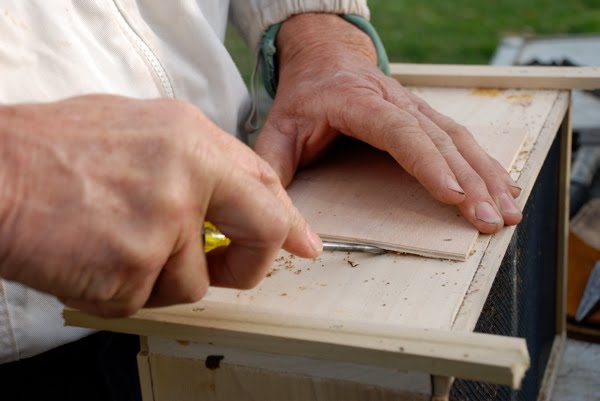 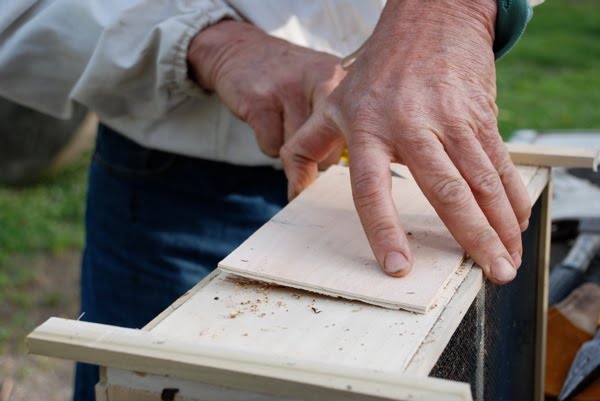 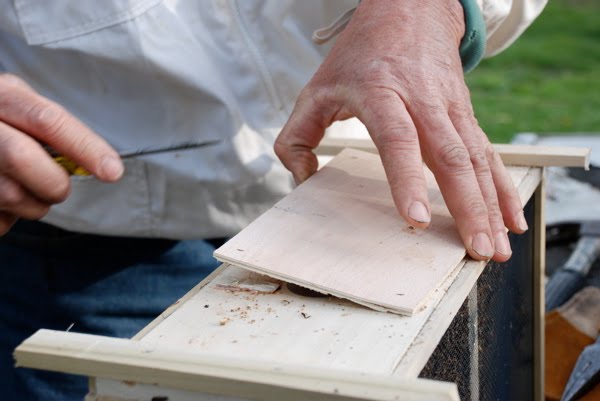 I use the term “bee doorway” loosely. The large can is full of bee food – sugar syrup – for the bees’ travel up the east coast from Georgia to their New England destination. Once that can is removed, the bees are as free as can be (I absolutely could not resist. Sorry.).

The smaller circle is the queen cage – that’s right, queenie lives in her own little cage, sequestered away from the worker bees, though she has three or four attendant bees hanging out with her in the wee cage. 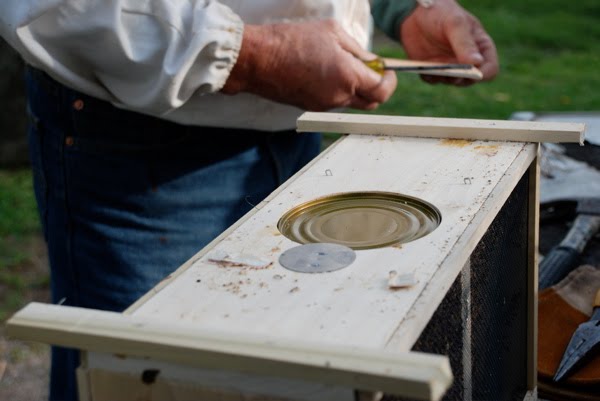 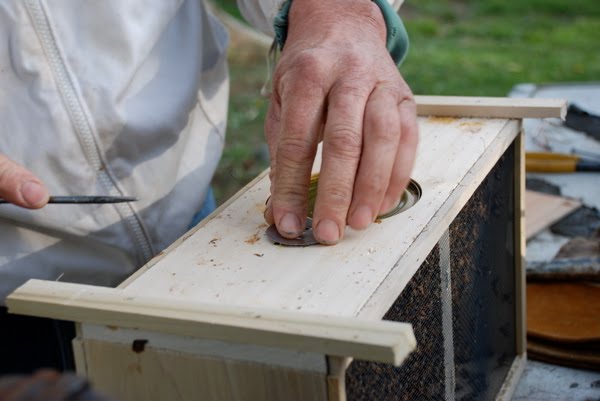 So here comes the queen cage (and please notice that the gloves are now on): 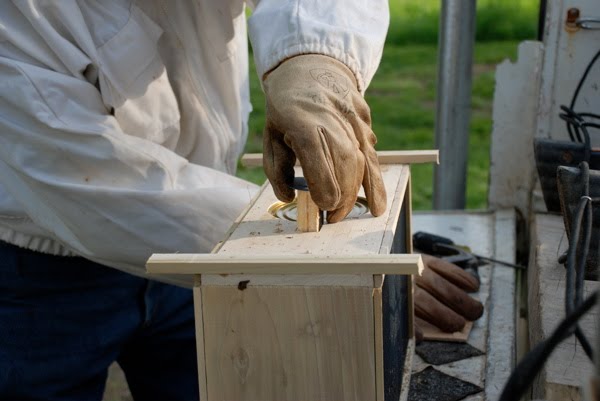 Whew! Only one loose bee. On the top of the queen cage, underneath the metal cap, is a little hole that’s sealed with sugar. Once the queen and her attendants chow through the sugar, that hole becomes her exit from the cage. 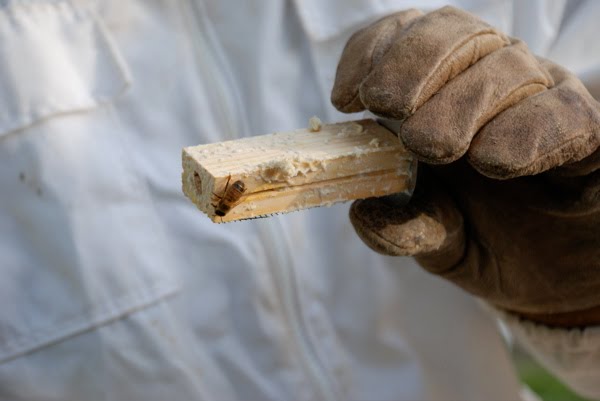 Um, yeah. The rest of the colony does not like being without their queen. It’s a pheromone thing. 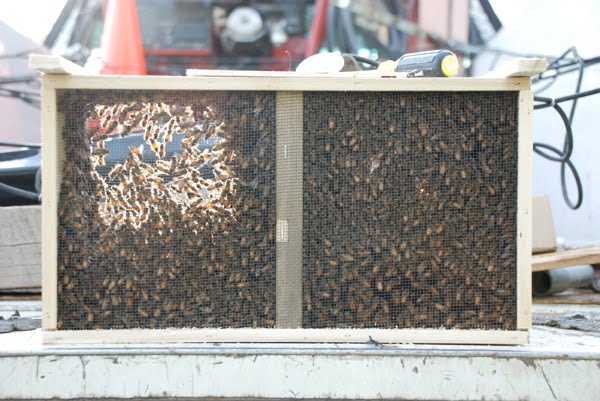 Next, the beekeeper sets the queen cage into the hive, resting upon frames of wax honeycomb foundation (if you need to order it, it’s called “foundation”. The wooden frames allow the beekeeper to easily remove a frame or two and check on the colony’s health – essentially to see whether the queen is producing eggs, and, in the honey super (the box or boxes on the hive designated for honey, not bee larvae), the frames allow the beekeeper to easily remove the frames of honeycomb for honey extraction. 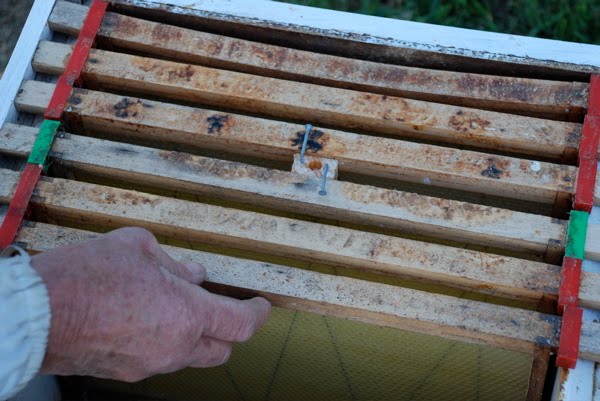 Typically, the queen cage has wooden strapping on it to allow the beekeeper to easily rest it atop the frames. Not in this case, however. JR sent me off to the barn to get nails, which he then bent in the vice attached to his work truck and very gently pounded into the top of the box to fashion queen cage hooks. 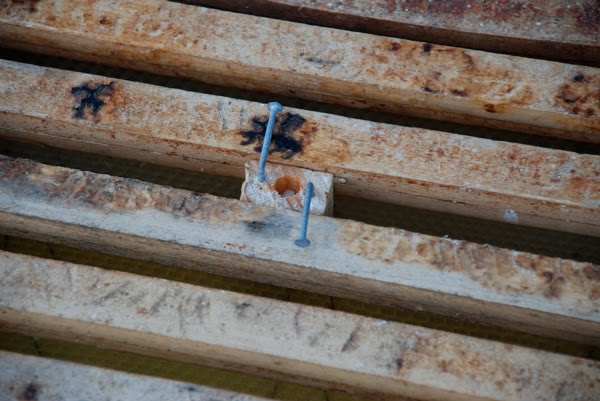 Now, for the real business of hiving bees. Out comes the sugar syrup container. 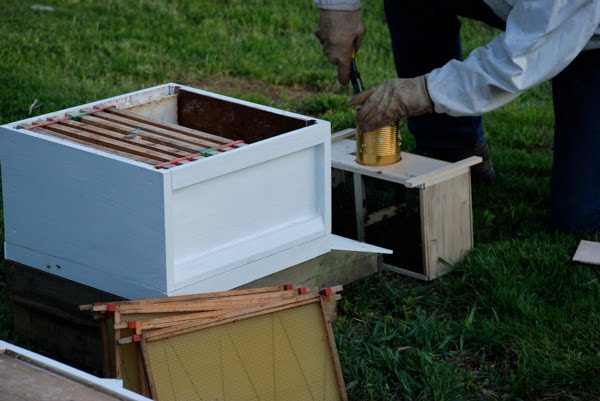 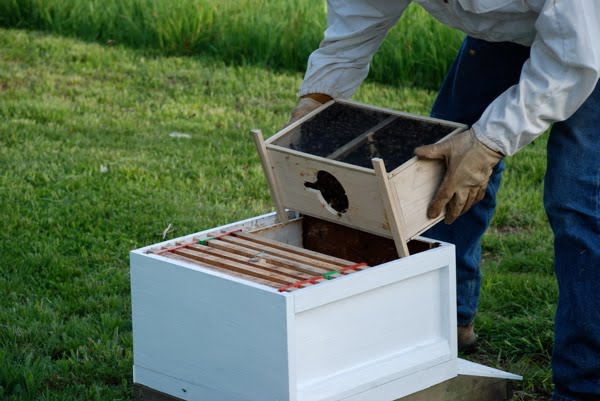 Out come the bees. 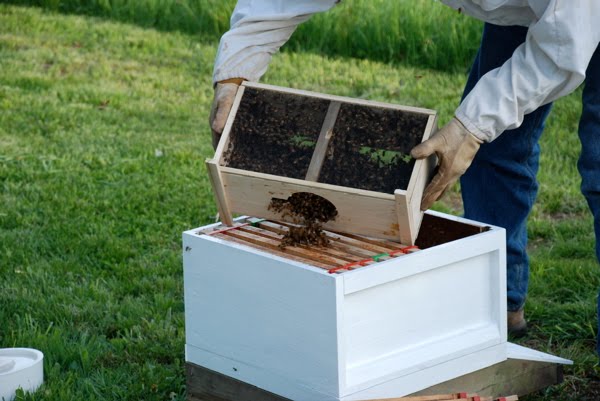 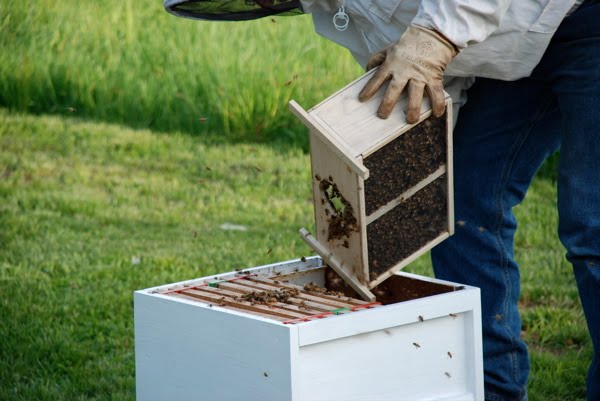 And, yeah, you just whack the box if they don’t come out after a few shakes. 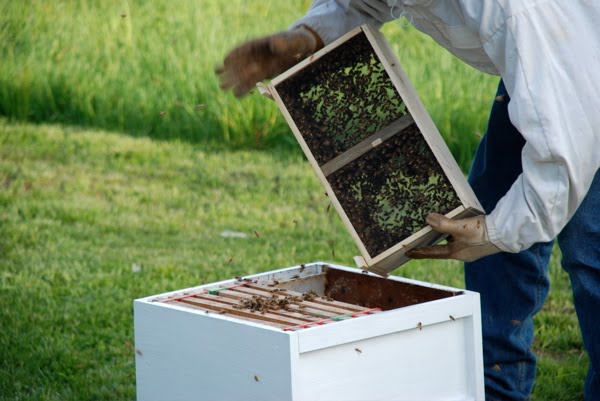 Oh, sure…just stick your hand in there now. That seems like a good idea. 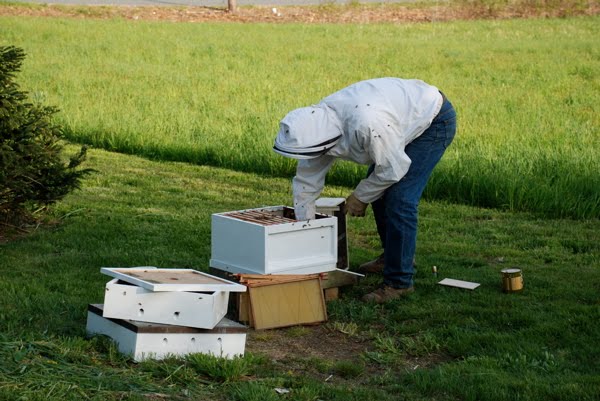 In JR’s hands is the wax foundation in the wooden frames I was telling you about. You have to fill the hive with it to give enough room for laying eggs now that the bees are in. Or kind of in.

(in the picture above, he’s actually leveling off the bees so that he doesn’t smoosh them when he places the remaining foundation into the hive, so really it is a good idea to stick his hand into the hive.) 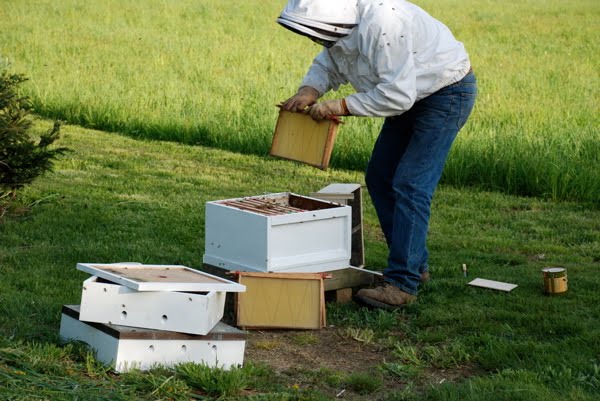 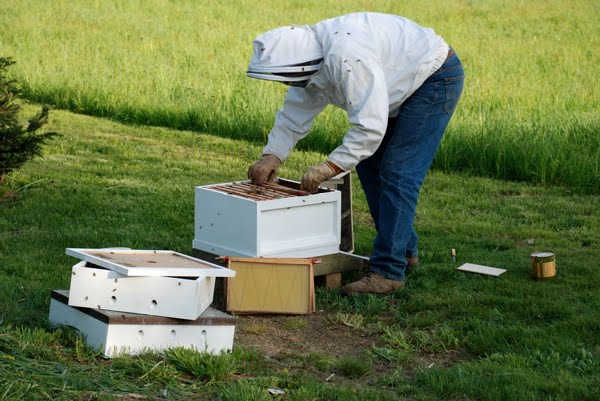 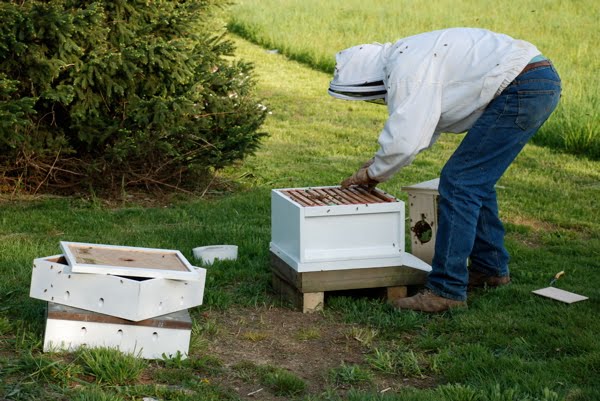 Now, just put the cover on and get ready to place your own sugar syrup feeder into the hive. 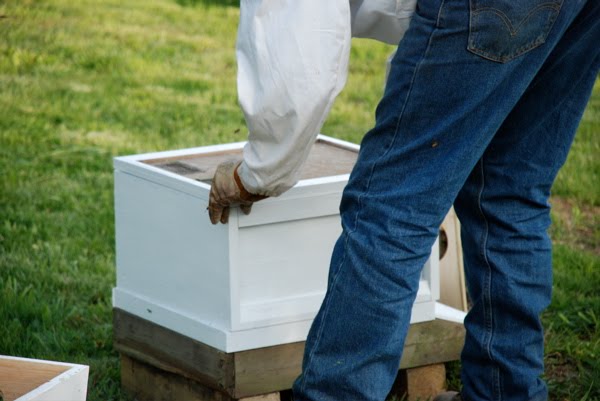 That white circular thing is the feeder. The bees climb up into a cup in the center that prevents them from drowning in sugar syrup – something like a bee feeding trough. This is a temporary arrangement until the bees have stored enough honey for their own food, which, of course, requires a flower or two thousand to be in bloom. 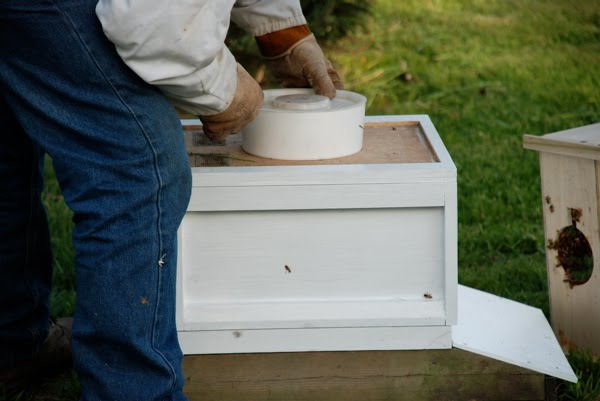 The bee box – with all of the bees that had avoided being dumped into the hive on the first few shakes – remains next to the hive entrance so that they are attracted by the queen’s pheromones and find their way into the hive eventually. Hives Two and Three had quite a bit fewer bees left behind in the box during their installations, and in the end, all of the bees made it into their respective hives. 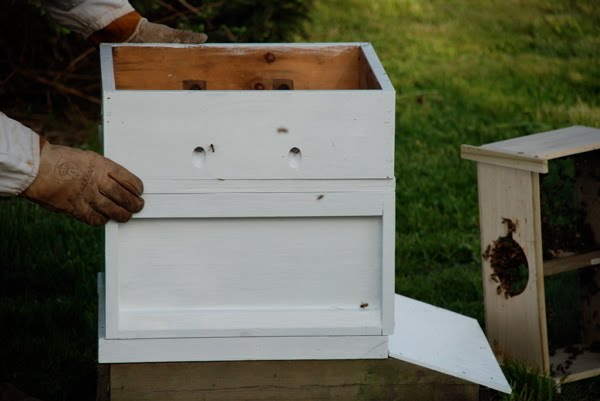 And those hives look like this, cobblestone and all: 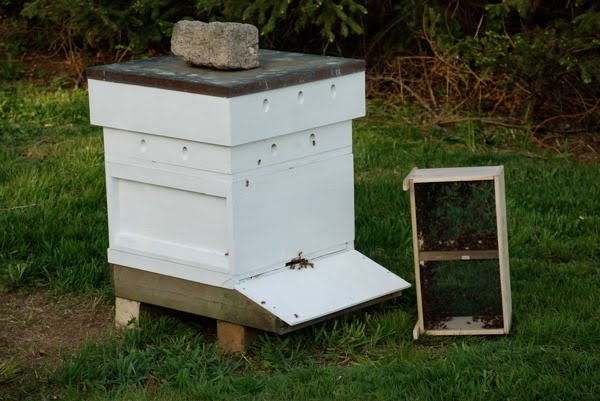