July Book Events and an Update on Bees 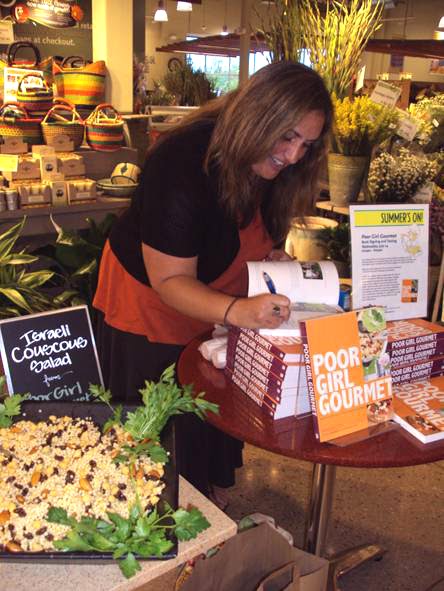 WFM photos are courtesy of Lauren & Nate at WFM Dedham

Every single book signing and book event I’ve been to has been a blast. I’ve met so many interesting people who want to talk about food (I’ve dreamed of this day for so, so long. People. People who love food and don’t look at me cross-eyed when I start wistfully describing the flavor of a homemade pesto or grilled corn on the cob. I love these people.), some of whom even buy my book.

At the Slow Food Boston/Public Radio Kitchen “Slow Food on No Dough” event at the end of June, I was finally able to meet Anastacia Marx de Salcedo of Slow Food Boston and Public Radio Kitchen after more than a year of emailing back and forth. Along with Anastacia, I also got my first in-person introduction to Sue McCrory (we share a lot of farm and garden experience in common, which is always amusing to recount while hanging out on Commonwealth Ave in Boston), and Brian Knowles, The Gringo Chapin, my until-this-point Twitter-friend not in-person friend (we’re now in-person friends, of course).

It was also wonderful to see Jessica Alpert of Radio Boston and Public Radio Kitchen again. Earlier in June, we had set out with Radio Boston host Meghna Chakrabarti to shop and cook on a budget, the results of which can be heard here. Boy, do I love me some radio, let me tell you, and Meghna, Jessica, Meghan, and Tim were wonderful to work with, even if with my trademark longwindedness (another made-up word. I’m on a roll these last few posts) I managed to keep them at work until 8pm.

The Slow Food/PRK event was a pot luck, with everyone in attendance making their best on-a-budget dishes; all of which were delicious, and quite healthy (for they were comprised primarily of vegetables and legumes, not surprisingly). After dinner, I launched into the story of how the book came to be, but not before (as Anastacia puts it so amusingly in her event recap) lobbing plants and seeds at the crowd.

I’m a semi-violent grow-your-own advocate, it turns out. Beware the mad seed-lobber woman, for she will force you into growing one thing yourself. Just one thing, for crying out loud.

There was far less flinging of plants and the like at the Whole Foods Market in Dedham this past Wednesday, where the prepared foods team was kind enough to make a huge amount of my Israeli Couscous with Chickpeas and Almonds (a summertime favorite, and quite likely to be on the menu at a few of my upcoming events, as it’s a good vegan option – unless, of course, you’re allergic to nuts. Or don’t eat gluten. Then it’s not such a great option after all.), and Lauren, the Marketing Team Leader in the amazingly gorgeous and somewhat overwhelming (in a good way) Dedham store stood by my side all evening, talking up the book and doling out heaping portions of couscous while I chatted up a storm with many of my old friends, and then proceeded to lose myself in the wine department (you should see the wine they have there. Holy cow. And cheap, too!) before taking my leave of the store. Oh, but I will be back.Yes, I will. And when I am, I will spend four, maybe five, hours perusing the merchandise. 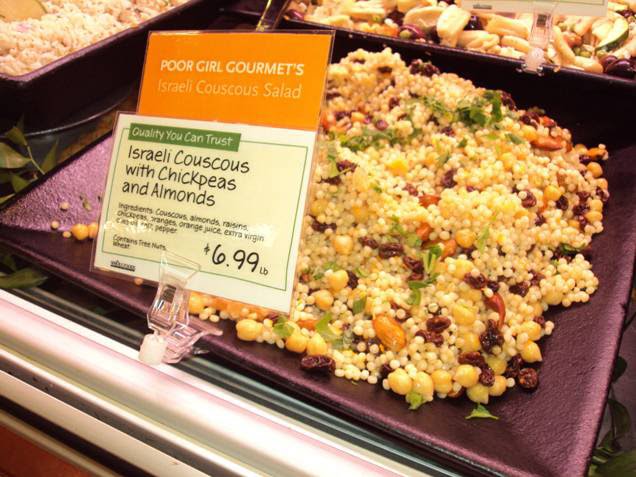 as someone at WFM was heard to remark, “for those who are less frugal-minded and more convenience-minded” – Israeli couscous already made for you.

On Monday, July 19, I’ll be at Harvard Bookstore in Cambridge. I start speaking at 7pm (or so), and there might be a plant or two lurking behind the podium (or chair. In the event that the event is podiumless. Please do give me credit for yet another imaginary word, if you don’t mind.). I may not hurl plants at people, though. If I’m in a pleasant enough mood, that is. 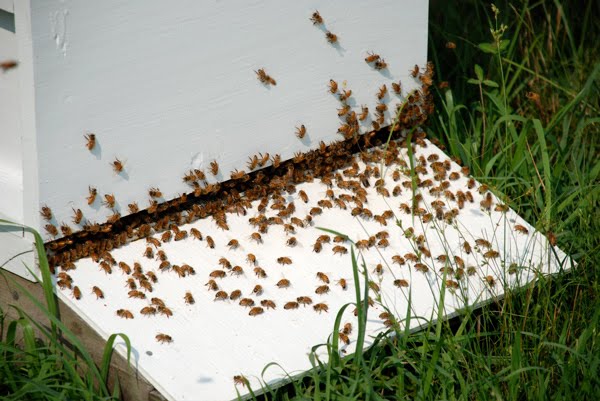 While I’m on this whole update kick, I thought I might let you know how things stand with our bees. All I can say is Holy Healthy Hives. Try saying that ten times fast, okay?

Last weekend, in response to the increasing crowds of bees on the front and sides of the exterior of the hives (the number of bees clustered outside one of the hives had me convinced that it was soon to swarm. Not so. There I am, once again, with the worry for nothing.), JR went into the hives, chiseled away the propolis with which the bees were covering their ventilation holes (yeah, they hadn’t received the memo that those holes were wanted), and added honey supers.

Honey supers are the boxes with wax honeycomb base in which the bees will eventually build up natural comb where they will store honey and honey only, rather than honey and brood (or we could call it bee larvae, but brood sounds nicer, don’t you think?).

As of today, we’re thinking we need to add another honey super to each hive, and soon. These hives are strong. If all goes well, I may be calling upon you to buy honey from us this fall – we could end up with 50 pounds per hive, and with three hives, well, I guess if we had absolutely no money to spend on food from other sources, we could eat 150 pounds of honey over the winter, but I suspect we’d eventually feel pretty ill. And exhausted of the taste of honey. If one can even imagine that. 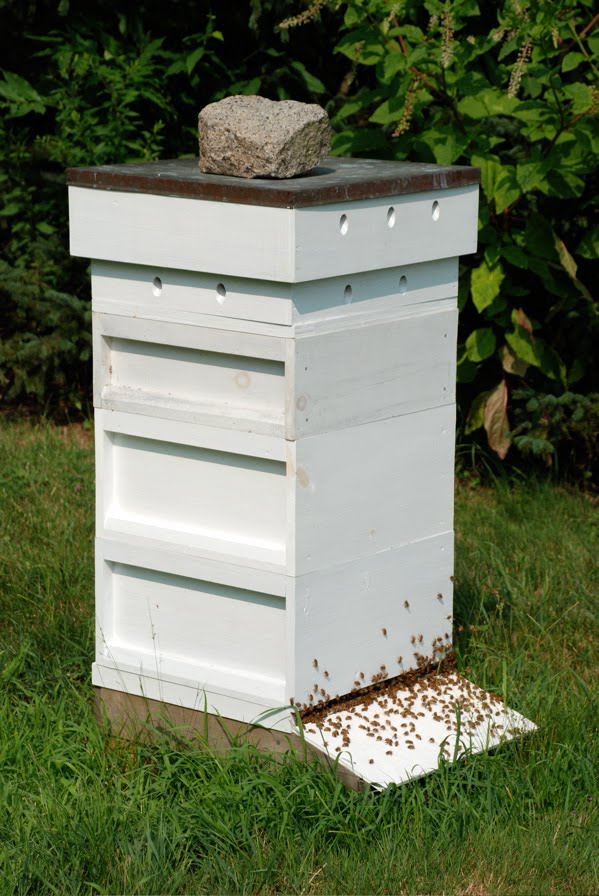 Dinner tonight: Who can even think of such a thing while it’s so darned hot out? Well, if pressed to decide, I’d say we’re going to have the other half of the pizza dough from the batch made earlier in the week, topped with some grilled corn (which was grilled smack dab in the middle of the afternoon while it was a mere 95 degrees out, all in the name of getting a good shot of it for an upcoming blog post), sliced tomato from the garden, fresh mozzarella, and a bit of pesto, made with basil from the garden. Estimated cost for two: $5.33 if we somehow manage to have the strength to eat an entire pizza, that is. The dough costs 54-cents. The corn will be from one ear of corn that costs 55-cents. The tomato is free, but in the interest of pricing this out so that even those who fear not the seed-slinging grow-your-own madwoman may feel that they are being frugal when they make this pizza, let’s just say the tomato weighs 1/2 pound, and you bought it at the farmers market where they charge $3.25 per pound. That’s going to cost us something like $1.63. The mozzarella was $3.99 for 8 ounces, and we’ll use just half of that because it’s awfully hot out, and who even has an appetite to eat more than a couple ounces of cheese on a night like tonight? The pesto will be just a drizzle of homemade, figuring that homemade costs around $4.68 for one cup (with purchased basil), so I’ll figure on two tablespoons (to be generous), and that quantity therefore costs us around 59-cents. I’ll also coat the pizza dough with a tablespoon of olive oil before layering the veggies and cheese on top, so that adds 12 more cents to the tally. Provided, that is, that I’m able to lift the bottle of oil at all, given the heat exhaustion from which I am clearly suffering.

2 Comments to July Book Events and an Update on Bees