This Week in the Garden: Early August 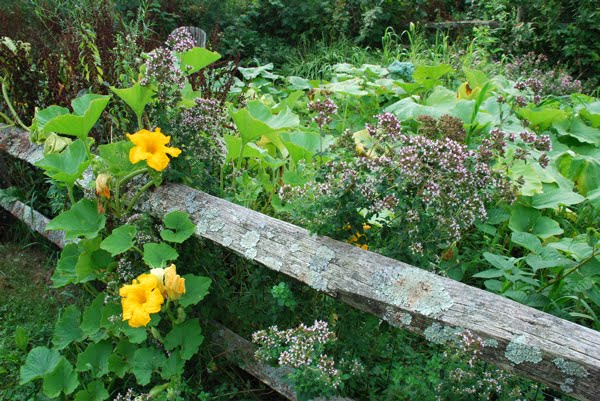 Our garden is, as JR likes to put it, in its late stages. This is a kind way to say that it’s a mess, as you can see above here, a plethora of weeds, oregano going – very undesirably – to seed (I’m fairly certain that if all else fails, I could open an Oreganoeria – if that’s how a word indicating “the making of” such as “gelateria” would translate to oregano – with absolutely no initial investment costs. This morning, while cutting oregano for drying, I couldn’t help but wonder if there is enough worldwide demand for oregano to even make a dent in the crop volunteering in our garden), and the winter squashes planted enthusiastically, yet in a slightly crowded fashion during May have not even bothered to ask whether it’s okay with us that they grow over and out of the garden fence into the lawn.

My obsession with squash has rendered the late-stage garden a jumble of vines, which I rather enjoy, as I like a mess, it turns out. The riot of squash flowers is serving well the bees in our neighborhood – both those from our hives and visiting bumblebees. 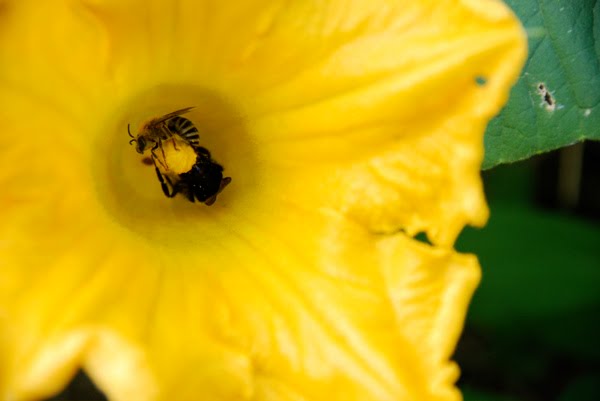 Even with a late-stage garden, it seems a bit early to be thinking of winter squash, but our first Potimarron squash, a French heirloom variety said to taste like chestnuts (I will be highly disappointed if this isn’t the case. I want me some chestnut-flavored squash soup this fall. Without doing the obvious adding of chestnuts.), was ready for harvest this weekend, its bumpy autumnal-hued skin concealed while on the vine, as only the smooth, bright orange skin could be seen while nestled between its bed of hay and overhanging squash leaves.

(All of our winter squash have beds of hay – seeing the plants take over the garden, only to have our first squash rot in the dirt was all the motivation necessary to provide each its own hay crib). 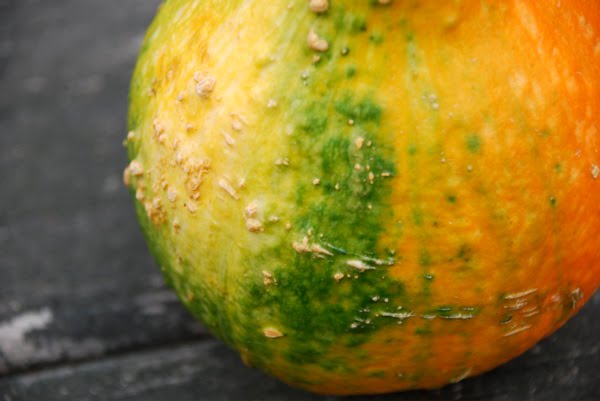 I’m figuring that I’ll have countless bales of dried oregano by the time the first frost is upon us. These flowers are from the very first bunch – or, I suppose we could call it a bouquet – of oregano harvested here this year. The bees weren’t terribly happy to be robbed of their oregano flowers, but with just a little flying around, they’ll be able to find another 18 or so oregano patches, which ought to be enough to get them through to the frost as well. 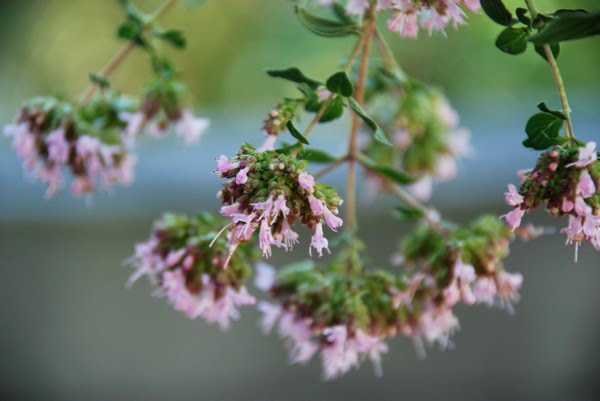 But then, oregano isn’t the only herb going to seed. We haven’t bought a cilantro plant in over five years. That’s a whopping five-year savings of about $13.75. Ahhhhh, yeah. Not really worth bragging about, now then, is it? 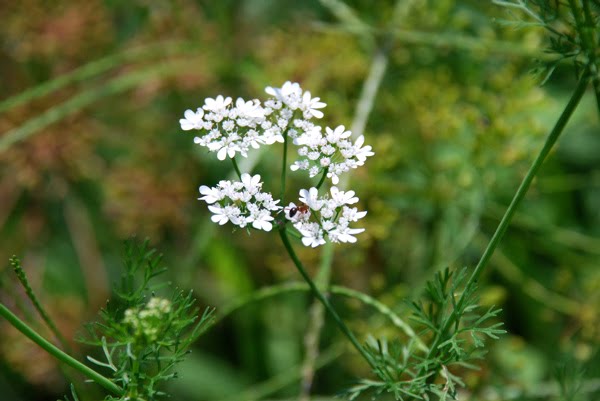 Likewise, dill volunteers for us as well. And still, any time I inadvertently weed a plant out of a bed, I feel badly, despite the fact that we can’t possibly use all that’s growing in our garden. 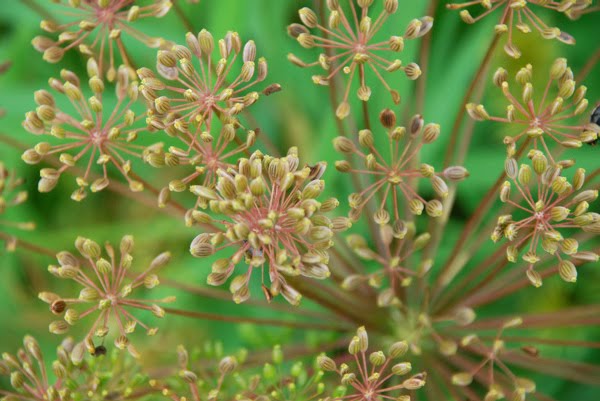 This gal showed up two weeks ago amongst the lavender flowers, and has more than doubled in size. It’s an orb weaver, so harmless to humans (plus, it’s not as though it moves from that spot so far as we can tell, so unless we stick our fingers in its mouth, we’re probably pretty safe), though it is a bug-eating machine. We like bug-eating machines. 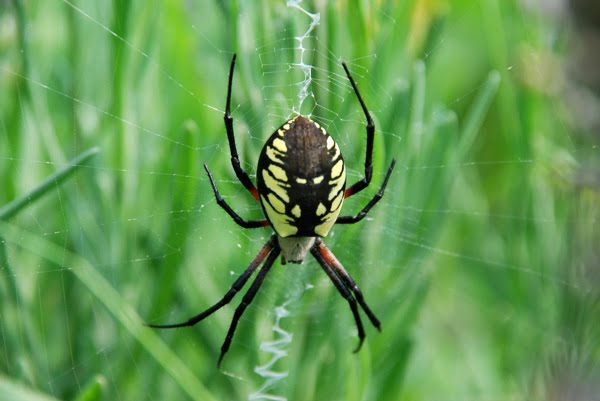 Our tomatillos just started ripening this week. Despite how this looks, I haven’t enjoyed any with my coffee just yet. Tomatoes with coffee – well, that happens, but tomatillos, not so much. As of today, that is. 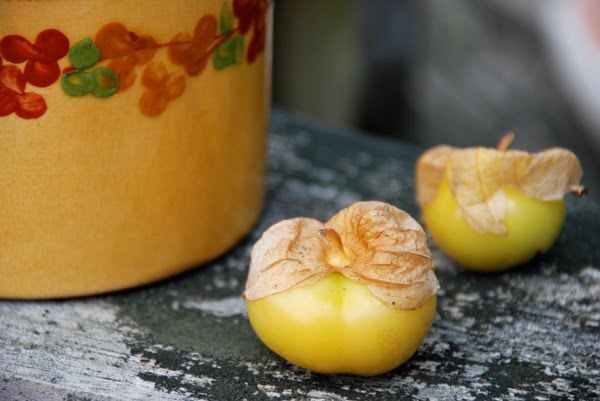 Cabbage is a never-with-coffee veggie in my book, but we’ll have to get slaw-making and quick, as both the red and green cabbage crops are ready for harvest. 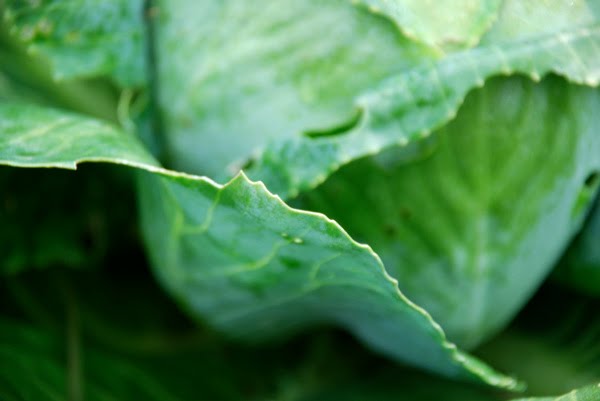 We’re planning fall planting now, and the investigation into a hoop house for one of our raised beds has begun, as I’m planning to grow greens all winter long, so this late stage phase of the summer garden will, with any luck, have a companion late stage. In February. I can only hope.

Dinner tonight: Cornmeal Crusted Chicken Breasts with Corn, Tomato, and Zucchini Risotto and Sauteed Squash Blossoms. Estimated cost for two: $8.76. The chicken breasts were bone-in, on sale for $1.99 per pound, which was still a better deal than the normal boneless, skinless breast price. We paid $3.88 for the two. The cornmeal and flour will cost around a dime, the oil for frying, around 96-cents. The risotto consists of butter for 63-cents, one medium shallot for around a quarter, veggie broth made from scraps, so basically free, $1.30 for the Arborio rice, 1/2 cup white wine for $1.66 (I’m using leftover wine from a bottle that cost $9.99), one tomato from the garden, one small zucchini from the garden, and one ear of corn from the farm stand which cost 55-cents. I’ll add pecorino romano cheese as well, and that’s going to cost around 25-cents, so the risotto costs $4.64 for 4 servings, we’re having 2 tonight, so that’s $2.32, and risotto for lunch tomorrow. The squash blossoms are free in the overrun garden, I’ll stuff each with a tablespoon or so of fresh ricotta and – ahem – oregano, and will saute them quickly in 36-cents worth of olive oil. The ricotta will cost around 19-cents per tablespoon, so $1.14.

9 Comments to This Week in the Garden: Early August