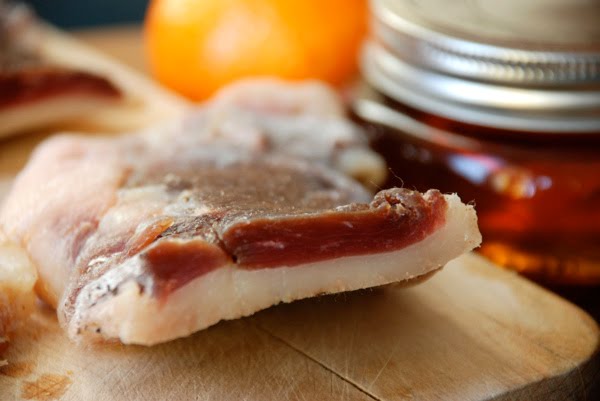 There’s not a lot of meat there in my prosciutto. Darn you, Bargain Basement duck.

“Eee-yeah. You always go for that kind of stuff,” JR’s words pretty much spat out at me as he chewed – reluctantly – my first-ever duck prosciutto.

JR and I have owned Michael Ruhlman’s Charcuterie for a couple of years without curing one damned thing. One week last winter, I spent nearly our entire weekly grocery budget on two pork bellies from a local farm with the intent to make pancetta. Alas, motivation was at a minimum, and eventually, both pork bellies were eaten – cooked, not cured.

It was only while reading Cathy of Mrs. Wheelbarrow’s Kitchen and Kim of The Yummy Mummy’s tweets about their newly-hatched Charcutepalooza plan did the motivation to cure well up inside of me once more. Finally, I had hit curing-craving critical mass.

So, a few weeks ago, on the drive home from a dingy, snow-strangled industrial side street in Boston, while mulling over their Charcutepalooza idea – and the first challenge, duck prosciutto – duck being a favorite “that kind of stuff” for me – I thought, “Why can’t I join in on the curing fun? Why not me? Why not now?” I whine a lot to myself when driving home from Boston. Especially in the winter. It takes over an hour, you know. Waaaah.

I set out to find a duck. On New Year’s Eve day. I found two. Two lame-ish, frozen, and small-by-duck-standards ducks. For $3.49 per pound. Bargain basement ducks of no discernible provenance.

This Bargain Basement duck of mine first had to defrost. And I had to continue driving back and forth to Boston. Nearly a week passed before the wee duck was unleashed from the shrink wrap.

JR pieced the duck for me so that I could start the salt cure as soon as I walked in the door on that Thursday night. He poured a glass of wine for me as I unwrapped the boned breasts from the storage bag he had placed them in, and, when I started flipping through the index of Charcuterie to locate the duck prosciutto recipe, he pointed to the dust jacket marking the space, “It’s already marked. Right there.” Even without such amazing assistance, curing couldn’t be easier.

Basically, tuck the breasts into their own, separate (though adjacent) beds of salt. With no room in the refrigerator – even for such a tiny duck – the salt-encased breasts were placed near our garden potatoes in the basement. Then, I proceeded to forget about them for almost a day longer than I should have.

Not to worry, the breasts were firm, yet pliable when finally removed from the salt. “Holy crap, it’s working,” I said to JR. Now, I feel like this applies to a lot of things: seeds sprouting, pickling, jam and jelly making, cheese making – all things that are generally marveled at nowadays, even while these techniques – and a technique like salt curing – are among the most basic used for food preservation. Historically and across cultures. I annoy myself when I get caught in that “oh, wow, I did it” trap, when I know that there’s a reason why these techniques have been passed down from generation to generation – you know, because they work and they aren’t that difficult to execute. I mean, the results aren’t instantaneous, and therefore don’t fit many people’s definition of convenient, but they are pretty easy to manage if you’re of the mind to try.

So the next 5 minute step was to weigh the breasts and then tie them up in the flim-flam cheesecloth I bought for this purpose. Next time around, I’m going to do better in the cheesecloth department. Oh, and in the duck sourcing department, too.

It was a Saturday, JR and I had a party to attend (many thanks to my friend Chris, who came up with the idea and hosted the party, at which a bunch of our friends made recipes from my book, which we ate over the course of many, many hours. All while watching football. It might only have been better had there been a curing station, now that curing is one of my favorite things in the world.).
I have a tendency to be late to, um, everything, so JR was understandably concerned when I said that I had to get the duck breasts hung before leaving for the party. Which we had to do in 5 minutes. “We have to go, you know. It’s a party for you.” “I know, I know. Don’t worry. It’ll take two minutes. Just as soon as I gain control of this crappy cheesecloth,” I said, my body contorting as I struggled to pull its flimsy layers apart from one another without unraveling the cloth. Only to then fold it back up in an attempt to somehow create a substantial wrapper of the chintzy mess.

JR transported our dish – pulled pork – to the car, while I created two duck breast bundles; one with thyme and one with a giant spring of rosemary – nearly as large as the breast, in fact (I have mentioned that this was a tiny, sad, Bargain Basement duck, haven’t I?).

See what I’m saying? Rosemary as big as a duck breast. Either it’s a gargantuan rosemary plant or a terribly stunted duck.

By the time JR was back in the house, the breasts were kitchen twine-sealed packages with ready-to-hang loops, and back they went to the basement, this time just to the base of the stairs (though, realistically, this space is very likely equally as cold as the potato cellar, so colder and drier than called for by Mr. Ruhlman.).

I weighed the sad sacks just before they went to the basement, and later in the week, saw a tweet from Judy of Divina Cucina that made me think I should have done what she had – her breasts and my breasts both clocked in at around 6-ounces, so she combined hers to make one larger prosciutto.

Brilliant. Me? Not so much.

This afternoon, returning from a slew of errands, JR asked what was on the menu for lunch. With only 3 hours left of real daylight, and a path needing to be shoveled through this most recent blizzard’s foot of snow to the as-yet unsplit wood pile, lunch had to be quick. You see, we heat with wood, so no wood means no heat. And, yeah, it’s cold here right now.

So JR had to get a move on in order to get the wood ready for the upcoming week (on a long side note, this is the last year we buy four foot lengths of wood that doesn’t get delivered until December. It’s a little crazy trying to split wood every other day during the winter, particularly when it seems as though it’s been snowing every other day this year. Tree lengths seemed like a good, money-saving idea at the time, but, ah, yeah – you gotta get the wood delivered a little earlier than December to make it worthwhile.).

Fried eggs were the first best lunch idea I had, along with a slice or two of Seven Stars Bakery’s olive loaf, when suddenly, a vision of tiny prosciutto danced through my head. “Hey, will you get the duck breasts out of the basement?”

“No,” I replied, surprised. “I don’t want that.” “Yes you do.” “No. I don’t,” (pause here for me to get my confused face on, please) “I don’t even like duck.” (wha? who doesn’t like duck?) And where did this conversation end, you ask? Back at the beginning: “Eee-yeah. You always go for that kind of stuff.” 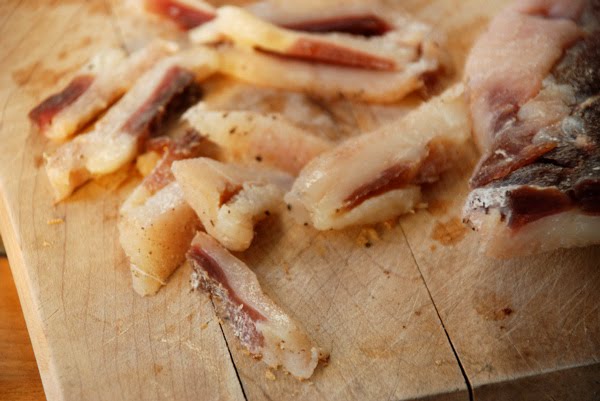 “That kind of stuff” it turns out, includes “all the weird stuff”. Like livers, and heart, and tongue, and lardo – cured fatback. As luck would have it, when I sliced into the prosciutto, the fatty parts reminded me of lardo, one of my favorite treats when we’ve traveled in Italy – and JR’s least favorite, of course, because it falls into the “that kind of stuff” category.

One day, on a poorly-planned trek to Florence from southern Tuscany, we arrived in the city well after the usual lunch hour. This is a problem, because restaurants don’t serve lunch all day long in Italy.

We walked to a spot where a wine bar I loved used to reside, only to find it gone. Yet inside the new restaurant that had taken the wine bar’s place was the nicest man in the world – certainly on that day, perhaps every day, I can’t be sure – manning the operation of the country-casual spot housed next to a high-concept, ultra-modern sister restaurant. Atop the butcher-style wooden countertop surrounding him was a leg of prosciutto (pig, not duck), country bread, and a couple wheels of the sheep’s milk cheese, Pecorino di Pienza.

In broken Italian, I explained that we had planned badly, and had missed lunch. “No pranzo,” he asked, a bit alarmed. “Si. No pranzo,” I confirmed.

He rushed us over to the far corner of the restaurant, and seated us at a small table, surrounded by shelves of wine from floor to ceiling. Fawning over us as though we were little birds with broken wings that he intended to nurse back to health, he delivered us a glass of wine each, and then returned with a spuntino – a snack of bruschetta with lardo and honey. At the time, I was convinced that it was the best thing I had ever eaten – the lardo melted like butter over the charred bread, the honey offsetting the saltiness of the lardo. “I could eat this every meal until I die,” I told JR. “I could die if I had to eat that,” he responded. At least, that’s how I remember it going down. 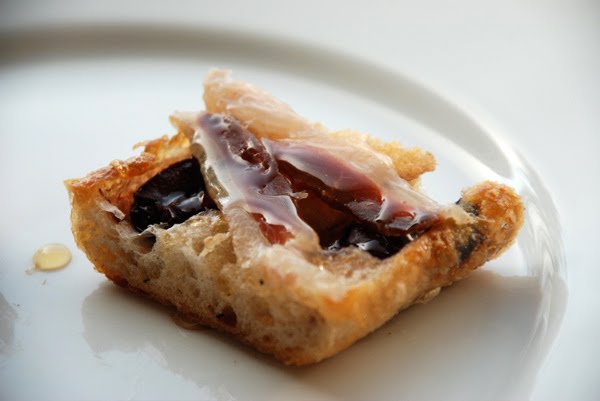 My duck prosciutto is a bit too salty – I suspect the minuscule size of my breasts (ah-hahahaha. I had to do it. I can’t believe I made it this long without going there.) is to blame. Even as I sit typing this, the corners of my mouth are burning from the salt of the snacky bits I’ve picked at – to give me energy to write this post, of course. So I like the prosciutto, it’s just a bit salty, is all.

At lunch today, as I prepared to toast the Seven Stars olive loaf in the egg-frying pan, I realized, “hey, I can make a lardo bruschetta.” Or, a duck prosciutto-that-happens-to-be-mostly-duck-lardo bruschetta. Out came the honey from our hives, and into my mouth went the salty-sweet bites of nostalgia – homegrown nostalgia, at that.

“You’re a real frontier woman, you are,” JR said as the bruschetta came together, “curing your own meats, using your own honey. What’s next?”
And what is next is the salt cure. I’m thinking I’ll do both bacon and pancetta. Finally, finally, finally, I’ll get to that pancetta. Thank you, Cathy and Kim for the giant nudge.