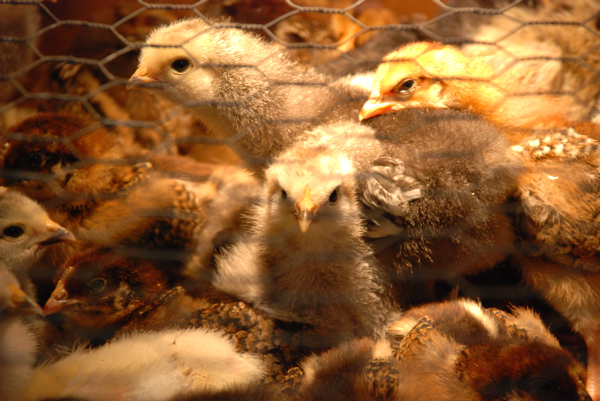 I feel completely out of touch with our chicks.

It may have something to do with being away from home for a few days immediately after they arrived, though I suspect it may be more, well, more deliberate than that.

Deliberate, yet subconscious. As though my superego is encouraging me to keep my distance. Perhaps I’ll have a strange dream about chicken avoidance, similar, in strangeness, at least, to the one I had two nights ago about my mother driving us right up alongside a black bear while I screamed for her to gun it. The gas, not the bear. I don’t know how they’re connected either, but this at least gives a reference point for my strange animal dreams (which, by the way, are completely different from my strange action-adventure dreams).

As I type this, JR is in his workshop, the chicks’ temporary home, communing with them. Sure, I’ve fed and watered them a few times, but I’m not involved in these chicks like I have been with others that have come to live here. In the past, I’d been known to sit for hours, mesmerized by their jerky motions, the mad dashes across their pen, the pig-piling (I’m not sure why this shouldn’t be species-specific. Chick-piling is what these guys do.), and the one or two chicks that take more than a passing interest in we humans.

Our first shipment of chickens arrived nearly seven years ago. We had ordered all hens – 25 in all – and Murray McMurray threw in (well, I’m sure they gently placed in) one exotic chick, later named – most creatively, might I add – E.B. That’s short for Exotic Bird.

Two of the Rhode Island Reds in that flock turned out to be roosters. One, the Beta, we sent to live on a friend’s farm where he would have the benefit of being the Alpha, and the (no, not the Omega) Casanova to a medium-sized hen harem. The rooster that stayed behind was a mean bastard. I still have the talon scars on my calf to prove it, and I’ll never forget what a ruddy-colored rooster with iridescent green tail feathers looks like as it flies through the air at you sideways, feet first. Here’s a hint: the scare doesn’t come from the prehistoric feet aimed squarely at you. You know those are going to hurt. It’s the absolute hatred in the rooster’s eyes as he sails toward you, in super slo-mo,  that will frighten you for years, long after the talon tears in your leg have scabbed over and the scabs have fallen off. Leaving, of course, purple talon-tear scars.

Nonetheless, it was a sad day when I pulled into my spot in the driveway just before Christmas three years ago to the sight of what I thought were leaves strewn all across the yard. Only the leaves were ruddy on the wide end, lighter on the thin end. And we had already raked up all the leaves that had fallen. Neighborhood pit bulls had played tug of war with our mean-ass rooster, leaving only his feathers in clumps on the lawn as evidence that he had existed.

This year, our remaining hens, nearly seven years old, stared laying eggs again in the spring. They take a winter hiatus, which, if you’re interested in the fine art of chicken hypnosis and/or absurd first-time chicken-keeper stories, you can read about here.

We were grateful for the return to production, though our original flock of 26 had been culled to just seven over the years.

E.B. had long ago flown the coop. I say that not as a cliche, but as what E.B. actually did. Birds of a feather do truly flock together – I mean it – and E.B. had roosted nightly on her own, up on a perch three feet above the other hens. One day, she finally decided she had had enough.

After days passing without an E.B. sighting, we sat in our every-night-sit-and-chat chairs in the garden. The topic turned to chickens, and JR asked me whether I had seen E.B. lately. Like synchronized swimmers, only without the flowery rubber caps, we turned our heads simultaneously in the direction of a movement just beyond our coop, in the neighbor’s yard.

Looking back at us – with just one eye, of course, as they can only give side-eye, being chickens and all – was E.B. She locked her singular eye with ours, then turned abruptly, and waddled away toward the creek and the treeline there, where we imagined she roosted high in the branches each night, unaware of the coyotes in the neighborhood.

We never saw her again.

Over the years, many of the other hens met their maker through less-traumatizing (for us, the chicken-keepers) events, though – quite horrifically – the last seven disappeared quickly this May, over the course of just two weeks.

One morning, I awoke to the shiny black feathers of our Black Australorp in piles around our back deck. Evidence of a dog or coyote attack, I thought. The next day, two Buff Orpingtons were also missing. And within another day, another Black Australorp and a Barred Rock were gone. We were down to two Silver Laced Wyandottes. We barricaded them into the coop. We arranged for caretaking. We went on vacation. And when we returned, they, too, were gone. Without a trace. No piles of feathers, no holes in the coop, nor digging under the run, and all of the eggs in the nest boxes had been gnawed on.

Just before the disappearance of what remained of our flock, we had heard a fisher cat, angrily answering the call of the coyotes – a strange, wild predator opera of sorts, the cat screeching from up in the tree where the coyotes had sent it, the coyotes shrieking at the cat from the ground. However, we’d been told that while fisher cats can kill multiple chickens during one coop raid, they aren’t known to carry their victims away. We knew that coyotes would tear the birds to shreds, leaving only those horrible piles of feathers, so, for now, we’ve settled on the possibility of a raccoon being the chicken murderer and egg thief. 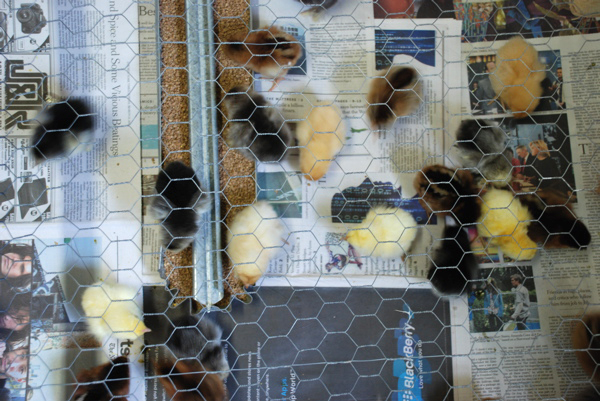 Day-old chicks. In motion. They are always in motion.

This new flock of chickens will be very well-protected, yet 30 or so will never see their six-month birthday. And that is because we plan to eat them.

Only 12 of the birds that we ordered are hens. They will be spared, as they’ll provide us rich, orange-yolked eggs. Hopefully for many years to come.

We received 42 chicks in total, and 5 of them have died since we received them. The remaining chicks are healthy – very healthy – and will move to the completely raccoon- (and other vermin-) proof, palatial chicken mansion in 5 or 6 weeks. I’ve said it before, and I’ll say it again: the coop is bigger than our kitchen. And it’s almost as big as our kitchen and living room combined. But then, we do live in a tiny farmhouse.

At around 14 weeks, we’ll begin to slaughter the roosters, freezing most of them for future eating, though I’m sure that at least two will be devoured during week one.  For a meat eater, there isn’t anything quite as satisfying as a fresh chicken you’ve raised yourself, cooked on the grill. Enthusiastic eaters that we are, it’s unlikely that we’ll be content with just one grilled chicken that first week that the chickens go off to slaughter.

I know that this idea of eating chickens – or any animal – that one knows is disturbing to many people, but JR and I eat meat, and I’d rather know that the meat we’re eating comes from animals who have had a happy existence. That they are well cared for, are fed organic food and the occasional garden slug (they do love slugs, those chickens do). To know that they’re allowed to leave the palatial chicken mansion to roam the yard – when the danger of raccoons, fisher cats, and coyotes isn’t a factor, of course – and generally have a good, arsenic-, antibiotic-, and added-hormone-free life makes me feel better. Selfish, sure. But you can’t get more clear about knowing where your meat comes from than you can by raising it yourself.

Our plan, after week one, is to eat one chicken per week. If we adhere to this plan, we’ll have enough chickens to get through until the first week of April 2012. If, let’s say, we decide to eat two chickens per week, we’ll be eating chickens we raised through the end of this year.

Of course, this doesn’t factor in the turkeys. Fifteen turkeys arrive later this week, and only one of them will be eaten by our family at Thanksgiving. We’ve sold two others for Thanksgiving meals, but that leaves us with 12 turkeys, most of which will find their way into the freezer alongside the chickens.

Last night, needing to soothing my frayed nerves, I brought a chair into JR’s workshop. JR sat on the floor, and I in my folding chair, watching the chicks. A Buff Orpington, the golden wing feathers of a mature hen just beginning to replace her downy baby feathers, burrowed into the sawdust, rolling around as though she wanted to create a sawdust blanket and pillow. When she’s older, she’ll use this same method of rolling around, only then it will be in dirt, to clean herself. Counter intuitive, I know. But adorable when they’re only as big as a robin, and it’s sawdust, rather than dirt, flying.

A diminutive Araucana hen jumped up into the galvanized steel feeders that JR had carefully affixed to the wall, causing JR to fret – rightfully, it turns out – about chick poop in their food, as she scratched to the bottom of the well, looking for the most choice bits of feed. By the end of the year, she’ll be laying colored eggs in shades of green and blue, the spectacle of which will hopefully erase that of the shiny, molten chocolate blob that JR removed from atop their food last night.

A Speckled Sussex rooster stretched his neck out beyond the chicken wire, his body nestled in among the other chicks, his head peering around in the chick equivalent of the clouds for flies with a bad sense of navigation – chickens are quite good at yanking wayward insects out of the air. He never did get his prize. At least not while we sat there.

Already, an alpha male has emerged. Larger than the rest, and quite curious about we humans, he is commanding, but not aggressive. We watched him, he watched us back. Finally, JR said, “Does he have feathered feet?” Yes. He does have feathered feet. He’s a Light Brama, an Asian breed that is thought to have come to the United States via India sometime around 1850.

“You got chickens with feathered feet, and you think we’re going to kill them?”

There was a long pause, then, in case I hadn’t heard him the first time, he repeated, “I mean, do you really think we’re going to kill them?”

“Well, okay, maybe not the ones with the feathered feet, then,” I responded.

Already, it seems we won’t eat quite as much chicken this year as we had thought. And it seems I’m not so disconnected from our chicks after all.

13 Comments to On Chicks Becoming Chickens. And Chickens Becoming Dinner.