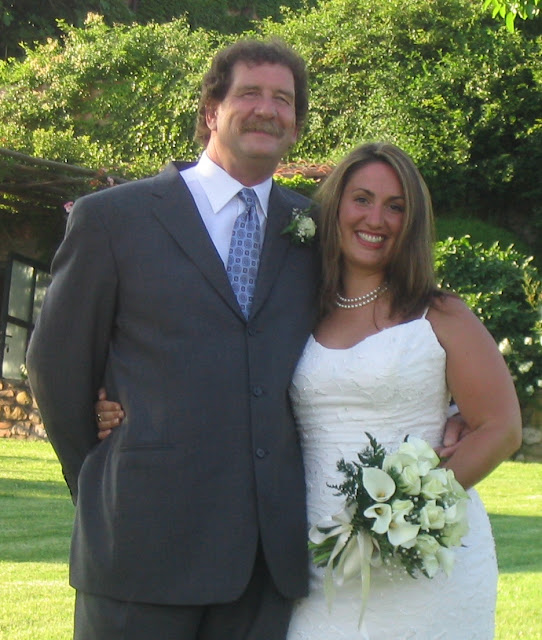 At our wedding, a little over 8 years ago.

Though this initially has the look of a sappy anniversary-type post, I can assure you, it is not. Well, at least not a typical sappy-love-of-my-life-type post.

I am married to an amazing man.

I don’t think that this is just my opinion, because he has a slew of friends who think he’s pretty cool, too, but how it plays out for me is as such: I have a whim, he executes it. This may mean tilling a potato patch by hand. Or getting married in Italy. Or building a new turkey coop. Or supporting my dream to write a cookbook, even when pursuing that dream meant not looking for better-paying work when we desperately needed me to have better-paying work.

He is a master of wordplay, a slapstick-style comedian, and a sensitive, caring friend. He can be lighthearted and fun when you need that, and deep and insightful when that’s what you require.

There is a list of reasons why I love him, which I repeat to him frequently, but not frequently enough. He is industrious, he is a laugh-riot, he cares first about the people around him, he is a thinker, yet he can be base (and this, might I add, fools people into thinking he is not a thinker. Genius.). He drinks Budweiser. From cans. And Barolo. But only if it’s been decanted first. He gets just as geeked out as I do about Brockton beans, Marina di Chioggia squash, and Boothby Blonde cucumbers. He loves animals. He loves the ocean. He loves the outdoors, our garden, the Baltimore Orioles – the actual birds, not the baseball team, he is a Red Sox fan, of course – in their nest next to the garden, the barn swallows that fly so close to his head that they fluff his hair when they dive-bomb him while attempting to protect their babies in our barn, and the hummingbirds who have been rather scarce since the wisteria blooms faded.

It’s nearly 1am. JR is asleep in the trauma ward in his light blue slightly funkier than standard-issue johnny – with an attempt at artiness, there are varying sizes of askew darker blue triangles printed all over it. His breath flows in and out, fluffing his mustache, and each breath makes me a little more weepy.

Driving down the highway this afternoon, returning from a job north of Boston, his truck was hit by an 18-wheeler. He hit another car, then the guardrail. His truck was so mangled, they used the Jaws of Life to extract him. Judging from the amount of dried blood that I washed off his face, arms, hands, and chest earlier tonight – this, after someone here at the hospital had done at least a cursory wash to be sure he was presentable to family – he must have been a very scary sight at the scene.

There are quite a few staples in the back of his head (I can’t count them, as he isn’t allowed to lift his head), his ribs are broken, and he has what the doctor called a “small” brain bleed. They tell me that this will heal in time, and I know that it will. Know that it will.

When I arrived here, the first thing he wanted to know is if everyone else was okay. That no one else was hurt, or killed. It took a few hours, but finally we learned that a med flight had been called for the accident. And that it had been called off. Because JR, the only injury in the accident, was alert, and stable enough to be transported by ambulance*.

With the relief of that news, he moved on. “They cut off my clothes,” he said. “Yeah, I can see that.” “Those were my favorite work pants.” “The blue polyester fake Dickies?” “Yep. Those ones. My favorite polyesters.”

So, like I said, I know that he’ll be fine. Because he’s still here, he’s still a smart-ass, and he is resilient.

And we, together, are very very lucky, indeed.

I wrote this two nights ago. It’s been a scary time since Tuesday afternoon. No one prepares you for what happens after an accident, and the process of discovery about what happened to your loved one – my husband and best friend, in this case – is disjointed and stressful in the aftermath of an accident.

JR doesn’t remember what happened either, but what we do know is that he was driving on the highway in the low speed lane. He drives a utility pick-up truck for work, the sturdiness of the vehicle and the fact that he was wearing his seat belt probably saved him. As he came over the crest of a hill, he saw that the traffic in front of him was stopped. He jammed on the brakes, and the next thing he remembers, he was in the hospital.

He was hit squarely in the back end of his truck by that 18-wheeler, he ended up in the median. Having now seen the wreckage of his truck, I know it had to have been a horrific scene on the side of the highway, which was closed for 2 hours afterward.

He regained consciousness in the ambulance and has been alert since. He does have some memory issues, but is doing very well cognitively overall. He has 10 staples in his scalp (the doctor counted them yesterday afternoon), and the broken ribs. We really are lucky that he’s alive – and while I don’t want to understate his injuries, because he is most definitely injured, and will be recovering for a long time to come – given the severity of the accident, I consider him as good as having walked away unscathed.

We are home now. Yesterday, the doctor told us that ten years ago, JR’s brain bleed would have been called a concussion. Now, they have the tools to identify it more precisely, so brain bleed is what it is. As the doctor said, ten years from now, what we currently identify as concussions will probably be called something else because the technology will have evolved.

As I lay upstairs last night, with JR on the couch downstairs (he is relegated to the first floor to avoid climbing stairs for a while – to avoid dizziness and a possible fall), I realized that one reason (and possibly the only humanistic one at that) that people are sent home so early from the hospital – when you are sure – absolutely, one-hundred percent certain that you should be staying at least another night – is that there is nothing, really nothing in the world at all, more comforting than seeing your loved one at home. In your world. Injured, hurting, exhausted – but home.

*we determined, with the help of JR’s brother, who is an EMT, that he must have been conscious at the accident scene for them to transport him by ambulance, rather than med flight. However, with the head injury, he doesn’t remember being awake until the staples were being put into his scalp at the hospital.