Stupidity in the Garden 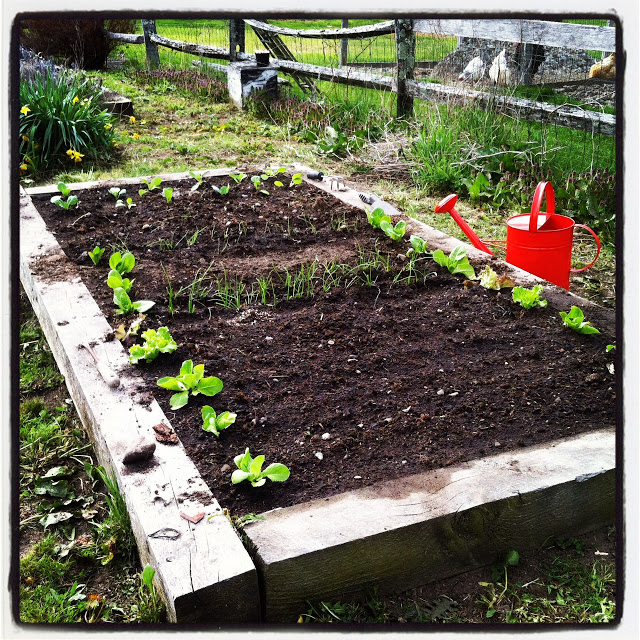 When there used to be leeks. and no cat pee.

Normally, I like to think that we have tranquility in the garden, though this is simply a case of choosing what memories one wants to have.

There are rabbits who have outsmarted us, chewing through the ostensibly rabbit-excluding fence that lines the bottom of the more decorative split-rail.

Once the adorable little crop-decimators are spotted within the fence by the humans, they start dancing around, cottontailed rear-ends springing into the air as they try to evade us – quite successfully, actually – have you ever tried to capture a rabbit with only your hands for a trap? That’s a sure way to make a fool of yourself, lurching from side to side as the rabbit gleefully jumps. Quite a game that is. Quite a game, indeed.

Eventually, we persevere, locating the rabbit gateway into the garden, then securing it with industrial strength metal twist-ties, which now patch our fence in multiple locations. Summer isn’t upon us yet, and the rabbits aren’t hellbent on getting into the garden, but once those beds are packed with tasty treats, there’s sure to be another spot in the fence to have its turn being patched.

The neighbor’s cat has an uncanny way of determining where to relieve herself. Essentially, any newly planted bed is a cat toilet in her eyes. Overturned garden center flats protect the young carrot, beet, and kale seedlings as they emerge from the soil. These plastic barriers were set up a bit too late, as they had already had their inaugural toilet experience, which wasn’t very kind to the leeks (oh, geez. how did I miss the opportunity for that pun?!), only half of which remain after the cat used them as a litterbox cover crop.

And, having been planted just this past weekend, and having been promptly peed upon during their first night, so, too, are the tomatoes now protected from the cat by upside-down pots. 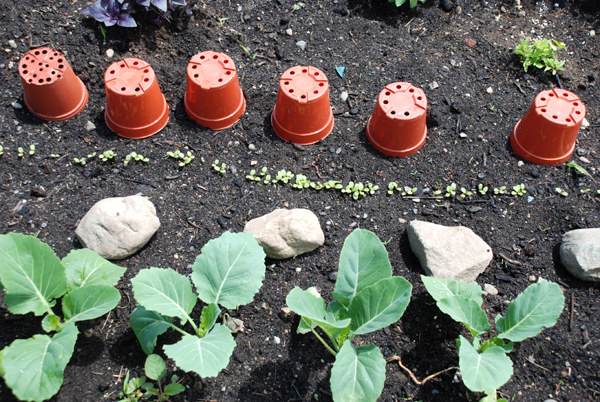 like this, only there are tomato plants in the bed, not collards and lettuce seedlings. no rocks yet, either.

Asparagus is early this year, and with the early crop comes the early arrival of asparagus beetles, a fairly smart lot, as far as beetles go, for they register a large shadow looming over them, and dart to the other side of the frond, a beetle-human hide-and-seek that only works out to their advantage when they jump to the ground, and the human feels too lazy to dig in the dirt for them.

It’s not clear if the losing outcome for the beetles is so good for the human, though, as my current method of beetle elimination involves one of two options: a.) squashing them against the very frond upon which they hide, or b.) picking them off of the frond, then rolling them around between my forefinger and thumb until they are squashed.

In both approaches, there are beetle guts upon my hands which makes me long for a natural predator who could take care of these asparagus-infesting pests.

If only I had been a touch smarter, and less distracted by pretty objects.

About a month and a half ago, I found this adorable little cocoon in the garden. 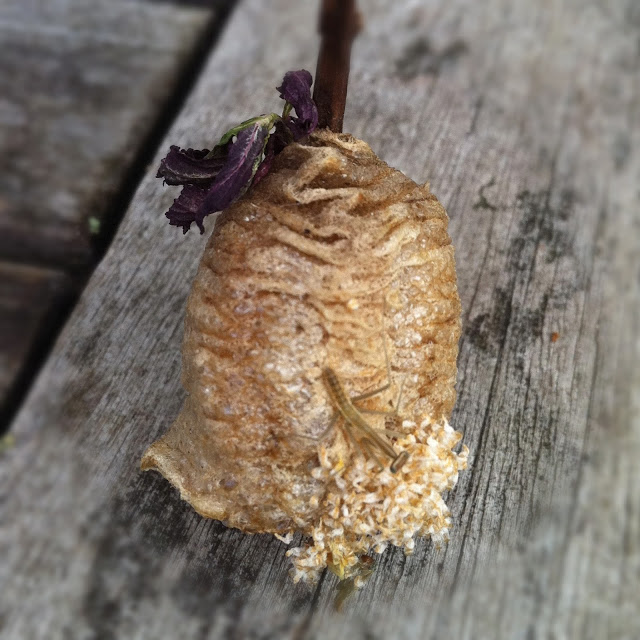 “Oh, so pretty,” I thought.
This thought was followed by quiet contemplation.

“Hmmmm. I wonnnnder what it is.”

Contemplation time was over. It was time for action.

“I know! I’ll bring it into the house where I can look at it on the kitchen window sill any time I like.”

And when it is time for action, well, Google search be damned! Let’s just place this pretty little, unopened cocoon in the kitchen window, shall we?

Yeah. And then let’s wake up one Sunday morning a few weeks later, start preparing our coffee, and look out the window, only to see about 100 pairs of baby praying mantis eyes staring back. Whadda ya say we do that?

“Honey,” I called to JR in the living room.

“Come over here please. You have to see this. I feel like I’m being stared at by a hundred aliens.”

Upon assessing the situation, he responded, “Ahhhh, yeah. That’s a problem.” And then a pointed, “how are you going to get rid of them?”

They were, after all, my problem. So I did the logical thing. I began tripping their little praying mantis nymph bodies off of the glass onto a paper towel, carted them outside on the paper towel ark, pushed the paper towel into a shrub, and tried to assist each one in getting onto a suitable leaf home.

Meantime, JR opened the storm and the screen windows to allow them free passage to the adjacent climbing rose.

The whole get-onto-the-plant thing didn’t seem to make a lot of sense to the window-evacuated nymphs – apparently they aren’t that bright when they first come out of the ootheca (cocoon my ass! it’s an ootheca. just Google it!), kind of like their human captor, only she’s had 41 years to figure this stuff out, and they’d only been on the outside for about 10 minutes.

Rather than seeking greener pastures – or greener, thorny shrubs – I counted 26 nymphs on the window exterior, and 32 on the bulkhead, which is directly below the kitchen window, and none, not one praying mantis nymph on the rose bush. Oh, and I looked closely, too, I sure did.

By Monday morning, we were down to 6 indoor praying mantis babies, only one of whom I’ve accounted for since. For that baby was found lying feet to the sky on the window sill.

I’ll have a little service for her soon, and plan to bury her in the asparagus patch, where I hope her tiny corpse’s presence will help to deter the asparagus beetles.

For, on that fateful day of discovery, had I only contemplated a little longer, and had I only done a quick search, I might have learned that my ootheca (for I would then have known its proper name) contained a hundred or so very beneficial bug-eating praying manti (is that plural for mantis? It just seems like it should be, and seeing as we know that I don’t use The Google very well, I’m just gonna go with it.).

Oh, if only I had done those two little things, perhaps my fingers wouldn’t be stained with both tick and asparagus beetle blood.

*note: lady beetle larvae and a tiny little wasp will also help me with asparagus beetle slaughter, which is nice, because I practice ladybug husbandry when they infest the house, so their survival is guaranteed, and I’m not about to bring a wasps’ nest into the house, as we’ve discussed above, so they should be safely looking for asparagus beetle prey outside. Hopefully they’re doing that now.

14 Comments to Stupidity in the Garden