What to Expect When You’re Starting Out Pig Farming 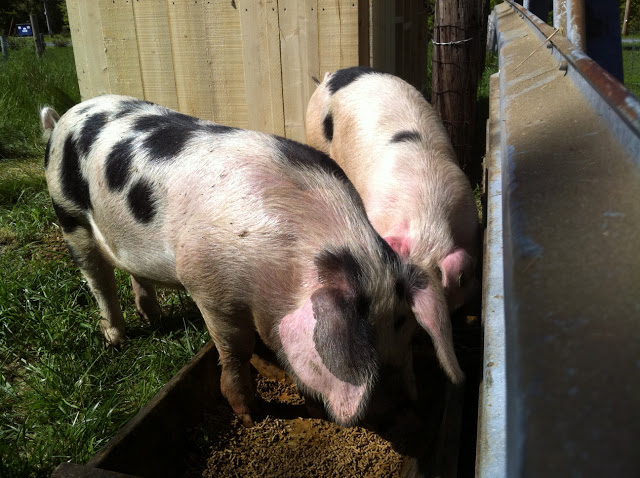 “You know your life is complete when your wife gets you pigs for Christmas,” JR announced to my great-uncle during a visit to our house this past weekend.

After he made this bold statement, we proudly toured my great-uncle around showing him the temporary fence that would guide the pigs from their winter home in the barn to their permanent residence in the pig meadow, the partially-completed sow shack, and, of course, the pigs themselves.

My mother called a few hours later, “Uncle Fred is a bit concerned that you two don’t know what you’re getting yourselves into with a pig farm, and he’s also nervous that your neighbors won’t be pleased.”

Fair enough. Particularly on that first point. As I say now, with enough frequency that it is starting to lose its meaning, “We don’t know what we don’t know.”

Nothing could be more true, though.

For instance, no amount of book reading is going to tell you what to do when, four weeks into owning your first pigs, in the course of delivering their morning feeding, you notice a bloody growth coming out of your favorite piglet’s rear.

The logical thing to do in this situation, as far as my logic works, is to panic.

A good panic is lost on oneself, so I decided to dial in for panic reinforcements.

“Hi honey. We’ve got a problem here. Prudence has a big, bloody thing coming out of her ass. Like, the size of an orange. Um, call me.”

Meanwhile, I took a picture. And sent it to him. I’ll spare you the image, but just for the record “rectal” and “prolapse” together are just as bad as they sound on paper. Or on screen. And particularly dreadful in a photograph.

We didn’t even exchange our customary pleasantries when I answered the phone.

“Oh boy,” he said, “that’s a rectal prolapse. I recognize it from some of my cow-rearing videos.”

Thank goodness that he had watched cow-rearing videos when he was rearing cows, or the distress to the rear of our pig would have remained a mystery.

Hurdle One had been overcome. We had an amateur, yet accurate, diagnosis.

As it turns out, in our area, local veterinarians don’t deal with pigs:

Fortunately, a more experienced local pig farmer gave us the contact information for the only traveling vet in our area. I dialed, still in a panic, only now, the panic was more along the lines of “won’t anybody help my pig?!”

The doctor answered, and he was very helpful, explaining the situation to me, the possible causes, and the treatment options.

But he wasn’t able to come to our house that day. Worse still, he told me that if Prudence didn’t get medical attention right away, she was going to die.

Now, most pig farmers would probably look at a small pig with a chunk of her rectum hanging outside of her body (mmmm. you’re welcome.), think about vet bills for a half a second, then decide that they really would enjoy a feast of roast suckling pig that weekend.

Oh, but not me. I looked at the pig, looked to the heavens, looked at her again, and said out loud, “No way! I can’t eat Prudence!”

JR rushed home from work, we loaded her into a crate, put her in the back of his truck – which we named The Pig-bulance – and drove an hour north from our home to Tufts Large Animal Veterinary Hospital where the very talented and very nice doctors kept asking us, “Sooooo, is she a pet?”

“And you still want the surgery?”

“Yep. We still want the surgery.”

You see, aside from being JR’s Christmas gift (and who wants to tell the story of their Christmas gift bleeding out a month after it arrives on your property, even if you are an adult?), these two pigs, Prudence and Rebecca, represent the start of our small-scale pig farming enterprise. They are the Founding Mothers, a pair of Gloucestershire Old Spots, an endangered breed, with fewer than 200 breeding stock of their kind in the United States. We had to save her. 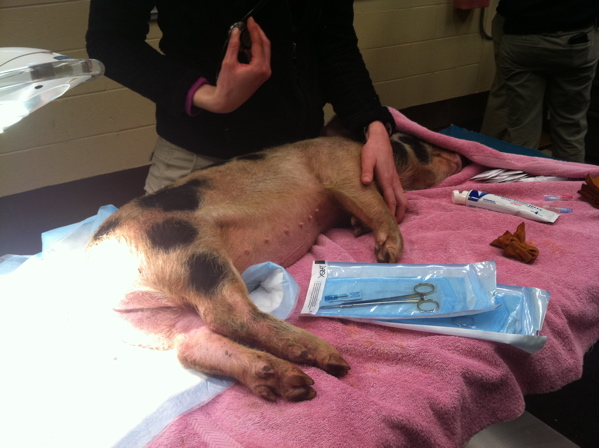 It’s best for all of us that the light is so bright on her prolapse. Trust me on this.

Three doctors worked on our drugged up pig while we stood by and watched. An hour or so later, Prudence’s rectum was back on the inside (whew!), but the threat of relapse was still present, and we left her overnight, a bit skeptical about whether she’d come home.

But five days later, she did – and, yes, we did go visit her in the hospital during her stay, too. And brought her bananas. Because Prudence Pig loves rotten bananas.

As it turned out, Prudence’s prolapse was caused by a parasite – an intestinal worm, which young pigs can be quite susceptible to, and for which the hospital and we treated her and her sister, Rebecca, with success.

So as far as knowing what we’re getting ourselves into, I’d say I agree with Uncle Fred. We have a lot to learn. And while we have some indication of what to expect while we’re pig farming (for we are reading up, oh we sure are), we also know that other things will go wrong in the raising of our pigs, and, unfortunately, it is very likely that we’ll be woefully unprepared for at least a few of those things.

On the upside, at least we have the number of a traveling vet now, and a top-notch vet hospital, if ever we need either.

To Uncle Fred’s second point, the role of our neighbors in our enterprise is a little better defined. Thank goodness for that. Our town passed a bylaw in 2005, establishing it as a Right to Farm community, so even if we thought our neighbors would take issue with pigs being raised next door, it is our, and every resident’s, right to raise animals and pursue agricultural endeavors on our property.

Of course, this doesn’t mean that no one will take offense to our raising pigs here, and we’ll do our best to keep our neighbors happy, too – neighborhood gifts of bacon, anyone? Of course, that’s only after Prudence and Rebecca are bred later this year, give birth, the piglets are raised to market weight, and the bacon is cured, but even the promise of bacon should serve as a complaint deterrent, shouldn’t it?

For now, I’ll expect that it will.

*on a side note, and because you may be wondering, Prudence and Rebecca, along with their soon-to-arrive boyfriend (tentatively named Zeke), will live long, happy lives here. It is their offspring that we intend to raise and sell for meat.