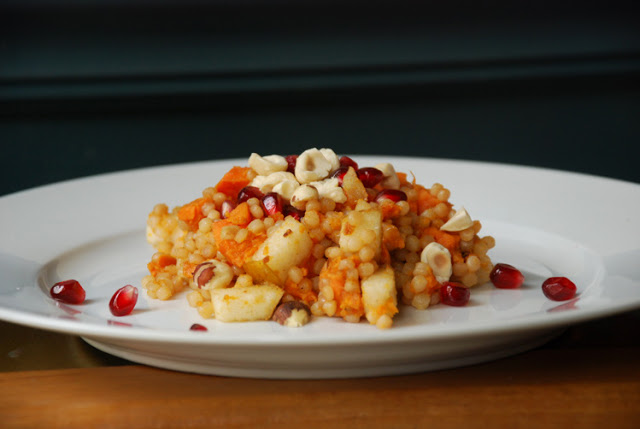 For the last month and a half, one version or another of this salad has been my workaday companion. Sometimes it’s made with butternut squash, sometimes apples stand in for pears, occasionally, there are walnuts rather than hazelnuts. But this version is my favorite. And so, I am embarking on Week Seven of this Israeli Cous Cous Salad for lunch.

Now, if that isn’t evidence enough of an obsessive personality type, I’m not sure what is. Perhaps a few additional examples will help:

Exhibit A: An entire month during my freshman year of high school during which I ate nothing but ice cream. Strawberry, chocolate, and vanilla ice cream. Lost weight, too. (Please, let’s not discuss the obvious nutrition issues here. I’m middle aged. I get it.)

Exhibit B: Mrs. T’s pierogies every day after field hockey practice during my junior year of high school. Again, icksnay on the utritionnay alktay, ‘kay?

And that brings us back to this dish. It’s vegan (though I am not), has a little tiny bit of fat in the form of olive oil (you do need some fat, you know), as well as fiber, fruit, and nuts.

It’s way far away from a month of ice cream in terms of nutritional value, and it’s almost as tasty. Let’s be honest here. In a battle for the title of Most Tasty, the only food that might be able to take down ice cream is cheese. And I’m talking stinky, creamy cheese. Or bacon.

Cous cous cooking note: Though the container of cous cous states that this is a toasted pasta (toasted pasta pearls to be exact), I opt to toast it a bit more – like, to the point where it actually looks like it’s toasted – before continuing with the cooking.

Coat the bottom of a medium saucepan with a tablespoon of olive oil, place over medium heat, add the cous cous, and stir frequently until the pasta is a light golden brown, 5 to 7 minutes. Then follow the manufacturer’s instructions for cooking.

Having now made 6 weeks times 2 batches of this salad, I can tell you that the cous cous-to-water ratio is generally 1 cup dry Israeli cous cous to 1 1/4 cups water, and that it takes around 12 minutes for the cooking to be done.

Also, if you’re making this over a weekend, the sweet potato can be roasted a day ahead of when you’re assembling the salad (particularly handy if you’re already roasting something else on Saturday and/or don’t want to be bothered with the task on Sunday). 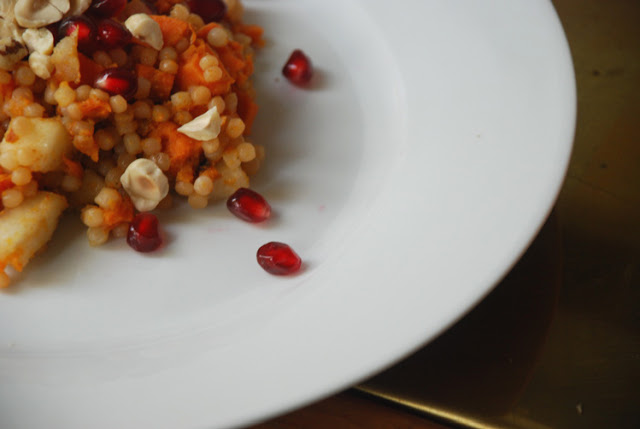 Posted by Amy • January 9, 2013 • 9 Comments • Leave a comment!
← My Favorite Holiday Cookies and a Recipe Journal Giveaway at LoveFeast Table
Cannellini in Fiasco: White Beans Cooked in a Ball Jar →