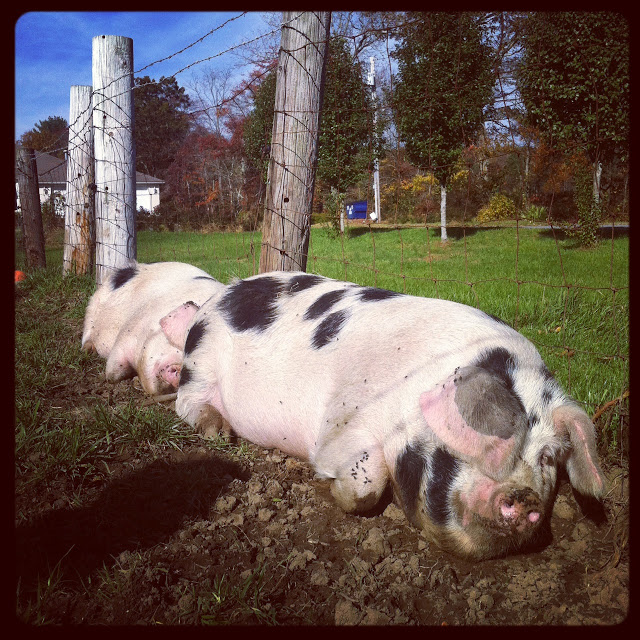 For real. It’s a thing. Today is National Pig Day.

Saturday at our local feed and grain store is a busy day, horse owners loading their pick-up beds with bales of Canadian hay, our chicken-owning neighbors buying feed for the week, and pig owners like us buying grain and confessing to the store owner our sin of not having filed an application for a piggery permit with the Board of Health in our town.

For when you own pigs, you do not have a farm, you have yourself a piggery.

We learned this upon receipt of the letter from the Health Inspector, which arrived a couple of weeks ago, along with a piggery permit application, and town piggery regulations.

“Oh, yes,” the owner of the grain store said, “you have to have a permit.”

Then she reviewed all of the criteria: you have to register a pig over 10 weeks old, for that is an adult pig.

If the pigs are housed in a barn, the barn must be mucked out weekly, and all piggeries – now that we know the technical term – must have a plan for dealing with the stench of pig manure.

I nodded, yes, yes, we understood all of that – we had, after all, read the regulations that the Health Inspector had sent along with his letter about our piggery having come to his attention – by means of the Health Inspector himself driving by and spotting a pig in our yard – and then the grain store owner announced, quite happily, “March first is National Pig Day.”

I think she must have found my arms-up-over-my-head, “woo-hoo!” response sarcastic. It was not, I was genuinely enthused – so she added, “it really is. It’s March first.”

I told her that we would celebrate. She said that they would, too.

I figured we’d have pork chops for dinner. Maybe use bacon fat to saute carrots, possibly top mashed sweet potato with crispy bacon. However, I could not have been prepared for what “celebrating National Pig Day” means to my grain store-owning neighbors. 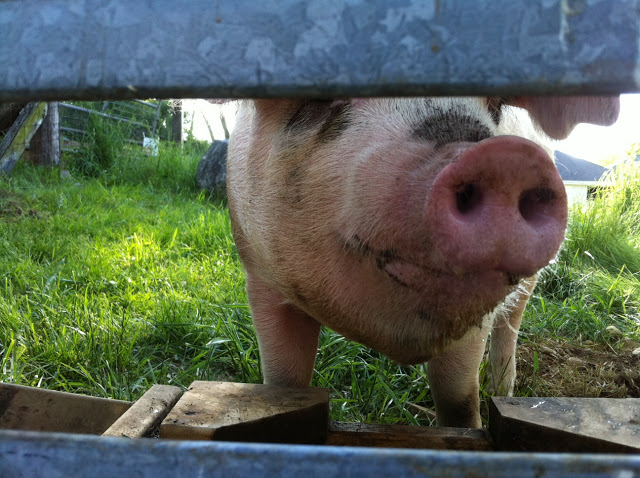 How could you not appreciate a snout like that? And those spots? Please now.

I realized that during our last visit, he had been outside the store gathering our bale of straw when she had informed me of the holiday.

“They really get into it over there.”

“Yeah, she seemed pretty excited about it when we were there the last time.”

“No. I’m serious. They really celebrate.”

This is the part of the conversation when there is no noise. There is only thinking about what “they really celebrate” means.

“When I was in there today, she told me that it was National Pig Appreciation Day tomorrow, and asked if we were going to celebrate.”

“Uh-huh.” (note to self, don’t raise arms in the air and yell “woo-hoo” when you are genuinely enthused by a made-up holiday, but unlikely to actually do anything about your enthusiasm. Because it is, um, a made-up holiday. And really, isn’t every day National Pig Appreciation Day? Why does everything have to be so commercialized? Sheesh.)

“Then she said to her daughter, ‘remember how we used to celebrate National Pig Day?’ And her daughter said, ‘I don’t really remember any of the food, but I do remember dressing up.’”

“In costume,” he paused to let it sink in, “in pig costumes.”

“And they joined a club, somewhere in Texas. They sent in three dollars and they didn’t get anything for it, except that they could say that they were in this National Pig Appreciation club.”

“At least it was only three dollars.”

I’ll bet. Because there has to be a lot of demand for being in a pig appreciation club that provides no pig and no pork. Not even a membership card. Or a plastic pig snout.

Further investigation revealed that National Pig Day (this is its official name. I imagine that the name evolved over the years, and “Appreciation” became implied) was started in 1972 by two sisters, one who lived in Texas (ah-ha! That’s who got the three dollars!), and their intent was to “accord the pig its rightful, though generally unrecognized place as one of man’s most intellectual and domesticated animals.”

Apparently, there isn’t an established National Pig Day celebration policy, so pretty much anything goes. You can abstain from eating pork, you can eat only pork, you can feed your pigs a treat, like fruit salad (our pigs get fruit salad on a pretty regular basis, thanks to compost from our local Whole Foods. See? Every day really is National Pig Appreciation Day around here.).

You can hold a parade, you can watch a marathon of The Muppet Show (hello, Miss Piggy), or you could watch Charlotte’s Web followed by Babe, then read Three Little Pigs before bed.

Or, you could dress up like a pig. The choice is yours.

However you celebrate, I hope that you have a great National Pig Day. Nice that it falls on a Friday this year, too, isn’t it? You gotta love those long holiday weekends. 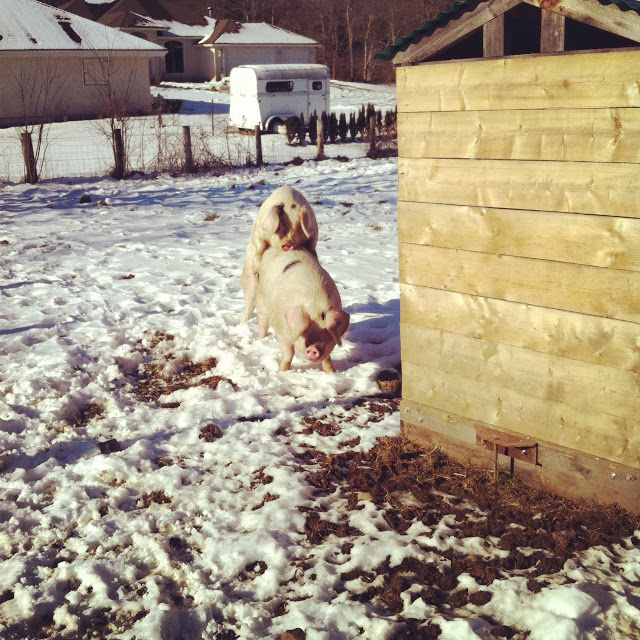 I’m pretty sure that this is how Zeke was hoping to celebrate. Not certain how Rebecca feels about that, though.