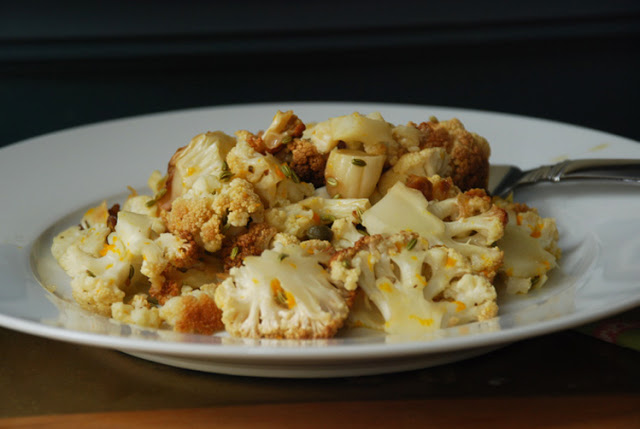 I do have a tendency to obsess about certain foods during certain seasons – asparagus now, tomatoes in August, pumpkin in October – though roasted cauliflower seems to be more of a year-round obsession. It’s just that it’s so easy to prepare, and can be treated so many different ways: served with grated Pecorino Romano cheese, mashed and served in place of potatoes, and this way, this way that I have been eating for workday lunch – I’m almost embarrassed to admit it – every Monday through Friday for, yeah, about three months.

That qualifies as an obsession, right?
The cauliflower gets roasted while I’m making other food on Sunday, then, if I have time, I add the Sicilian-inspired flavors: orange zest, juice, fennel seeds, capers, and raisins. But if I don’t have time – which loosely translates to feeling a bit lazy – I work the Sicilian accoutrement magic while making my coffee on Monday morning, and viola! Easy, inexpensive lunch. 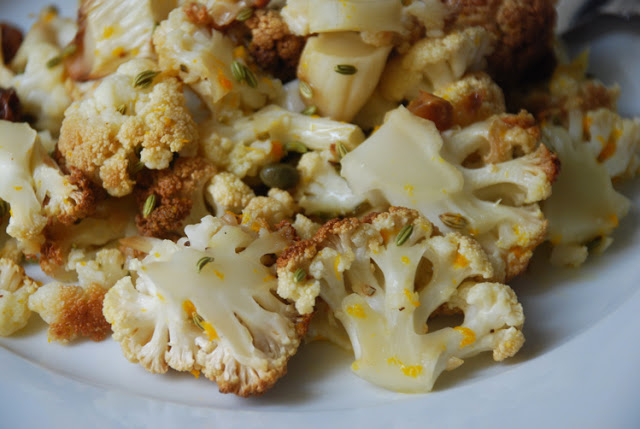 Estimated cost for one batch of Sicilian-style Roasted Cauliflower with Orange, Fennel Seed, and Raisins: $6.83. The cauliflower costs $3.99 per head. Olive oil (Whole Foods Market 365 store brand Spanish evoo) costs 9¢ per tablespoon, so 18¢. Two tablespoons of fennel seed costs around 90¢, 1 tablespoon raisins costs around 21¢, and 1 tablespoon capers costs around 30¢. The navel orange should cost around $1.25, and salt and pepper are pantry staples, and therefore not included in the pricing.

If you’re in Boston tomorrow and headed to WBOS’ EarthFest, come see me in the Whole Foods Live Tent where I’ll be doing a demo showing how to prepare the Sicilian-style Roasted Cauliflower with Orange, Fennel Seed, and Raisins, and generally talking up a storm while doing so. I’d love to see you there!