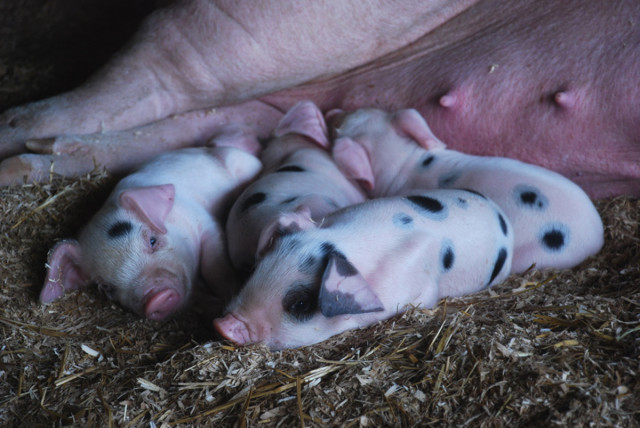 Starting a pig farm is an awful lot like starting a family, only, you know, with less concern with affection between the partners. Though I do think that Zeke is rather smitten with Prudence and Rebecca, they’re a little less enthusiastic about him. He’s a pain in the arse at bedtime, he doesn’t know when to just be quiet and nap, and, in general doesn’t pick up on the social cues that the ladies like silence. He is one chatty hog, that Zeke is.

In the case of our Gloucester Old Spots (GOS) pigs, we bought our gilts (young females) from a farmer in Rhode Island in January of 2012 when they were 10 weeks old. We then undertook the search for a boar, which led us to Zeke in northern Maryland. We collected Zeke one very hot July day when he was 8 weeks old, drove him back to Massachusetts in the back of my SUV (yes, stinky. And noisy. He talked – loudly – through the entire 7-hour drive home.), and waited to start breeding until he reached maturity at 6 months old.

Our search for Zeke was conducted online through the Gloucestershire Old Spots breeders group marketplace. The breeders group maintains a breed registry that assigns a particular color to each lineage. There are four color groups: green, red, black, and blue, which are simply codes for the bloodline, and are not at all related to the color of the swine. I’m sure you realized that there aren’t any green pigs out there in real life, but just in case. Plus, this is a bit technical, which may be more than you bargained for when you first saw an adorable piglet photo and chose to read on.

Prudence and Rebecca are green group, so we needed to locate a boar in either the blue, black, or red groups, as breeding outside of your sows’ color group is recommended in order to avoid a high coefficient of inbreeding (also known as “CI”, the percentage by which each animal is inbred within its lineage ). The black group is more highly recommended for breeding with green group sows, but black group pigs tend to be in areas quite far away from Massachusetts, and we wanted to be able to drive to pick up our new sire. Zeke was blue group, and only a day’s drive away.

A few weeks after we got Zeke home, we received his breed registration papers, which showed that he is more closely related to the girls that we might have liked – they share great grandparents, which probably should be expected, given that 20 breeding stock were imported into the U.S. in 1999 to get the breed reestablished here, so not a large gene pool to start – and his coefficient of inbreeding was also a little higher than we wanted.

No matter, the breed association recommends breeding GOS pigs as far apart in relation as possible: No brother-sister breeding, and no father-daughter/mother-son breeding, and with Zeke, Rebecca, and Prudence, we’re in the clear here. They are relatively distant cousins, not direct relations.

After one failed mating attempt (Zeke tried the side mount to start. He was just a little excited – and confused – but eventually he sorted it all out), he and Rebecca had breeding success. 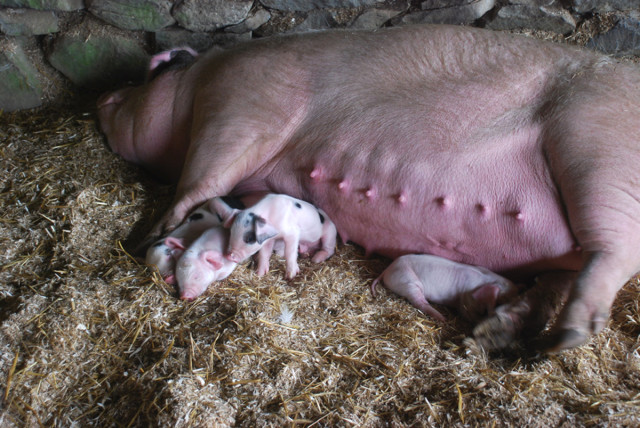 On June 14th, Rebecca gave birth to this litter. There were six total piglets, though 2 were stillborn, and one has an issue with one of his hind legs (which we’ll get into in more detail later), so we are raising 4 pigs for market. We’re not certain if the stillbirths and the leg deformity are a result of too high a coefficient of inbreeding, or if it’s the result of two young swine mating – first litters for sows are usually smaller than subsequent litters, and it was Zeke’s first “service” (as it’s called) – so watching Prudence’s litter, which is due at the end of November, and Rebecca’s next litter due in early 2014, will be key to determining what our issues are, and how to fix them.

Finding the balance of genetic diversity and breeding stock availability is, we’re learning, a challenge for many who raise heritage breed pigs, and as we work on the growth of our herd, we’ll determine whether Zeke is the best suitor for Prudence and Rebecca, or if the health of our herd requires expanding the gene pool, introducing a new boar for the girls, or a new sow (or two) for Zeke, or both. 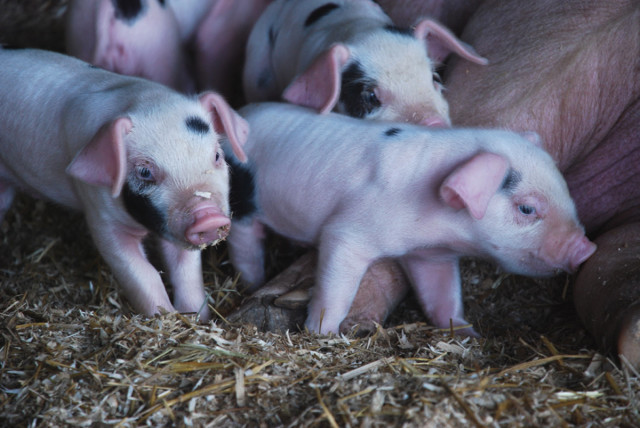