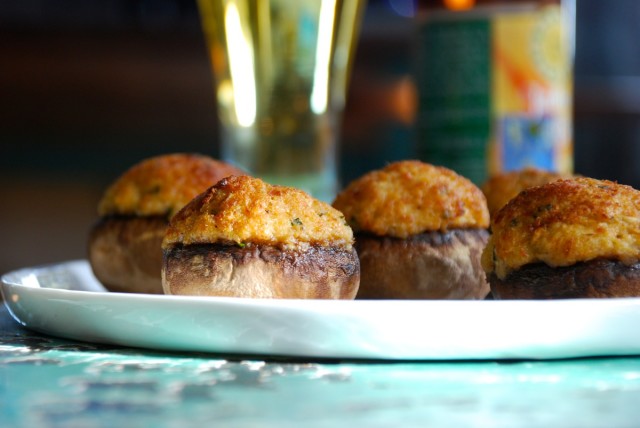 Sure, nachos and chili can be made vegetarian, but how often does that happen for Super Bowl? Not often, at least not in my Super Bowl party attendee experience (we never host. Never. No one seems to like watching tv in our tiny little living room. So strange. But come fire pit season, look out. That’s our time to shine.).

With main dishes so meaty, you might think that game day appetizers would err on the side of the healthful vegetable, but no. They still seem to lean toward the carnivorous – not that there’s anything wrong with that – but it can be a bit of a drag for our vegetarian friends who are relegated to noshing upon cheese and crudité, or the occasional deviled egg, while we all chow down on warm, substantial fare.

And, you know, every once in a while, even we omnivores want more vegetables. Even if the motivation is to leave more room for meatballs.

Eschew the sausage, and even the crabmeat, and try these cauliflower stuffed mushrooms instead. Having them on your smorgasbord offers a bit more variety for the non-meat eaters, and the nuttiness of the roasted cauliflower combined with the cheese makes these hearty, yet not like the lead sinkers we’re used to (or is that just me? Don’t get me wrong, I like sausage-stuffed mushrooms, and I’ll definitely eat more than one, but afterwards, well, I tend to feel a little like a sunken anchor.).

As an added bonus, they’re gluten-free, so viola! Nearly everyone can partake (with the exception of vegans, as my vegan sister noted with a groan when I confirmed the inclusion of dairy in the ‘shrooms – however, substitute vegan cheese, and off you go!). 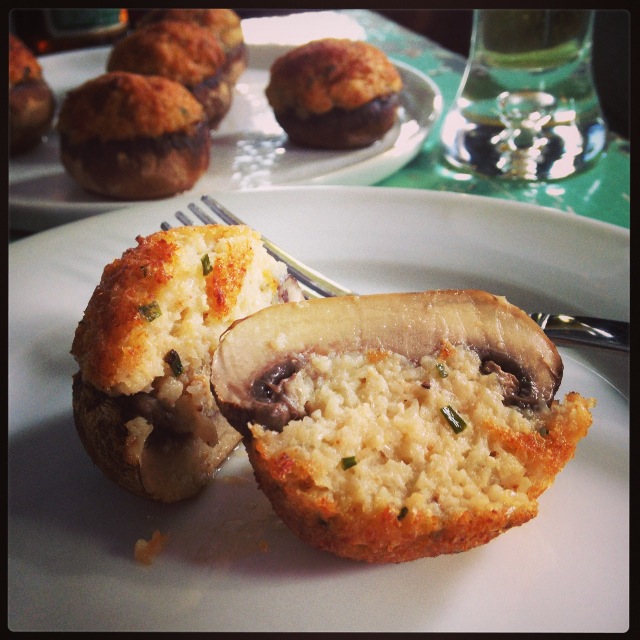 So after all this meatless hype, you know, if you wanted to add a little crumbled bacon, it wouldn’t be a bad thing. Or, you could spice these up with a pinch of crushed red pepper flakes. Or add crumbled blue cheese to the stuffing.

You can also substitute Greek yogurt for the crème fraiche (or low-fat Greek yogurt to keep the calorie count down).

These are also very good the day after they’re made, so don’t shy away from reheating leftovers.

2 Comments to Vegetarian Stuffed Mushrooms with Roasted Cauliflower and Chives