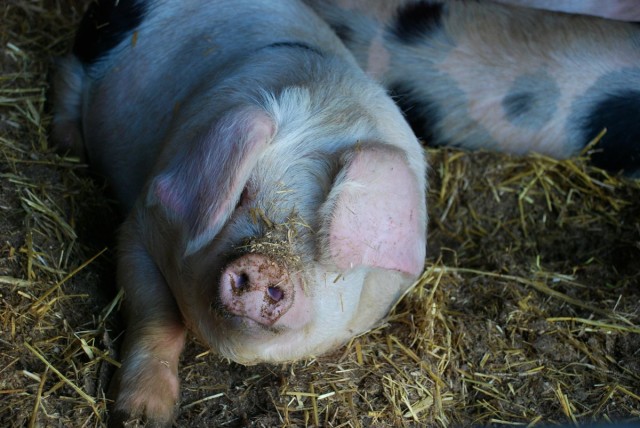 Fair warning for those of you who prefer not to read about animals that end up on our plates. You’ll want to skip this one.

Also, pig farmers or other livestock farmers who have no patience for those just starting out who may still be too soft (this may or may not be me), you’ll want to pass on this one, too.

Here’s a helpful hint if you’re starting out pig farming and happen to have a runty pig in the first litter you’ll be “sending to market” (euphemism alert: that means “having them slaughtered”): Do not, under any circumstance, read Charlotte’s Web.

In the late autumn, while considering the fate of my favorite young pig, Mr. S.P. Burrows, I made the mistake of doing just that.

For those of you who haven’t read Charlotte’s Web in a while, it begins with Fern Arable’s father, John, grabbing an axe and heading for the pig sty. Mrs. Arable explains to Fern that there’s a runt in the litter, and better to kill him now than to raise him up, as runts will only be trouble.

So if you are the same beginning pig farmer with a runty piglet named Mr. Burrows, and who also did not heed the no-Charlotte’s Web warning, reading this opening passage may result in tears. In public. On the train, let’s say. And it may also result in the involuntary shouting of “Some pig!” each time your spouse broaches the topic of your runty pig’s ultimate end.

Of course, Fern rescues the wee pig, Wilbur, only to abandon him for the attention of a boy (can we not share affection between the two? And who is this Henry Fussy character anyway? He seems not nearly as interesting as Wilbur.), though our hero Wilbur goes on to live a long, happy life, thanks to the devotion of his friend Charlotte the Spider.

Sadly, I had no leads on well-read spiders with hand-lettering skills, so the outcome for Mr. Burrows was all but guaranteed not to end nearly as well as it did for Wilbur.

And Mr. Burrows’ troubles had been numerous, starting, of course, with his diminutive size at birth. His siblings were significantly larger than he, his size deficit was compounded by a deformed rear leg. JR felt just as John Arable did, that we should put him out of his misery, though I protested, and within a few days of his birth, he was stronger and, relatively speaking, thriving. While I didn’t hand-feed Mr. Burrows from a bottle or keep him in the house, I did feel connected to the little pig.

Despite his size and leg issues, Mr. Burrows seemed to get along just fine with his brother and sisters, up until his castration. In the event that you just gasped, this is pretty standard practice. Male pigs that are being raised for meat are castrated shortly after birth to prevent what is known as “boar taint”, an off-taste in their meat if they are left intact.

Mr. Burrows’ castration wound didn’t heal well, and to prevent his siblings from cannibalizing him, we separated him from them, a move which ultimately led to preferential treatment. By me. JR still treated them all the same, while I doted upon him, feeding him the best of the vegetable and fruit scraps, scratching his back and behind his ears, and generally chatting it up with him.

Because of his smaller size, he was spared going to market in early January with his siblings, and soon after, I offered to buy him from JR to keep him here on the farm.

“You can’t buy every pig you like, you know,” JR said.

“He is a good little pig, but he won’t be able to walk on that leg for much longer.”

“I know,” I paused, and undeterred, quickly concocted a plan, “I could get him wheels. You know, strap-on wheels.”

But JR was right. He had already, and for a long time, chosen to lie down rather than stand when doing tasks that other pigs would stand for, basic tasks like eating, and drinking. Once he grew heavier, he wouldn’t be able to support himself on that leg, particularly once he topped out at 700 or more pounds like his father.

And JR was also right: I couldn’t buy each pig that I liked and keep it here indefinitely. That’s not what we’re doing here – this is a pig farm, albeit a small pig farm – it’s not a pig petting zoo. And so it goes. I’ve known from the start that we’re raising pigs for pork, not for pets, yet the novice in me couldn’t help but develop some attachment.

Mr. Burrows went to market last week. I said goodbye before he went, and scratched his back and ears one last time. I was sad, definitely sad, but didn’t cry (even though I’d have had the luxury of doing so in my own yard, rather than a crowded train), and the night after he went to slaughter, Mr. Burrows visited me in my sleep.

I dreamt that JR was in my old car, and I opened up the passenger door. Mr. Burrows appeared from nowhere (as pigs in dreams are wont to do), he leapt into the passenger seat, then bounded into the rear seat, hung his head out the window and let me scratch him behind his ear. He flopped his big floppy-eared head around, trying to get a better ear-scratch out of the deal, and even appeared to be smiling at me as JR put the car into gear and drove away.

But then, it was only a dream.

2 Comments to Some Pig