Inside the Garden at La Foce 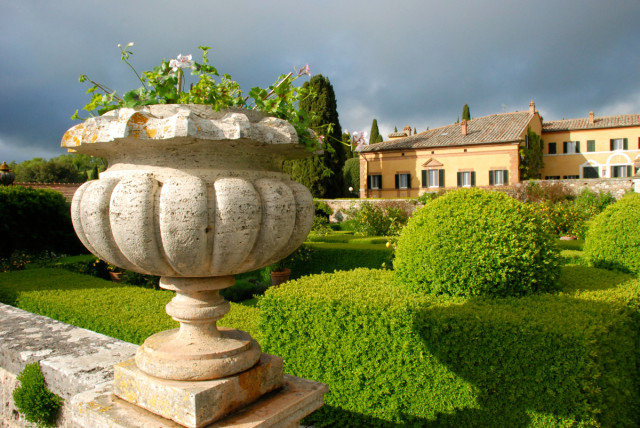 The estate of La Foce has claimed a special place in my heart. I remember, years ago, reading an article about people returning to the same vacation destination year after year, renting the same apartments or houses or going to the same hotels, and I thought, “Who the heck would do that?”

Well, 13 years later, it turns out, I would do that. And so, too, would JR. Lucky for both of us that we agree. 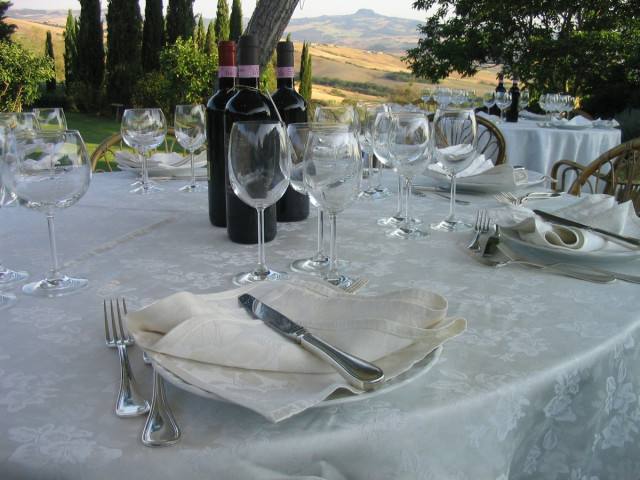 a table at our wedding reception at Chiarentana (photo credit to my brother on this one).

We were married in Montepulciano, and we stayed at Chiarentana (part of the La Foce estate), along with our family and a few friends, where we celebrated our reception. We selected La Foce for our wedding because of the beauty of the landscape. There’s something about looking at a valley of undulating hills, spotting medieval hill towns in the distance, and realizing that the landscape looked much this way at the time that Florence and Siena were at war. It’s a region that is stunning and unspoilt, and one that keeps beckoning us back.

The estate of La Foce was purchased by Antonio and Iris Origo in 1924, and didn’t contain a garden at that time. While the region is stunning, it was also difficult to farm, for there was a dearth of water, the region is quite arid, and the Etruscans had chopped down vast numbers of trees during their settlement of the area, resulting in erosion and the creation of the crete senese, which are clay mounds protruding out of the hillsides.

those gray mounds punctuated by green on the right-hand side of the frame are crete senese hills.

The Origos set about revitalizing the area, constructing a reservoir that exists to this day, restoring the houses of the property, including many of the tenant farmers’ homes, building a school to combat the pervasive illiteracy in the area, and, eventually, constructing a children’s hospital. In the midst of all this, Iris Origo also commissioned Cecil Pinsent to construct a garden that would better frame the view of the existing landscape of the Val d’Orcia. 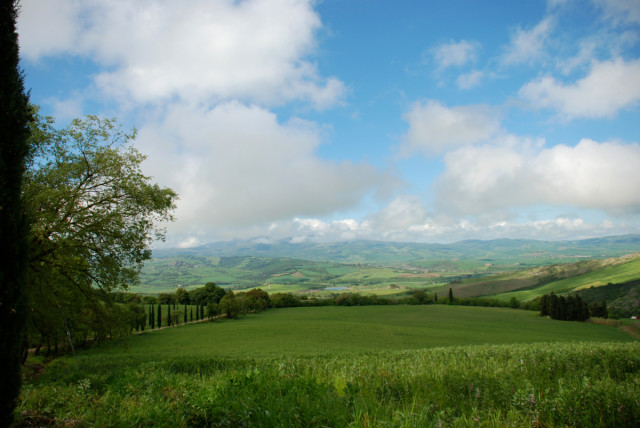 The work on the garden took place in four stages, and, as Sibylla Holtz, our garden tour guide mentioned, Pinsent was not much of a plant man. He was far more a hedge gardener. He also introduced the now-iconic cypress tree to the landscape, as prior to the garden restoration, cypress were associated with churches and cemeteries, and were therefore not embraced for home gardens. Pinsent’s travels on the Grand Tour influenced his designs for the Origo’s garden, and many of the structures he designed, Holtz pointed out, had more of a northern European feel – German and Swiss – than an Italian feel.

This building, however, is the original building on the property, dating from 1498, originally serving as an inn to pilgrims on the Via Francigena on their trek to Rome. 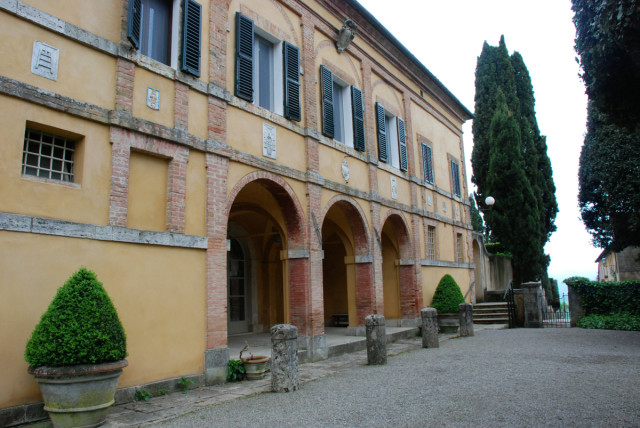 On the day that we toured the garden, it had been cold and cloudy all day. When we first met with Holtz, she asked if we all had umbrellas, in the hope that having them would keep away the rain. As luck would have it, having umbrellas did keep away the rain, and even brought out the sun (it must have been the umbrellas. of course). Lucky for us, for, as Holtz pointed out, to Pinsent, shadows and light were everything, and the hedges, gorgeous as they are, are really meant to be viewed with that famous Tuscan sunlight casting shadows upon them, creating movement, as if in a great, green, tree-lined dance. 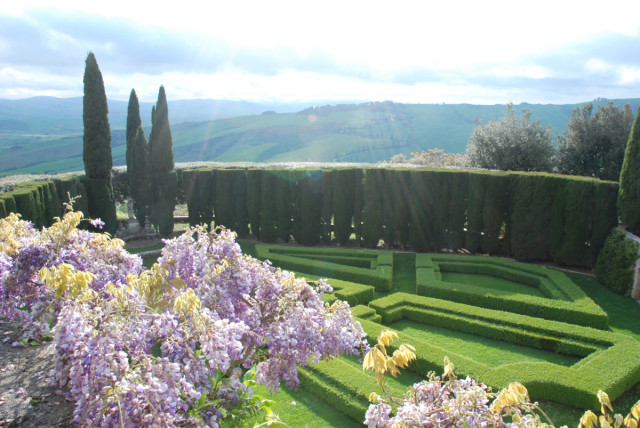 this is the winding, cypress-lined road that appears just beyond the garden hedge in the photo above. 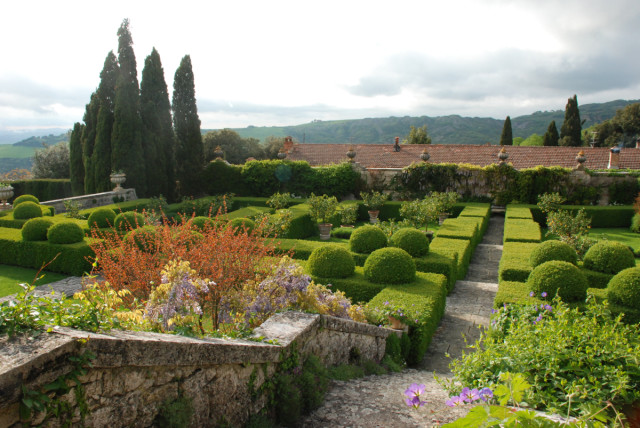 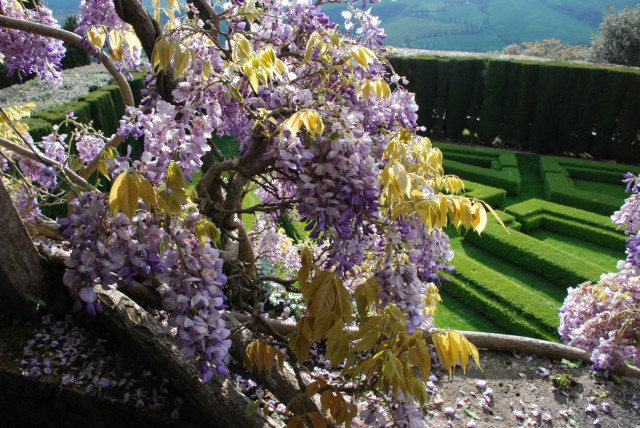 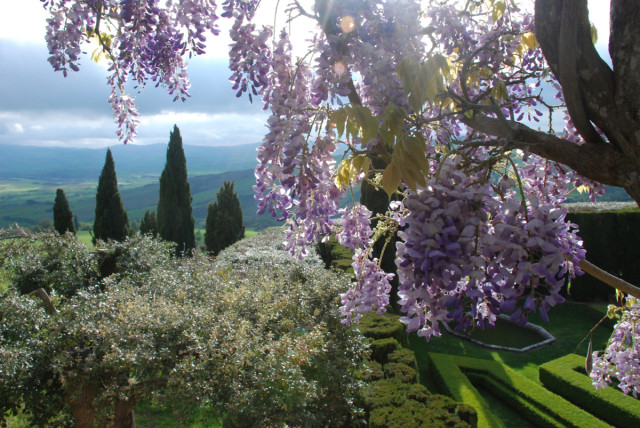 more wisteria. why not?

Garden tours are available at La Foce from mid-March to early November on Wednesdays, weekends, and Italian national holidays. A complete schedule and details can be found here.

For more information on La Foce and the garden, the New York Times just ran an article on the estate here.

Benedetta Origo, one of the daughters of Antonio and Iris Origo, has written a book about the garden, La Foce: A Garden and Landscape in Tuscany that is available on Amazon.

If you’re traveling to the Val d’Orcia in southeastern Tuscany and would like a tour guide to fill you in on the history of the area, including options to learn about Medieval churches or the Etruscans, Sibylla Holtz can be reached through the office at La Foce (+39 348 5942001) or via email at seta (dot) si (at) alice (dot) it.