This week in the garden – end of July: tomatoes, eggplant, and blackberries 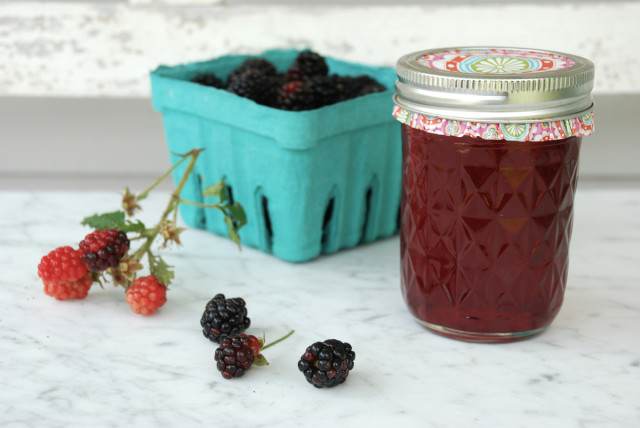 I’ve been a little remiss about garden updates these last few weeks. With family in town from Los Angeles mid-month, followed by an uncontrollable need to get to Block Island (if you know The Block, you understand), we’ve been on the go, and I’ve been keeping my distance from the computer, which isn’t a bad thing to do every so often. 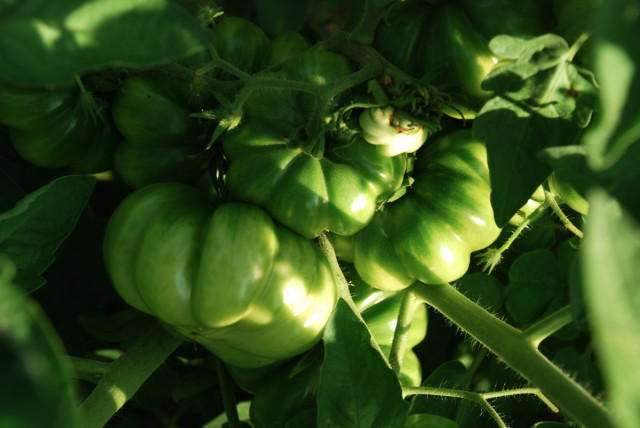 Meanwhile, the garden waits for no one, and we’ve been watching loads of tomatoes hanging on the vine, mostly green, for what feels like weeks, though the cherry tomatoes have just started to ripen, adding much needed color, and, well, tomatoes, to the salad mix with our cucumbers that are going wild. We’ve been tossing the cherry tomatoes with pasta and pesto (made, of course, from my absurd-for-two-people planting of a dozen basil plants – I’m making pesto just about every other day now – can’t let the good stuff go to waste, after all), or grilling them on skewers with zucchini and summer squash. Ahhhh, tomato season. I’m so glad it’s here, aren’t you? I mean, unless you hate tomatoes, I’m assuming you’re also stoked.

Around the beginning of July, our friend Patrick, a former plantsman who owned a nursery on Cape Cod, stopped by and was so, so enthusiastic about his eggplant, he waxed on about it for a few moments, then asked (also very enthusiastically), “Isn’t your eggplant doing grrrreat?”

Well, Tony the Tiger, not so much. “This is my last effing year with eggplant. They never do well here. Last year ever!”

Yes. I yelled. Yelled about eggplant. And I think they heard me, because two days later, our plants were covered in flowers, and now, we’re about to harvest the most eggplant we’ve ever had. That’s in seventeen years, people. Seventeen years. Perseverance, that’s one lesson gardening will teach you.

Or, alternatively, it teaches you to practice exercises in futility until finally one odd year, that one crop you just can’t seem to let go of performs as it should. Let’s not expect this again. At least not for another seventeen years or so. Oh, right. Back to the perseverance mantra. Sure thing. We have to buy in though, because if we don’t, we might just quit. 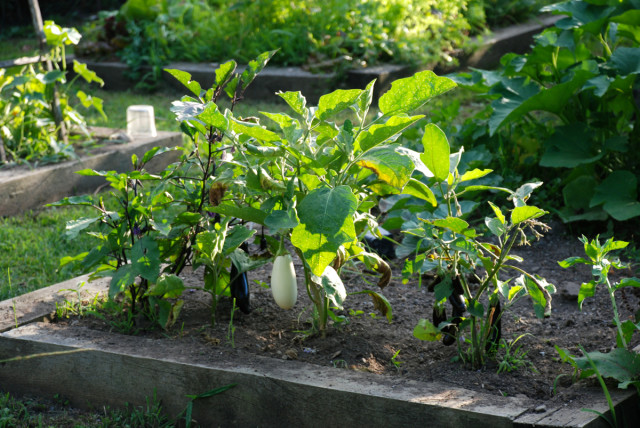 The big news here, though, is the preponderance of blackberries. We are experiencing an absolute glut. The blackberries were planted here before JR bought the house more than 25 years ago. They form a hedgerow alongside the two edges of the garden that abut our neighbors’ hay field, effectively keeping the deer out of our garden. They aren’t pretty, they’re an old variety, so the canes come up everywhere – we just weeded one from one of the tomato beds and another from our new herb bed – and the thorns are good and hefty. JR has, every once in a while, used the brush hog to mow the brambles down (I know, I know. I love that there is a farm implement called a brush hog, too. Oh, you hadn’t heard of the brush hog? Well, handy tool, that hog is – whacks the crap out of brush and levels it to the ground, and it runs off of our old tractor, which makes it even more convenient), but I like having the deer deterrent and the berries, so we’re often in disagreement over the brush hogging. 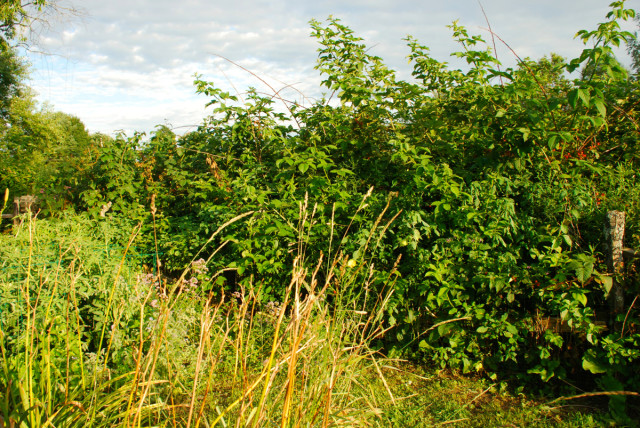 a blackberry hedgerow. Ain’t no deer going through those thorns. Ev-ah.

This year, I, and the fact that our neighbors have installed 6-foot garden fence to protect their harvest from the deer, convinced JR to let the berries stay. Good call. Damned good call. We have more berries – well, almost more berries – than we know what to do with. I’m harvesting a pint a day, with loads of berries still to come. So far, I’ve started blackberry vinegar, which is now aging in the basement (our only cool, dark space), made a batch of blackberry simple syrup (which made the NYT’s Sunday Magazine’s “meh” list – well, all simple syrup did – a few months ago, but I shall protest that. It’s not meh at all, and a good way to use up a glut of berries, or herbs, for that matter), and tomorrow, I’ll be making a blackberry crumble. Then, I think, it’s time to infuse some vodka, make jam, top a pork chop or grilled chicken leg – or a dozen of each – with blackberry sauce, make ice cream, perhaps freeze a few pints of fresh berries, give berries away to family and friends, and perhaps – perhaps – we’ll be able to use them all up. 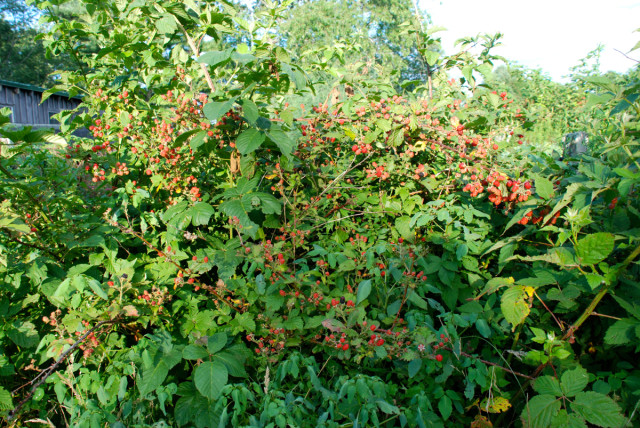 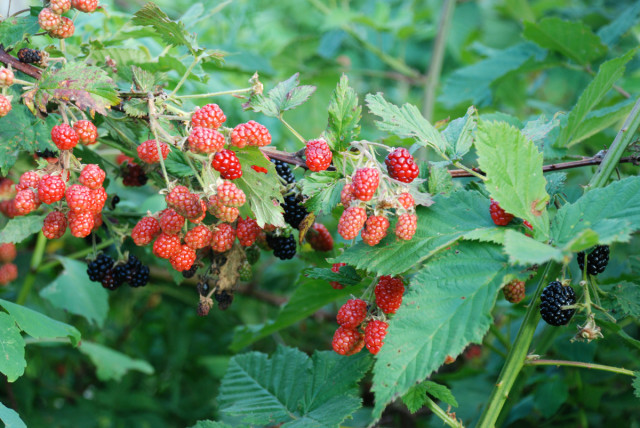 And, while we wait, let’s look at a happy little border of zinnia and not yet flowering sunflowers near the chicken coop. Ah, summer. 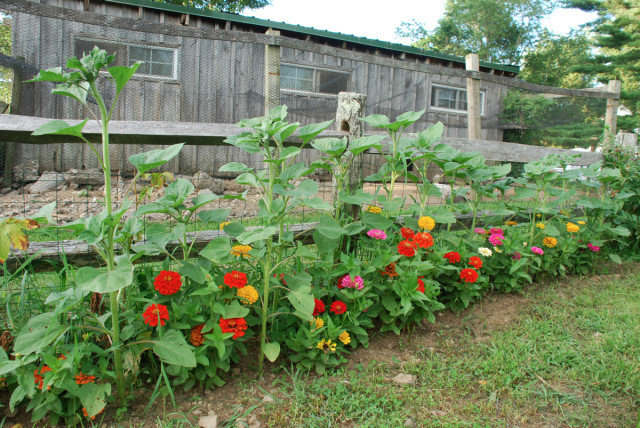 9 Comments to This week in the garden – end of July: tomatoes, eggplant, and blackberries