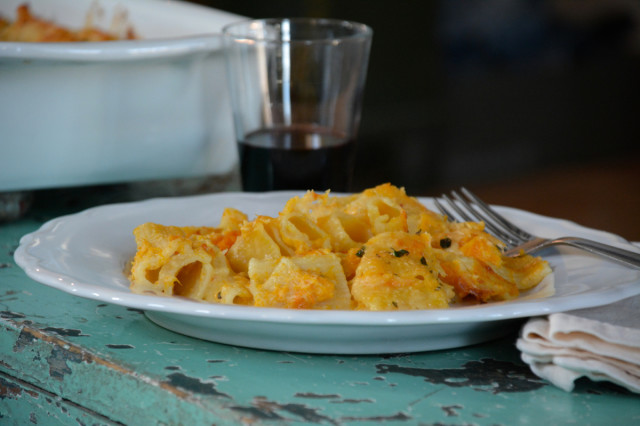 On a rainy, rainy night the first week in December, we – and by “we”, I mean JR, me, and 10 others – first sampled the dish that would inspire this one. Ooohs and ahhhhs ensued as the dish was passed around the table, just one bite for each of us, then back to the lucky woman who had actually had the brains to order it.

We – all 12 of us – were at Al Forno in Providence for a birthday celebration, and the other Amy at the table – the smart one – scored the winning dish of the evening, called (something along the lines of) Pasta with Pumpkin and Four Cheeses.

If you’ve been to Al Forno, you know that they are famous for their wood-grilled pizzas, their made-to-order desserts (please place your dessert order while ordering your dinner to insure that dessert is ready by the end of your meal), and their pasta with four cheeses. This pumpkin version was a stellar late fall take, uber-rich and decadent, with pancetta crumbles and pockets of gooey ricotta packed in among the pasta and pumpkin – and, of course, there were those other three cheeses.

At home, my first attempt was an abject failure. I hadn’t roasted the squash nearly long enough, my cubes remained cubes, when what was really required was mash, and that alone was enough to ruin the appeal of the dish.

The second go was an improvement, the butternut squash roasted for nearly an hour until it was dark golden brown at the edges, practically mashing itself as it was removed from the roasting pan. And that second try at Al Forno’s mac and cheese was rich. Possibly too rich for at-home dining (could there be such a thing? Well, if you happen to have your cholesterol checked on the Monday after New Year’s, the answer, my friend, is “yes”. Settle down on the bacon and pork products, already. That was the message – implicit – from my doctor, whether she realized it or not, though I did decide that the occasional Béchamel sauce and giant load of cheese is still (somewhat) passable on my quest to reduce my cholesterol – so long as I don’t have mac and cheese all the time. Right? Right.).

This version emerged as the winner. No bacon, no pancetta. No pork products! No ricotta either. Only one cheese. And that’s okay. It’s a tasty cheese, after all, that cheddar is.

However, if you’d like to use multiple cheeses, and add a bit of bacon, you go right ahead. Just be sure to schedule that routine blood work of yours for sometime toward the end of September, when you’ve been eating nearly nothing but garden tomatoes and whole grain salads for a couple of months. That’s definitely the time for one’s blood work (I for one, look forward to my re-testing later this year, definitely during harvest season).

But now? Now it’s winter. It’s time for some decadent (but not too decadent) comfort food. Behold, Roasted Butternut Squash Mac and Cheese.  Serve it on its own, or with a green salad (arugula anyone?), or as a side to – um, pork chops or spare ribs. Or chicken breast. You could always serve it as a side to chicken breast – nice, lean protein there. 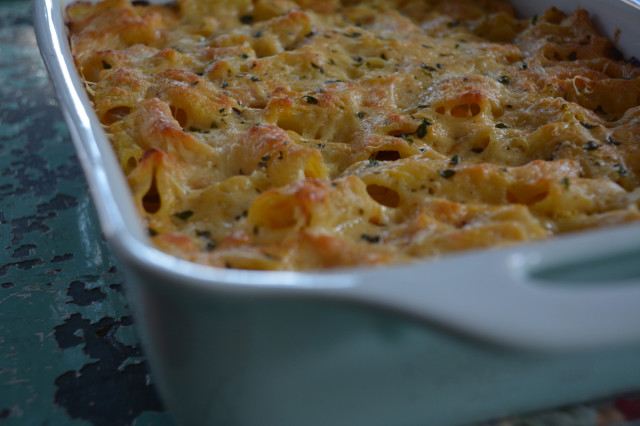 While you can use any tubular or shell-shaped pasta for this dish, my preference is Cavatappi. I used Rigatoni in the photos here, but only because we were snowed in, and that whole milk that I had purchased over a week ago was in need of use, stat.

With that said about the Cavatappi, if you can get your hands on Afeltra Tortiglioni (Afeltra is the maker, Tortiglioni is the pasta type), by all means, use it instead. We recently brought a bag home from Eataly, and it is fantastic – if you like super al dente pasta. Which we do.

If your Béchamel cooking pot is large enough to accommodate the mixing of one pound of pasta into the sauce, you can mix them together in the saucepan (once the sauce is finished, of course), eliminating additional bowl clean up.

You can also make the entire mac and cheese up through the point of topping with cheese and thyme, then cover and refrigerate it until you’re ready to bake it – say, the next day – just bear in mind that a cold-from-the-refrigerator mac and cheese will take a little longer than 30 to 35 minutes to reach golden-brown-cheese-and-bubbling-sauce status. 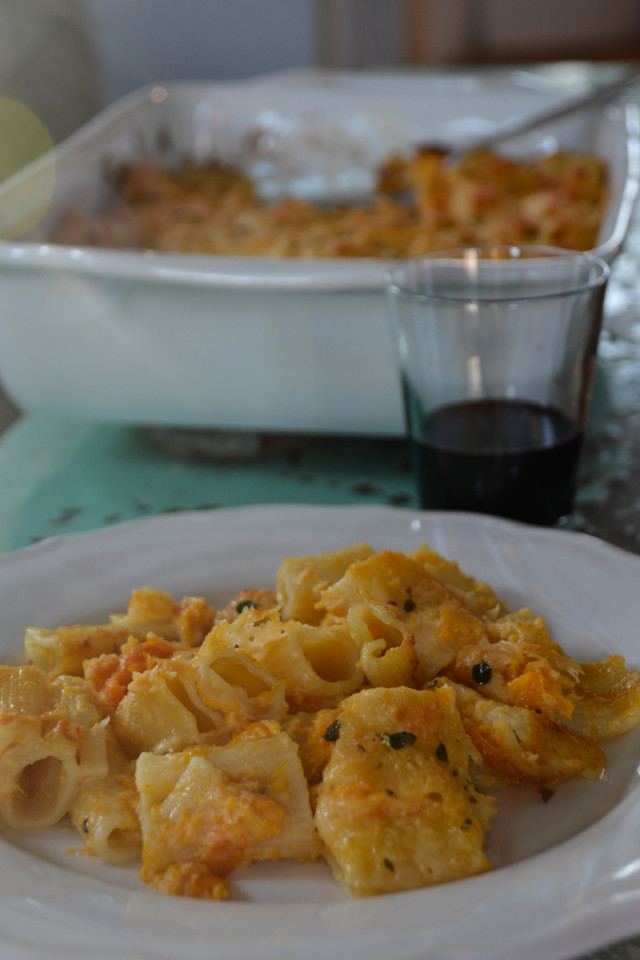 Side note: my cholesterol isn’t that unruly if you’re concerned. Just up a few ticks from 2014’s results. Sure to be under control in no time – now that I’m off of bacon for a bit. And now that the holiday sweets and treats binge is over. Notwithstanding the current mac and cheese binge, of course. 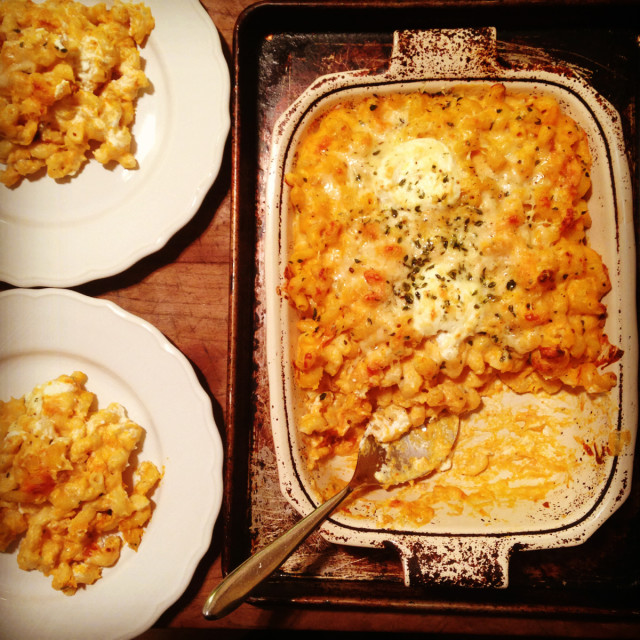