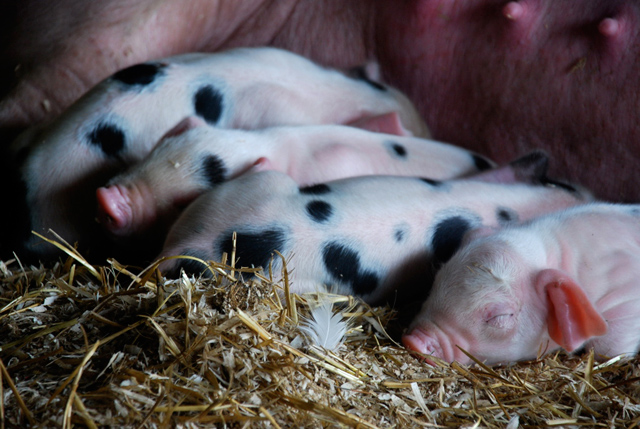 They are white pigs with black spots, and floppy ears that obscure their white-eyelashed eyes. They are thought to be a cross between Berkshire and Gloucester pigs, originating in Berkeley Vale, Gloucestershire, an area approximately 2 ½ hours west of London.

The area of Gloucestershire was known for cheese production and a profusion of apple orchards, the by-products of which – whey and fallen fruit – formed the basis of the GOS diet. Folklore stated that the spots of the Gloucestershire Old Spots were marks made by falling apples, and the pigs were often referred to as “orchard pigs”.

The Livestock Conservancy lists Gloucestershire Old Spots as “critical” on their list of endangered breeds, meaning that there are fewer than 200 annual registrations of the breed in the United States, and fewer than 2000 registered animals worldwide.

In the United Kingdom, Gloucestershire Old Spots (GOS) had dwindled in popularity from the end of World War II on, nearly becoming extinct in the 1960s.

Likewise, the breed was nearly extinct in the United States as well. Despite two importations of GOS pigs to the United States, one before World War I, and the other in the 1950’s, by 1995 only 4 registered GOS pigs remained in North America.

At that time, Robyn Metcalfe, the original founder of the United States’ Gloucestershire Old Spots Association, and owner of Kelmscott Rare Breeds Foundation in Maine, worked with U.K. breeders to come up with a plan to reintroduce the breed to the United States. The full account from the GOS Pig Breeder’s Club in the U.K. is worth reading, as quite a bit of effort in selection, veterinary testing, and quarantine was involved.

In 1996, after a U.K. to New York flight on British Airways and a few months in quarantine in New York, 20 GOS piglets were delivered to Kelmscott, then distributed to interested breeders. Even still, in 2009, there were fewer than 200 breeding animals in the U.S. and fewer than 1000 in the U.K.

The meat of the Gloucestershire Old Spots is superior to that of commercially-raised meat from more common breeds, even earning the first-ever Traditional Specialty Guaranteed designation for swine of any breed from the EU Commission, which is akin to designations for Champagne and Parmigiano-Reggiano that guarantee their provenance and quality. Of course, you’ll need to purchase from a TSG-certified breeder – in the U.K. – to enjoy the pork with that designation, though most GOS breeders here in the U.S. are committed to traditional farming methods as well.

As such, we raise our GOS pigs on pasture, with lower protein grain provided (14% protein) to allow slower growth of the pigs, as opposed to higher-protein grain (18-22%) that accelerates the growth of pigs and brings them to market more quickly, as in commercial pig farming.

On average, GOS pigs require 6 months to reach a market weight of 260 to 280 pounds.  This slow rate of growth for GOS pigs allows for a thicker development of backfat than in commercially raised swine. Both the thicker layer of backfat and the longer period of time to reach market weight contribute to more succulent, flavorful pork.