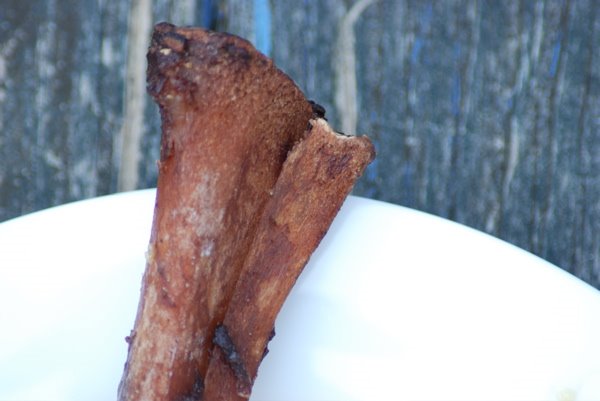 Apologies to those who are put off by the sight of cooked bones. I should have made three lamb shanks last night, but we really are on a budget, so, though I’m certain JR would have been thrilled with an extra shank, I have only picked over bones with which to illustrate today’s post.

The Sunday meal is a big event in our house each week, particularly during the winter. It is the big fancy meal of the week and requires the most effort. Even in the summer, it’s the day that we splurge and buy steaks – well, last summer anyway. We’ll see what happens to those steaks during summer ’09. Cue the violin player. I’m sure we’ll find a way to afford steak during the summer even in this god forsaken recession.

Once the days grow shorter and the weather pushes us indoors earlier, JR and I both crave slow cooked meals. In the past, that could mean anything from Osso Buco (braised veal shanks) to standing rib roast to homemade pasta and Bolognese sauce. The Bolgonese sauce received an invitation to stick around during the recession, but, for better or worse, the Osso Buco and standing rib roast don’t get to grace our dining table any longer. For the time being, at least. However, there are plenty of so-called lesser cuts of meat that are just as flavorful, allow you to enjoy the smell of slow-cooked provisions lilting through the house, and won’t cause you to eat pasta with butter all week long because you decimated your food budget on Sunday. I had been eyeballing the lamb shanks at Whole Foods for a couple of weeks now, even having a conversation with my favorite butcher there about them last week (“How will you cook them?,” he asked me. “I’m going to cook them in red wine and stew ‘em,” I responded, a little skeptical myself having never cooked lamb shank before.). This Sunday, I finally pulled the trigger and purchased two very healthy-sized shanks. They cost $5.99 per pound at Whole Foods for bone-in New Zealand lamb shanks. My favorite butcher informs me that American lamb is priced the same as New Zealand lamb at Whole Foods, so if you have a preference for American lamb, you’re still at the same price point. I checked Peapod.com (Stop&Shop’s delivery service), and they have boneless American lamb shank for $6.99 per pound. I’d wager that in-store, they’re probably a bit less, and if you have a good butcher nearby, you should suss them up for they might have an even better price on the shanks.

I had long been thinking that it would be good to riff off of traditional Mediterranean lamb accompaniments in making my shanks, so I decided that I would use dried figs and raisins in the sauce, and then contrast the sweetness with goat cheese and toasted pine nuts. At the last minute, I decided that some orange flavor would be a welcome addition, and I have about 100 clementines in my house (they’re on sale), so I added two to the mix. I read a little bit about lamb shanks before embarking upon my stewing of the jaspers, and then jumped right in. This being the day after I made them, my final analysis of the dish is that I would eat this every night if I could. With Bolognese and apple cake on the side. You know, if I were committing to eating just one or two or three things every night for the rest of my life. Also, could I get some cheese with that? Cheese should definitely come along to the island of favorite things.

The sauce is a little bit sweet, so if you don’t share my unabashed love for sweet and savory combinations you can counter that with additional goat cheese crumbled over the top of the dish, or you could spoon less sauce on your plate, or you could use toasted walnuts in place of the toasted pine nuts, or you could omit the honey. You could also use different fruits in the sauce. I think dried apricots would be pretty amazing, as would my darling prunes (and yes, I know I still owe you the pasta with ricotta and prunes recipe – I haven’t forgotten). I served this with goat cheese risotto – I’ll post that recipe tomorrow – and balsamic caramelized cippolini onions. This dish is holiday- or guest-worthy, or just Sunday-is-a-good-day-for-cooking-worthy. 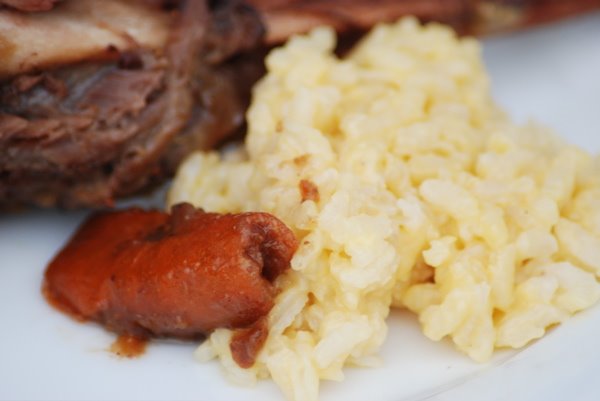 this is a bit neater a presentation than the dish actually appears with more sauce served in your home. I took some liberties here in reducing the dish down to just a few components so it would make a prettier picture. Please forgive me. Make the lamb, and all will be good. 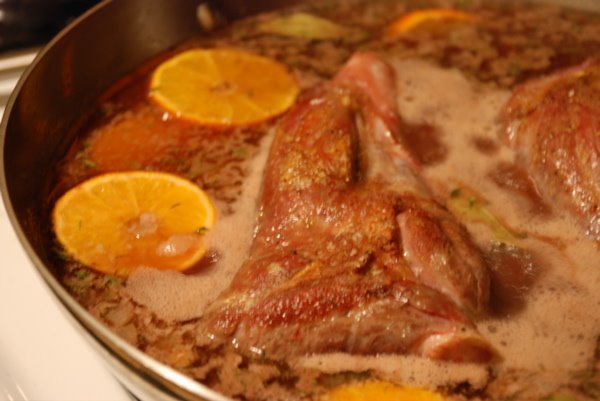 for the sake of practical education, this is what the shanks look like in the braiser pan in my poorly-lit 9-foot-by-9-foot kitchen just before the lid goes on & they cook for 2 hours.

Dinner tonight: We have leftover sauce from the lamb shanks and left over risotto, so I bought a cheap-ass chicken at my local poultry farm today, and I am going to roast some Brussels sprouts to go with the dish. Estimated cost for two: $10.32, but this includes what will be leftover chicken that will either go into a pasta dish later this week or will be chicken salad for JR’s lunches. Maybe we should call it $8.04 for two. The chicken was actually pretty large for the poultry farm – this one cost $4.57 and was 3.28 pounds. We’ll use half of that. You might have read me mentioning chicken salad or pasta later this week. That’s what we’ll do with the other half of the bird. The Brussels sprouts were $1.81. The oil I’ll use to roast the sprouts is 20-cents. The leftover risotto is a bit expensive, but it was part of the special Sunday dinner, and was a test-drive for the holidays, so there we are. We have to have these small luxuries, don’t we? The carnaroli rice was $5.49 for what is the rough equivalent of 16 servings at my house. So the rice for the risotto is 68-cents for two. I used 6 cups of stock in total for the risotto, so at $2.19 for 4 cups of Whole Foods store brand stock, that’s $1.40 for tonight’s portion of risotto. I actually used turkey stock I made from the turkey-in-a-hole-in-the-ground carcass, so if you’re making turkey for the holidays, keep the carcass, break it up into manageable pieces, and follow the stock recipe for the chicken soup, but with enough water to cover the turkey carcass (32 ounces in my case) then just freeze it up for when you need it next. The shallot for the risotto was about 30-cents, and the goat cheese was about $1.35 for the amount we used.