Three-Bean Chili (and nachos, too) 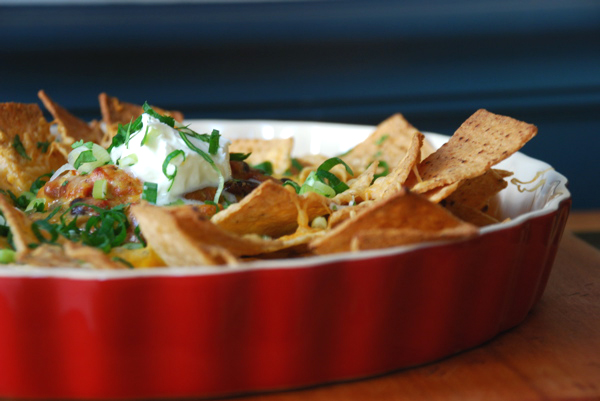 With the Super Bowl quickly approaching, I have a pressing question for you: Do you ever do the menu visualization trick when you’re in a restaurant that isn’t, well, a fine dining establishment?

You know, the dive-y, pubby places where you just know that the kitchen staff cuts the package open, pours it into the Fryolator, and sends it out as your meal? The type of place where one might go to watch a Big Game, but not to have a big culinary experience?

While we’re likely to watch the game at home or at a friend’s house, thus avoiding sports bar or pub food on the big day, I did recently practice The Art of Junk Food Visualization while out for lunch with JR and his brother. It went something like this:

Boneless chicken wings. Pensive look, forefinger and thumb on chin: Now why do they bother to call them wings? Everyone knows that once they’re boneless, they’re called fingers. Do I trust frozen boneless chicken wing-fingers to taste like actual chicken? No. Probably not.

I was becoming agitated, as evidenced by the fidgeting in my chair, plus my eyes had gone all squinty and were darting nervously across the menu. Would I ever find a meal here that passed muster? One by one, little fried food thought bubbles burst, exploded, or simply evaporated. Poof.

This went on for about 20 minutes. My options had dwindled, waitstaff was starting to wonder about the floating bubble remnants near my head, JR and his brother were famished – so was I – and I had to pull the trigger to stop the hunger pangs.

Calamari with hot peppers. Back to the thought bubble: How bad could these be? They’re already breaded, everyone in the known universe of Pubdom is using the same type from the same calamari-in-freezer-bag vendor, right? If nothing else, at least they won’t be flaccid.

If only that were the case.

When I was about two bites into the calamari, JR looked over at me and asked, “Well? How are they?”

I put my napkin up in front of my mouth to prevent the rest of the patrons from reading my lips, and replied in a hoarse whisper, “These are the absolute worst calamari I’ve ever had in my entire life.”

They were flaccid. And mushy. Even the hot peppers lacked crunch.

Calamari porridge. What’s that conjure up in your head? Yeah. Trust me. They were that bad and then some.

Add to that, my junk food craving had not been sated.

The thought bubble reappeared as I drove to the grocery store a few days later: Three-bean chili. On nacho chips. With real cheese. Yum.

It was a done deal. And it’s now been done six weekend days in a row. What? Why are you looking at me like that? It’s football playoff season. It requires game food. Even on the non-game weekend before Super Bowl.

And if we’re going to have game food, let’s make it good game food, shall we? Thankfully, this chili fits the bill.

It’s fab as a stand-alone chili, and when the thought cloud comes out for 3-Bean Chili-topped nachos, nary a nasty thought can be found within the cloud. In fact, I think the bubble is extra-sharp cheddar cheese-lined, which has got to be better than silver lined, right? 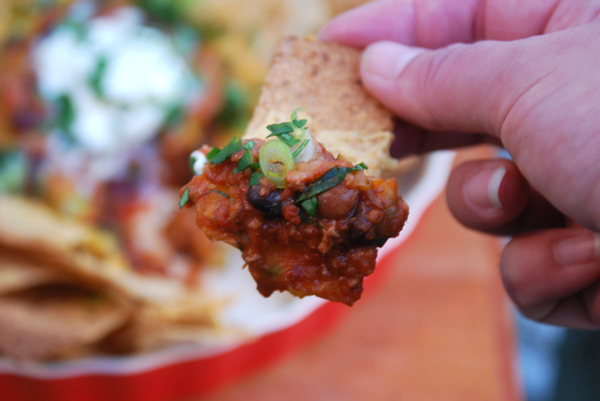 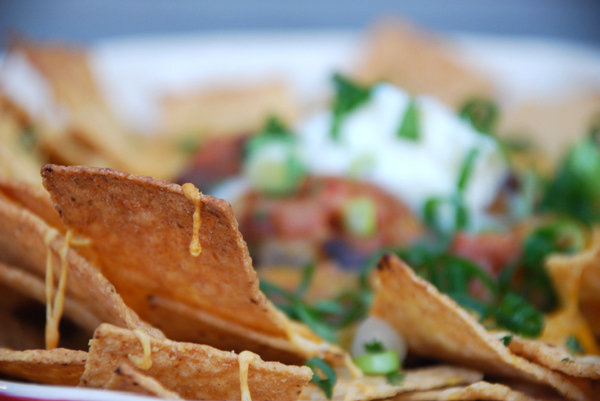 9 Comments to Three-Bean Chili (and nachos, too)