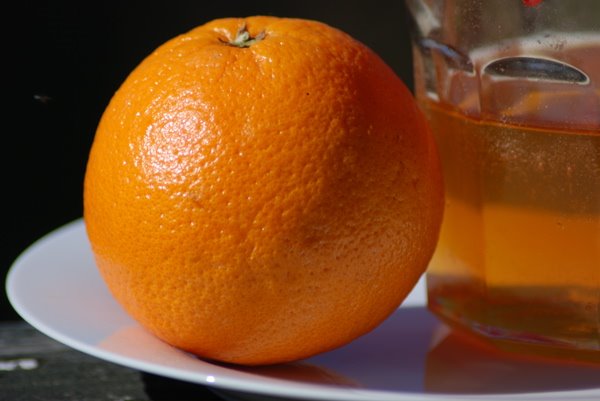 Let’s face it, chicken is good food, but, boy, could it use some sprucing up from time to time. You know, just to keep it, well, interesting. Two nights ago, which now seems like it may as well have been August given the change in temperature between then and today, JR and I grilled chicken and finished it with an orange-honey glaze. It’s a simple thing to make, and elevates the chicken beyond it’s 99-cent a pound status. Which, by the way, isn’t a bad thing – I’m all for 99-cent a pound chicken, but you know what I mean. You can use this glaze on roasted chicken as well, and can mix it up by changing out the rosemary for thyme, or by substituting grated ginger and Thai basil for either rosemary or thyme.

Dinner tonight: pasta fagioli with curly kale and sourdough ciabatta crostini. Estimated cost for two: $2.72 for the soup, and 16-cents per slice of bread. So maybe 64 cents in bread, and a grand total of $3.36. The soup costs $10.86 for 8 hearty servings. The tomatoes were $2.00, the broth $2.19, the beans 99-cents, the pasta $1.17 (and you know you can get small pasta for 99-cents as well, don’t you? I used orzo because it’s what I had on hand and it’s a little more expensive than, say stellette or tubetti. I think you should try racchette if you get a chance, though. Is there an Italian love-bordering-on-obsession with tennis of which I was unaware? I mean, I could see making up nonsense Italian pasta-shape names like macchinette (little cars) or bialettiette (little espresso makers) for pasta shapes, but tennis racquets? I had no idea.). Oh, boy, do I digress. The vegetables – onion, celery, kale, and garlic – were $3.50. I think I’ll share the recipe tomorrow because, if I do say so myself, it rather effectively demonstrates how satisfying tomato soup and bread can be, and without even a bit of that sinking resignation feeling (“oh, has it really come to this? Tomato soup and bread? Sigh.”).

p.s. turns out that macchinette il cafe is Italian for espresso maker. And I just grabbed two things I thought Italians might actually be obsessed with – cars (macchina) and their favorite brand name espresso maker (Bialetti) – to mess around with. Uncanny!