Do it yourself: Turkey-in-a-hole-in-the-ground pictorial essay 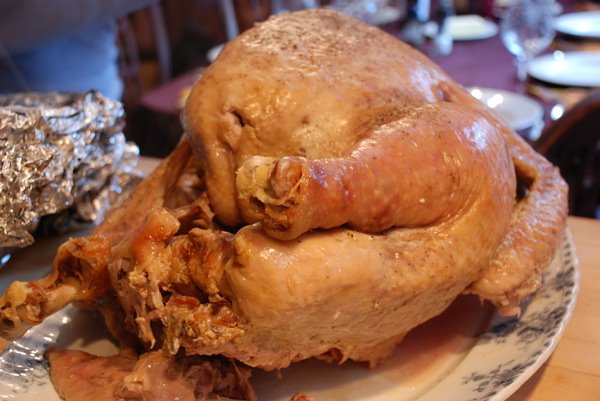 Pictorial essay sounds pretty fancy, doesn’t it? I thought it best to illustrate the entire Turkey-in-a-hole-in-the-ground process with photos for those of you who want to pull these shenanigans off yourself next year. It starts with a large, fresh bird. This year, our bird was 30 pounds. One year we commissioned a bird from my brother-in-law, Trip’s, Vermont neighbor. When Trip arrived to fetch said bird, it weighed over forty pounds. Nonplussed, as he had to pay by the pound, he said to his neighbor, “I only needed a thirty pound turkey.” Her response: “What did you want me to do, tell it to stop growing?” Ahhh, the vagaries of buying local. But doesn’t it just add to the adventure? (the correct answer to this question is “yes”. I wasn’t being rhetorical.) 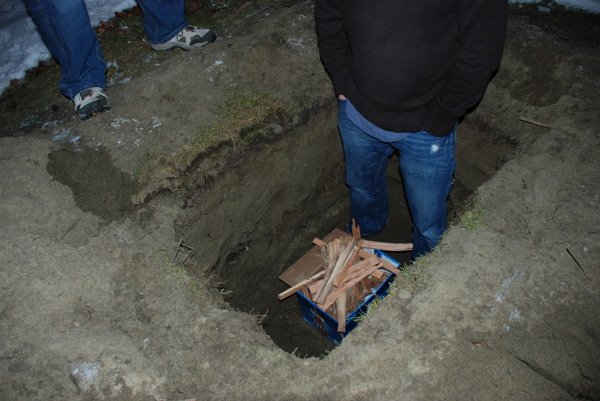 Step 2: A new development this year as a result of nephew-in-law Ian’s now-obvious genius: fill a cardboard box (yeah, so what if ours is a beer box, huh?) with crumpled up newspaper and kindling – like a charcoal grill starter, but you aren’t ever pulling this thing out of the hole in the ground, so you want it all flammable rather than made of sheet metal. 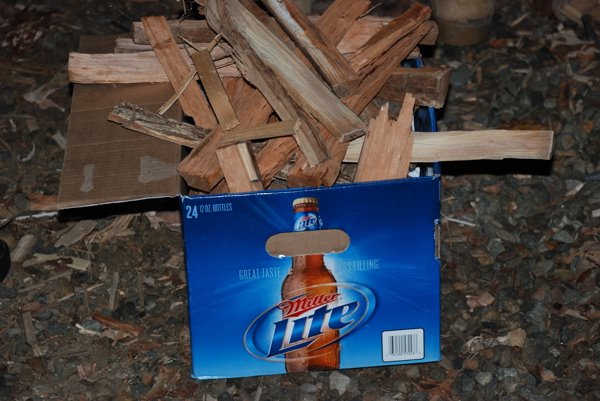 Step 3: Light box o’tinder and quickly get the heck out of the hole. Helpful hint: it’s a good idea to have someone strong there next to the hole who can help you out. This is fire you’re playing with so you need to move more quickly than it. Alternately, you could light multiple fireplace matches and drop them in, or you could use our old, trusty method of balling up newspaper, throwing it into the bottom of the hole, topping that with torn cardboard, then topping that with kindling, and leaning into the hole to light it, which eliminates the need to quickly jump out of the hole. 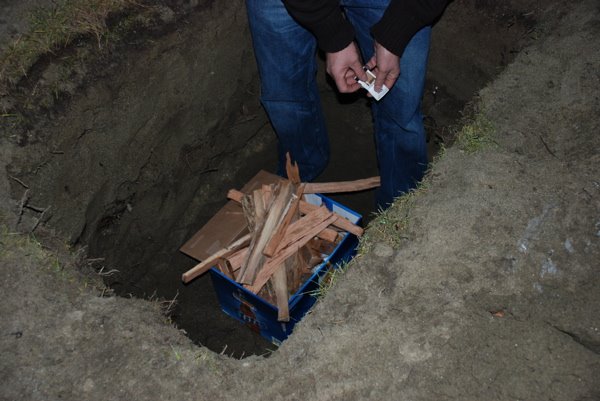 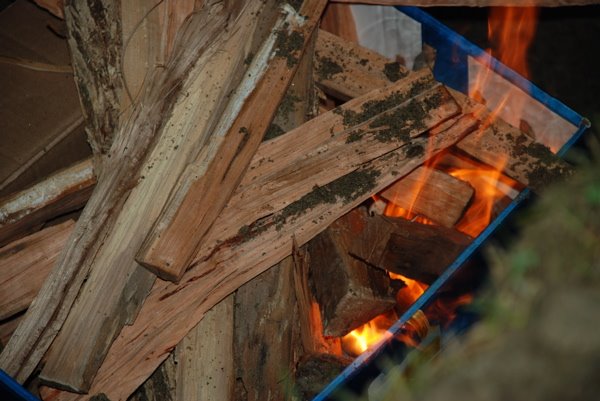 Step 5: Add wood and build up a base of coal slowly. Until two hours into it, when your brother-in-law comes out and wonders why the heck the fire isn’t burning hotter, and informs you that we’re never going to get 18 inches of hot coals before midnight, so step it up, fer cripes sakes! But at the beginning, you can build it up slowly. You have a couple hours before the questioning of your technique and the demands for a hotter fire are spoken. 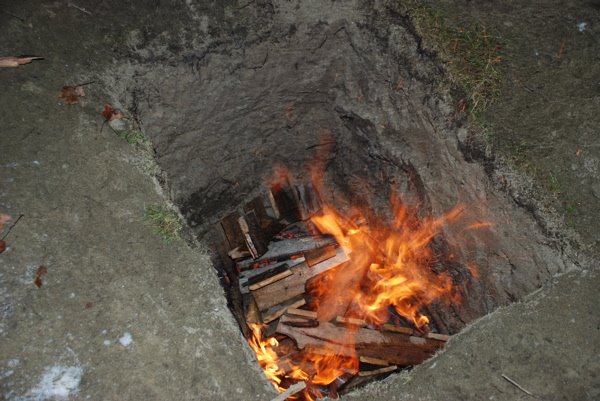 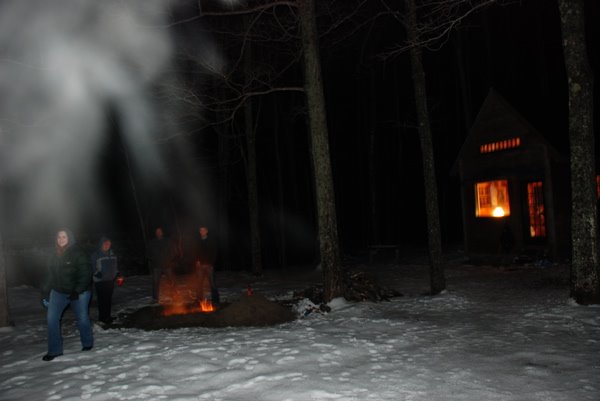 Step 7: Stand around some more. Drink. Feed the fire occasionally. Tell funny stories and catch up with family who you see entirely too infrequently. 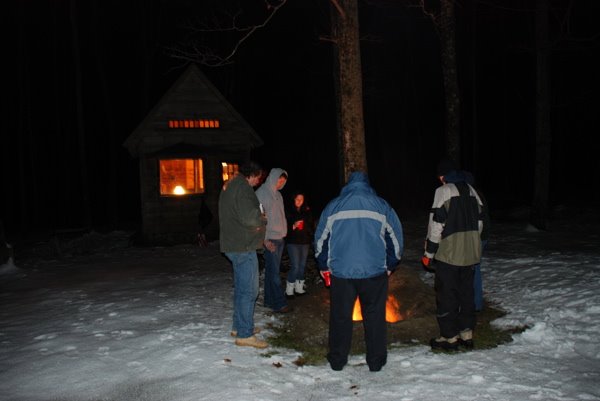 Step 8: Discuss what’s wrong with the fire. Here is a list of options to get you started: 1.) the fire isn’t burning hot enough. We’ll never have enough coals to cook the bird all the way through; 2.) would you just look at the wall caving in over there? The fire is going to be put out for certain – oh god, the bird will never cook through; 3.) Whoa – the fire is burning too hot – those flames are HUGE – the bird is going to burn for certain. I sure do hope we have enough side dishes so we don’t miss the meat tomorrow; 4.) Cripers, there’s a ton of soot in my beer – ugh – my teeth crunch – blahhh! The bird is going to be full of soot if it does cook! 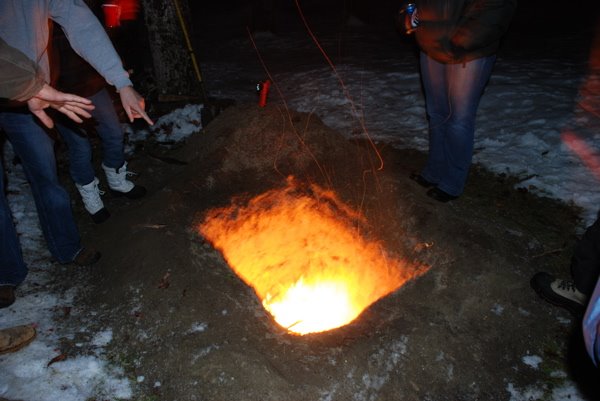 Step 9: Settle down and admire the fire. Try to move out of the path of soot so that your next beer (which happens to be your 8th) has less crunchy texture to it. 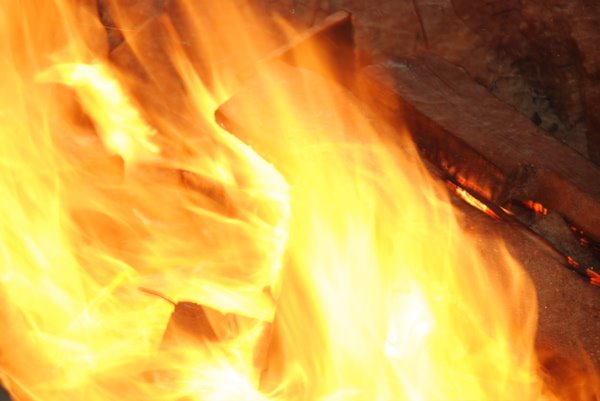 Step 10: Tell everyone you see the face of Mrs. Twitchell, the former owner of your brother-in-law’s house way back in 1805, in the flames. If they don’t believe you, show them a picture. 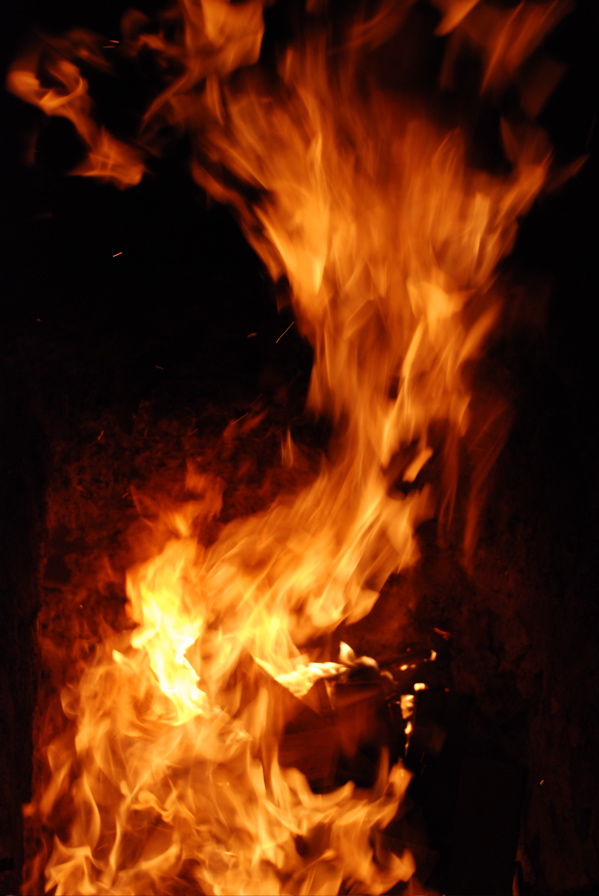 Step 11: Begin to panic that you really won’t have 18-inches of hot coals by midnight, which is what you need in order to sufficiently bury the bird to insure it cooks through, and midnight is the magic hour for the burying, so hurry up and put a lot of wood on the fire. Then admire the fire and continue to drink beer (now you are on your 9th and you aren’t even beginning to consider what this means for you tomorrow). Know that your beer will be crunchy no matter where you stand around the fire. You cannot avoid soot. 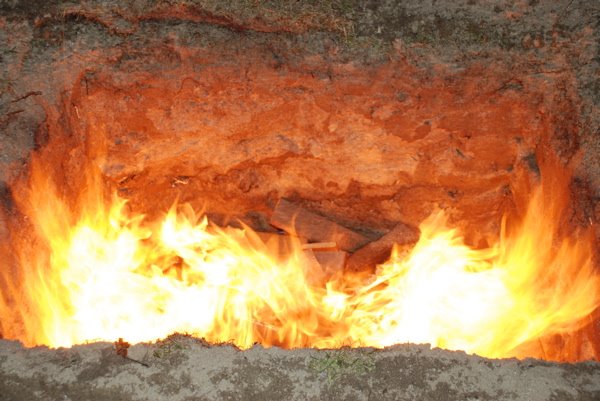 Step 12: Bring the turkey – which sometime around step 2 had its cavity stuffed with a couple pounds of butter and enough ice cubes to fill the cavity, butter was placed under its wings and legs, then it was wrapped in 8 layers of heavy duty aluminum foil, and finally placed in its turkey cooking cage – to the fire. Set it perilously close to the edge of the fire and in a dark spot where no one can see it very clearly. 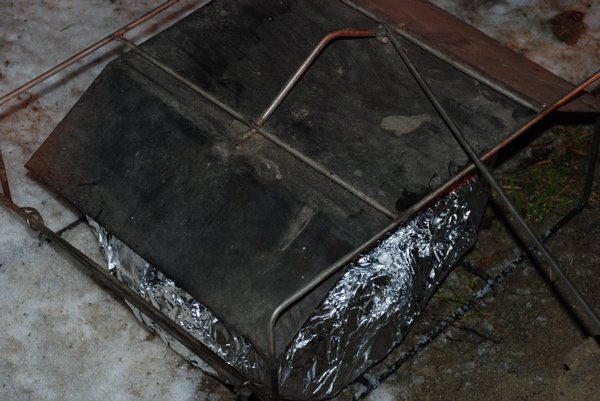 Step 13: Get your foot trapped in the turkey cooking cage on your way back to the studio to graciously get beer for everyone. Watch from the ground while everyone is doubled over in laughter and those who are able to stand upright (while laughing) take pictures of you and your foot in the cage. Eventually remove your foot from your boot in order to let your father remove the darned thing from the cage. Think, “wow, my family are a bunch of jackasses. Good thing I wasn’t hurt – a lot of help they’d be!” 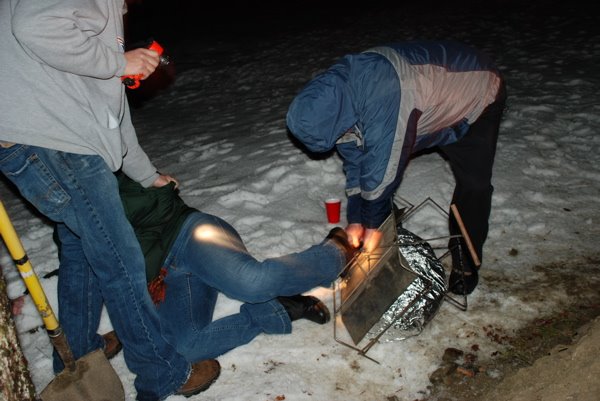 Step 14: By some miracle there actually are 18-inches of hot coals, so you put on your gloves and grab a long-handled non-flammable shovel (meaning no wood handles, people), and move the coals off to the sides of the hole to make room for the turkey in its cooking cage. 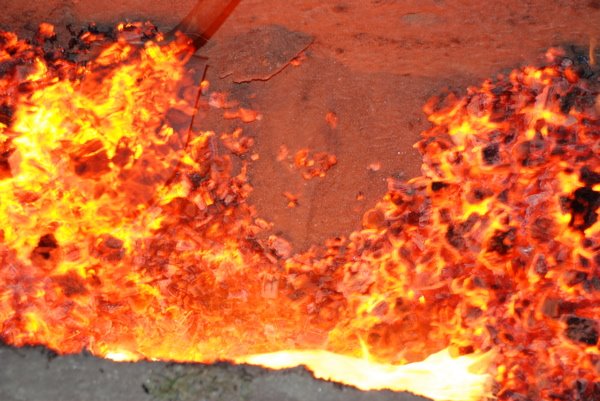 Step 15: Continue with the moving around of coals to make a pocket in which the bird will spend the night. Those bad boys are HOT, so you’ll need to move quickly. Plus, a panic will develop about getting the turkey in the ground tout suite. This is a very active time for you, Mr. or Ms. Hot Coal Mover. 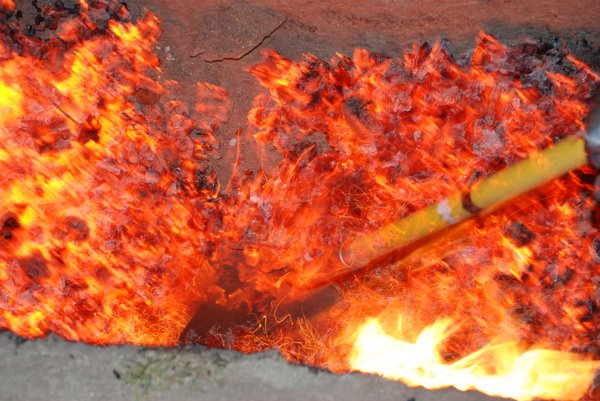 Step 16: Leading with the hand that you whacked with a hatchet earlier in the night while cutting kindling, and which probably needed stitches, but you didn’t have time to deal with that nonsense, and as a result, you are now wearing ten Disney character bandages over to control the bleeding, lower the turkey into the coals. 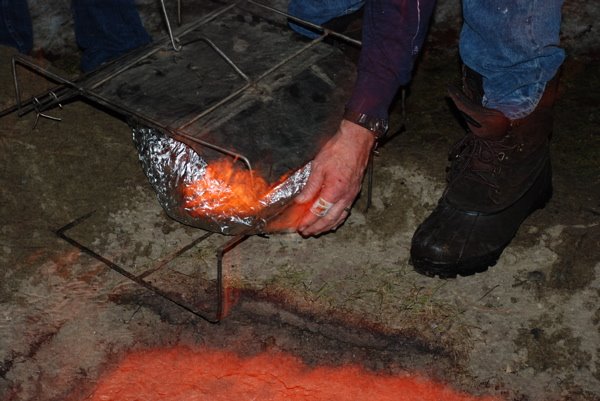 Step 17: Lower the turkey into the hole and now use the handle on the infinitely handy turkey cage that you commissioned my husband or my brother-in-law to make for you for the low, low price of one meeeeelion dollars to position the turkey in the center of the coals and nestle it into them such that the bird itself is surrounded by hot coals. Don’t forget that your non-flammable shovel is quite helpful in accomplishing this task. 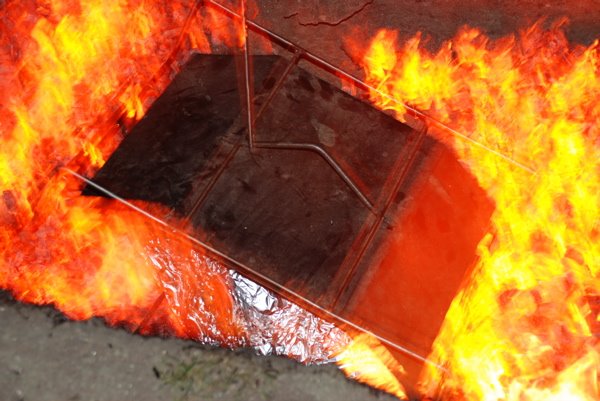 Step 18: Oh, yeah, hey – did I mention about the shovel? Yeah, well you’ll want to use it to cover the turkey with coals as well. After that, you will use the shovel to cover the bird and coals with dirt from the hole you dug. Then you will need a flashlight so you can see what you’re doing while you place a tarp over the hole in the ground and place rocks around the edges to prevent it from blowing up and rain or snow interfering with the cooking process overnight. 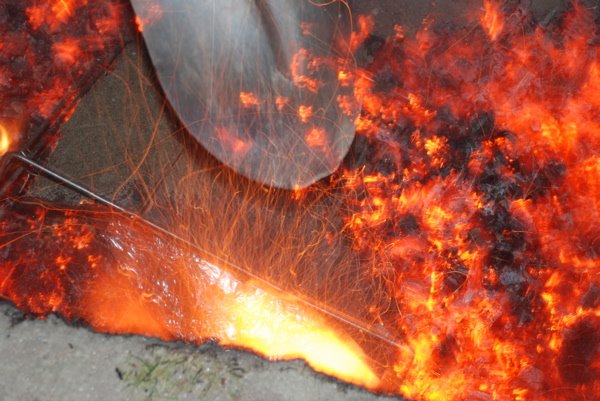 Step 19: I don’t have a picture for this. Well, ok, I do, but my sister-in-law would kick my batooty if I used it, so for step 19, please go to sleep and try to get a decent night’s worth even though you’ve had nine, ten, eleven beers. Oh, but who’s counting?

Step 20: If you happen to be in the shower during this step, you’ll miss it because it happens pretty quickly and then you won’t get any pictures – ones that would cause your sister-in-law to box your ears or otherwise. Twelve hours after burying the bird, dig up the turkey-in-a-the-hole-in-the-ground. Bring it to the garage or some other nearly outdoor location and vacuum the dirt off of the foil to avoid that telltale crunch of dirt in your holiday dinner. Place the still-wrapped bird in a large foil turkey roasting pan in order to carry it into the house.

Step 21: Bring it inside, place it on the counter, and unwrap the turkey. Don’t be freaked out that the skin isn’t brown. It’s still going to be darn good even without crispy skin on which to munch. 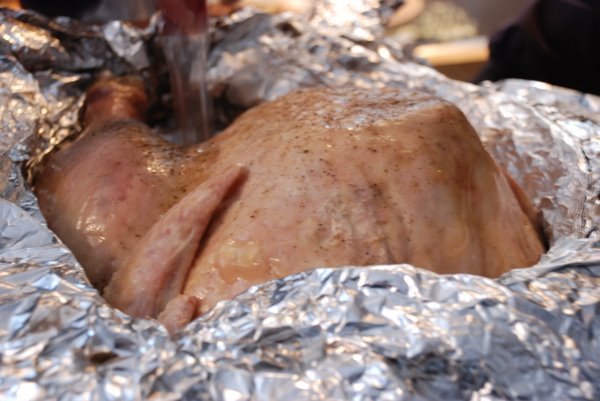 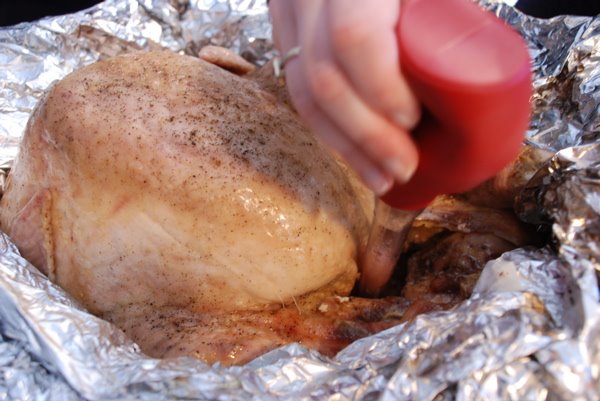 Step 23: Get a little help transferring the bird to a platter. 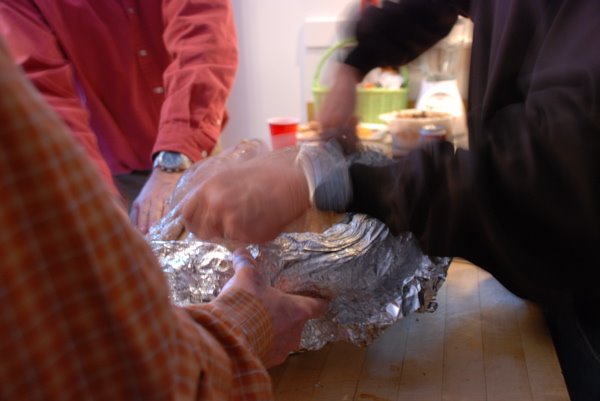 Step 24: Admire the bird and be certain that each of you says to every other one of you, “Well, looks like we did it again. It’s perfect!” Do not skip a single relative. You must say it to everyone, even the small children, so that they, too, will know the inherent risk in cooking the turkey this way. 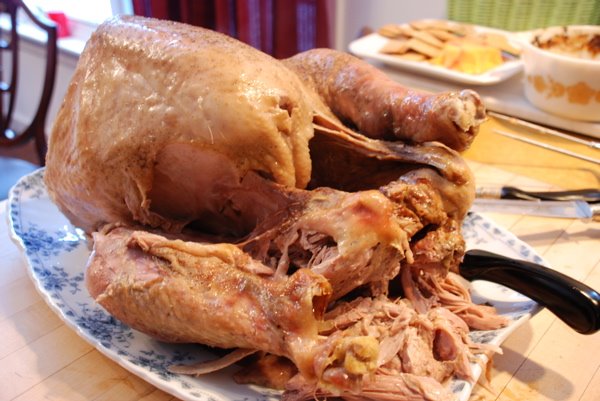 Step 25: Enjoy the meat that falls off the bone and be thankful for yet another Thanksgiving that also happens to make for a good story. In addition to the other things you’re thankful for, of course. 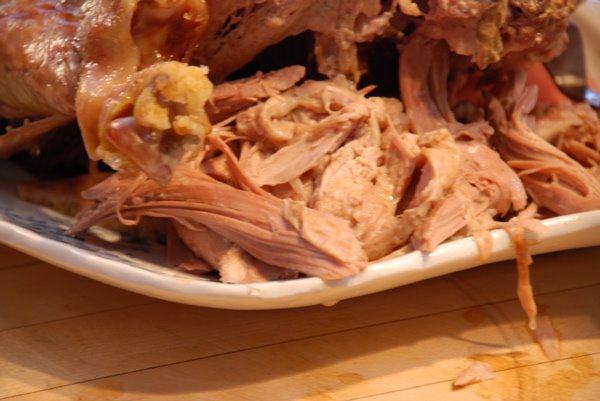 In all seriousness, this is a very labor-intensive holiday tradition. The hole is dug a couple of weeks prior to the holiday – because the ground is in danger of freezing the later in the month it gets – and it and its dirt, which is placed off to the side, are covered with a tarp. We burn cut up skids, rather than good firewood, though that’s up to you if you want to burn a lot of $200-per-cord wood for the holiday. If you are using skids, you need to cut those up in advance into pieces that fit into the hole – I estimate 18 inches long is good. It helps to keep the wood covered as well, and it’s not a bad idea to already have your kindling in ready before the big day. You’ll need to start your fire around 7:30 or 8pm in order to have 18-inches of coals by midnight. Don’t burn a fire near trees or dry leaves, of course, and check with your town regarding fire regulations before jumping into this process. As with any fire, it’s, ah, yeah, a fire, therefore dangerous and can burn you and yours, so maintain a safe distance from the edge of the fire and supervise kids around the fire. Can you see I’m trying to avoid litigation next November 27th? Yeah. I am. Don’t be a dope around the fire, ok?

Dinner tonight: country style spare ribs in a honey mustard-cider marinade, polenta, and caramelized onions (though I should be making apple sauce – I’m feeling a little lazy after the weekend Turkeypalooza and high school reunion.) Estimated cost for two: $9.47. The marinade, for which I will give the recipe later this week, costs $1.33 for 3/4 cup. The pork spare ribs were $4.40 for a pound and a quarter – JR will eat two ribs, I will eat one. The polenta is $1.41 for two servings; 56-cents for the polenta itself at 14-cents per 1/4 cup, the Whole Foods store brand chicken broth is $2.19 for 4 cups, and I’ll add 1 tablespoon of butter at the end, for 8-cents. The sweet onion cost 99-cents per pound, I’ll use one pound, plus butter at 37.5-cents (yes, we’ll call it 38), and sugar, which is negligible (or I am too lazy to figure out the cost of 4 tablespoons out of a bag that was $2.50 and gives 576 teaspoons. It could be laziness. I did mention Turkeypalooza and my high school reunion, right? I’ll do this math some other time, I promise.), and balsamic vinegar for 96-cents.

18 Comments to Do it yourself: Turkey-in-a-hole-in-the-ground pictorial essay