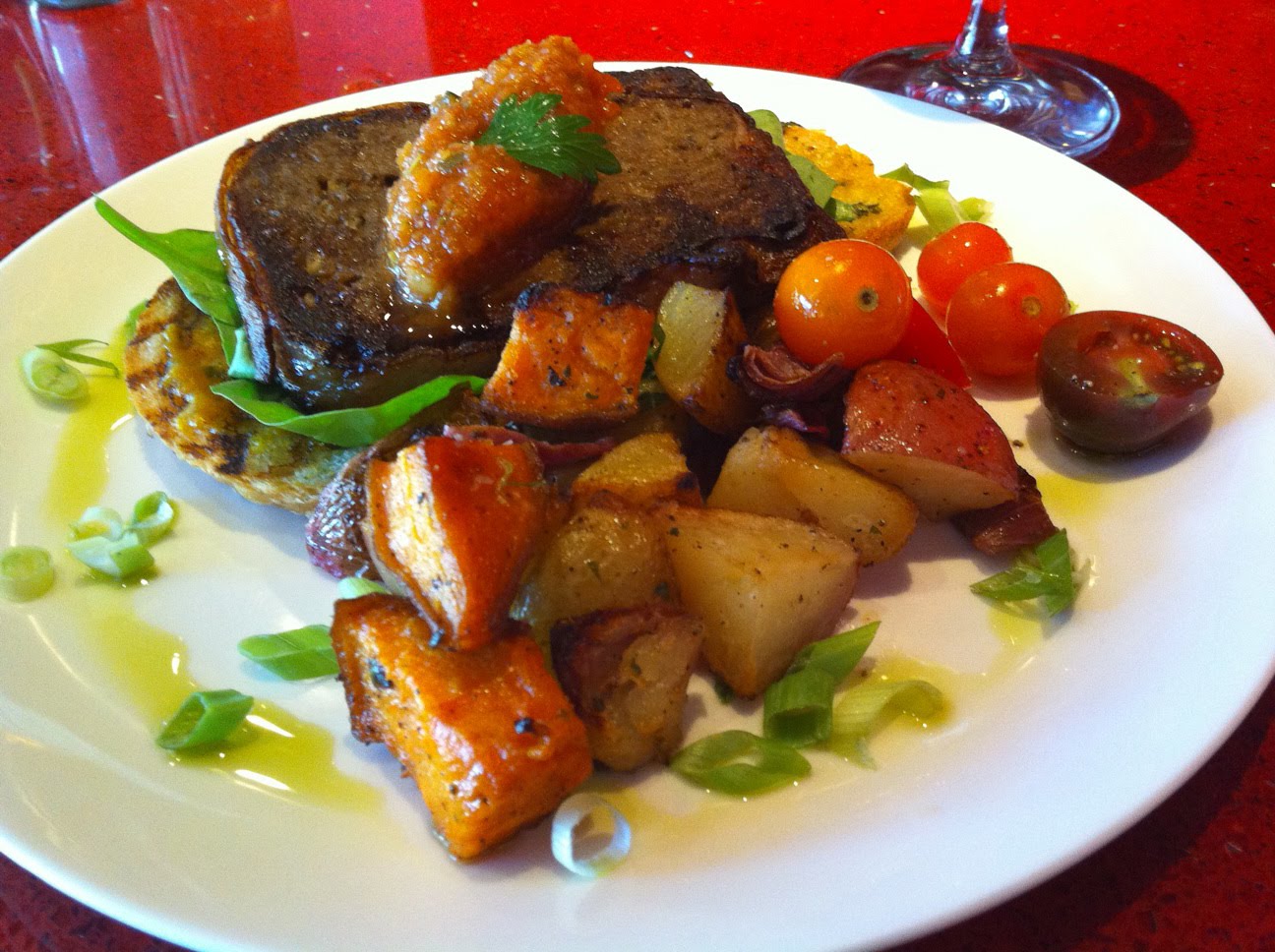 During New Year’s week, while catching up on Twitter post-holiday rush, a tweet from Jackie, aka The Diva that Ate New York, caught my eye:
“Can my New Year resolutions just be list of restaurants I resolve to eat in the next year?”

Man, talk about a way to make New Year’s resolutions fun and not-so-daunting. (I also noticed on Twitter that Jakie is already chipping away at her list, having already had dinner at Fatty ‘Cue.) Not that my other resolutions are drudgery or daunting, but you know what I’m saying. Jackie has tapped into entertainment as resolutions. Genius.

It was difficult to keep my list to 10, so I’ve employed two categories, both of which are in no particular order: Restaurants Worth a Return Visit (posted here), and Restaurants I’d Like to Try (to be continued. This was shaping up to be an enormously long post.).

Restaurants Worth a Return Visit:

Nick’s on Broadway, Providence, Rhode Island: Chef Derek Wagner’s food is pure and simple, and yet mind-blowing. Everything tastes exactly as it is supposed to taste (this sentence really does have meaning: eggs are rich and yolky, beef tastes beefy, tomatoes are perfectly ripe, juicy, and sweet). We wanted to get a jump on our resolutions, so JR and I have already checked this one of the list. It’s going to be a good 2011 at this rate. Mmmmm…white bean cassoulet.

La Laiterie at Farmstead, Providence, Rhode Island: Chef-owners Matt and Kate Jennings transformed their cheese shop into a cheese shop-slash-comfort food haven. From pork belly (Matt is the reigning Prince of Porc), to house-cured meats, to unusual beer and wine offerings, to the cheese selection extraordinaire, I’m looking forward to hunkering down with a winter brew, charcuterie (did someone say “charcuterie“?), and cheese platter one snowy afternoon. Soon.

Persimmon, Bristol, Rhode Island: A few years ago, I was at a trade show at the Javits Center in New York, speaking with a gift shop owner from Bristol, Rhode Island. One particular raved-about Bristol restaurant came up in conversation, and she lowered her voice to share another find, just about cooing, “you have to try Persimmon. It’s incredible.” It is incredible. From service, to food, to ambiance, Persimmon is worth the splurge. JR and I are also looking forward to visiting their newly opened butcher shop, Persimmon Provisions, in Barrington, Rhode Island. Hopefully by the end of this week.

Ten Tables: Jamaica Plain and Cambridge, Massachusetts: When last I visited the tiny JP location (I seem to like a tiny restaurant with outstanding food, like Frankie’s Spuntino), two friends and I partook of the prix fixe menu, which was incredible – a la everything-tasted-as-it-should. JR really needs to check this place out, as he has been deprived, and so on the list it goes.

Trattoria della Nonna: Mansfield, Massachusetts: Once, during a more prosperous time, on a flight home from Italy, I got to chatting with the woman sitting next to me. Invariably, the topic turned to restaurants in the Boston-Providence area, and it was only the shortest of times before Kenny and Yvonne DiFazio’s Trattoria della Nonna came up. “Oh, Kenny,” my airplane row companion said, wistfully, “I love Kenny’s food.”

Now, Mansfield may seem out of the way for Bostonians and Providencians alike, but Kenny is extremely talented, and if you can get there for a wine tasting dinner, his creativity is in full force. Visit their recently added bar and pizza oven in the back, where you can sample small bites (and save a little over the full menu in the dining room). As an added bonus, the wine list describes the individual wines by flavor profile (“earthy, with hints of barnyard and blackberry”), giving the diner/imbiber a better shot at finding a wine he or she will like.

Evangeline, Portland, Maine: This is merely a pipe dream, as Chef Erik Desjarais closed the restaurant in November 2010 to be a stay-at-home dad. I feel fortunate that JR and I were able to eat here with Matt Jennings (of the aforementioned Farmstead/La Laiterie) in October and were treated to a Chef’s tasting menu ranging from escargot, to deep-fried calf’s brain (yep, I go there), to silken lamb chops. It was all so good, I had hoped to go back as soon as the spring thaw is on, but, alas, no. 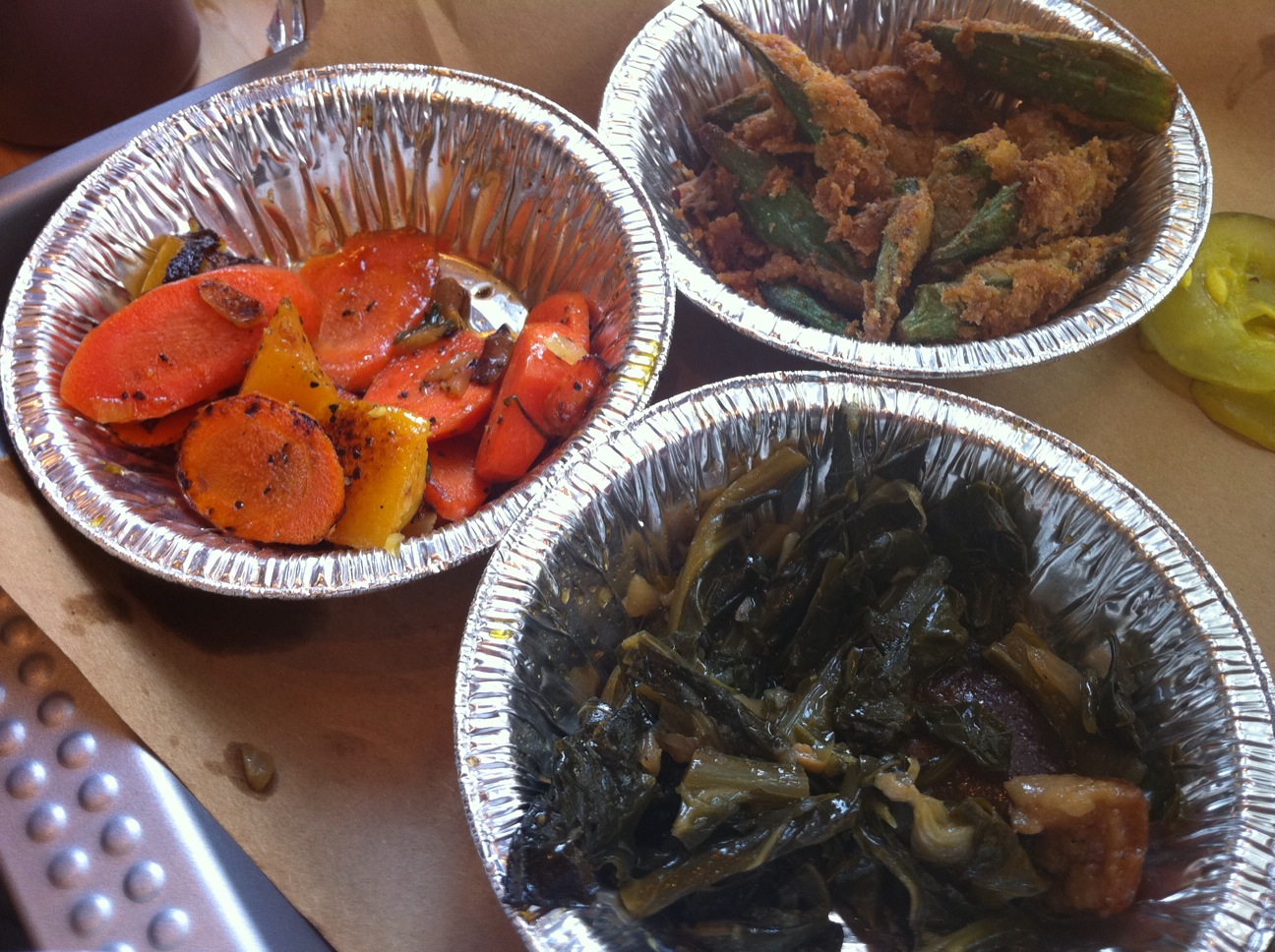 Heirloom Market BBQ, Atlanta, Georgia: In November, I was invited to the Doubletree Marietta Northwest to speak at a client dinner. There’s a lot to write about regarding this trip, including that the chef at the Doubletree, Chris Effa, is incredibly inspiring, and a true student of food. He had just returned from a sourcing trip through the Southeast that led him to Benton’s and Polyface Farm, among other places. All of the food that he sourced on that trip was then featured at the hotel dinner (the one at which I spoke) to promote the hotel’s seasonal, local menu.

Chef Effa was just as at ease discussing French technique as he was barbecue (though he confided that he’s not qualified to judge bbq, however, I imagine that this is probably next on his extensive list of food-student things to do), and Heirloom Market BBQ was a newly-opened joint (really, a joint – there’s a booze store next door to this one-level, small – almost tiny – barbecue resto, which, being a Northerner, perhaps I have no right to make the call, but I think it qualifies as a barbecue joint.).

Only one-week old at the time I was there, the line snaked out the door, and Chef Effa and I managed to be the last ones to leave lunch service. Chef-owners Cody Taylor and Jiyeon Lee serve up barbecue that keeps flavors clean and pure; the smoked meats are just smoky enough (and they have very fancy smokers to do the work, though smoking requires them to be there at 5am each morning to get the fires started), and the sides – well, I’m waiting for peach season here in Massachusetts so I can make a version of their Carrots n’ Peaches, and the okra and collards were also imitation-worthy.

Tipsy Parson, New York City: JR and I ate here last January during a quick NYC getaway. I could have eaten at Tipsy Parson for all 3 daily meals, though we were only able to get one dinner in on that trip. If you go, please do order the chicken-fried chicken livers with green tomato chutney and be sure that your dining companion gets the beef short ribs. You’ll both be eating short ribs for lunch the next day, as the serving is huge (this is not normally a plus in my mind), and, more importantly, tender and tasty. 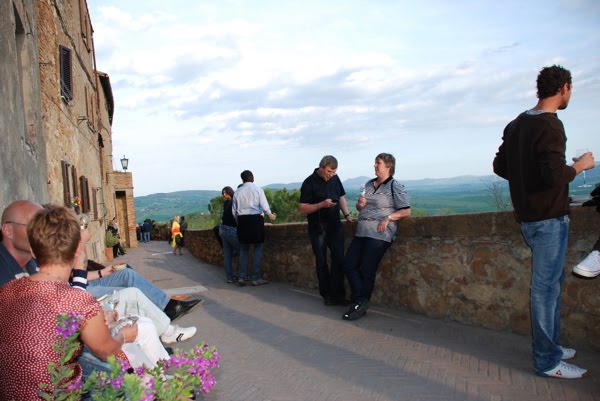 The view at the bar where you wait for your table at Latte di Luna to be ready. Tough place to wait, right?

Latte di Luna, Pienza, Italy: More on the pipe-dream front, as there is no trip to Italy planned for 2011, however, despite Pienza’s touristy status (I’ve heard the town referred to, in a most contemptuous fashion, as The Disney World of Tuscany – I believe there was a phooey at the end of the statement, as though our fellow American tourist had to spit out the nasty bits of Renaissance Disney World gristle to purge himself of it), it is one of my favorite spots in the world. There’s a fabulous bar – well, it serves drinks, but wouldn’t be recognizable as a bar to the vast majority of Disney World-attendees – on the fortified wall on the edge of the town, providing hours of fun gazing at the Tuscan hillside, but when you need to eat country food after an aperitivo or due, head over to Latte di Luna for roast suckling pig worth boarding a flight you can ill afford, or roasted duck with olives, or cannellini beans firm yet chewy – and the hospitality of Roberto and Antonella, both of whom have been working the front of the house for many a year, serving up those spit-roasted pigs to happy, Disney World of Tuscany-embracing tourists.

Mondo X, Cetona, Italy: This is a totally mind-blowing restaurant. Particularly if the highest end of restaurant dining is not within your typical purview (and it certainly is not within ours).

Housed in a convent founded by Saint Francis in 1212, it is now home to young men from all over Italy who are recovering from drug and alcohol addiction. At the convent, they tend to the fields, growing the fruits and vegetables and raising the livestock that ultimately are prepared and served – by these same young men – to a small group of diners at lunch and dinner. The purpose of their time at the convent: to provide them practical skills that they can use in the outside world to stay sober and be productive.

Upon arrival, JR and I were greeted at the front gate of the convent, handed a sparkling wine, also produced at the convent, then guided through candle – and torch-lit (very 1212 of them, don’t you think?) – corridors to the dining room. The menu presented to us was hand-written, featuring courses of vegetables, smoked river fish, delicate pasta, and game. JR and I got to chatting with a Neopolitan couple seated nearby and as a result were, as tends to be our way, the last to leave the restaurant – a 4-hour gastronomic extravaganza. And a very pricey one, at that. But so worth it (start saving now if you’re going to southeastern Tuscany this summer. You won’t regret it.).

JR and I also have some serious resolutions for this year, which require their very own post, and center around self-sufficiency. It’s about to get very farmy around here. Very, very farmy.

5 Comments to 2011 Restaurant Resolutions: Part I