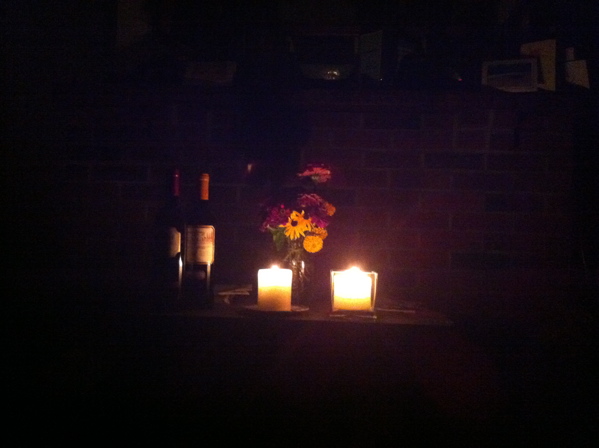 the view from our couch two days after Irene

That’s a somewhat misleading title. Perhaps I should have called this “Storm Stories: Moderately Disgruntled Campers Eat in the Dark for Five Nights”, but I’ll bet that The Weather Channel wouldn’t find that amusing or worthy of a half-hour long show.

Camping really has never been my thing. Happy camping even less so. I was a moderately decent Girl Scout – I have always embraced the idea of a reward for a task accomplished, so badge-earning suited my early do-gooder self quite well (in case you are wondering, yes, I’d still like a badge, or a gold star, or some acknowledgment of a job well done – are you with me on this?), yet I was a terrible, horrible, atrocious, horrific – okay, you get the gist – camper from a young age.

If you happen to be wondering which scout in my troop left her minty green Carters underwear with the allover print of smiling turtles and daisies in the bathroom at changing time, yes, that would be me. Of course, the requisite troop leader reaction to a scout leaving her undies behind is to hold said knickers over her head, wave them around, and belt out to the chirping crowd, “Whose underwear are theeeeese? Whose underwear are theeeese?”

It’s particularly nice if the crowd consists of 100 or so fellow campers, who then – as can only be expected – slowly turn their heads in unison until their eyes lock on you. And you, you are tentatively raising your hand, your face flushed purple in horror, when the realization that yes, that underwear that is being waved around in front of every girl you will ever attend school with for the next 10 years is your underwear.

At 8 years old, the emotional distress of being the forgetful-slash-slobby underwear leaving camper was only slightly worse than the physical discomfort of sleeping on the ground. Even then, I could swear that my back was sore after just one night in a tent. Bug bites were frequent and unavoidable, looking like red, rupturing skin volcanoes by the time you returned to the comfort of your own home.

Yes. I did just bring up farting on a food blog. And with good reason. As it relates to camping, and the despising thereof.

One of my grade school friends had such an overwhelmingly gassy night on one trip that the other 5 of us in the tent spent the entire overnight groaning at each telltale noise, Wonder Woman and Scooby Doo sleeping bags pulled up over our noses to fend off the assault. And those sleeping bags were not padded well enough for staving off stench nor to provide a comfortable sleep surface either, btw.

In the morning, our friend hung her head in shame, while we chided her, pointing at a dead fly we found on the ground of our tent, insisting that she had killed it. “You could’ve killed us with that gas,” I believe was one of the reprimands.

And I think I was scarred. I’ll bet the fly-killer doesn’t think too highly of camping either.

Which brings us to the food. Beans were to blame for the fly-killer’s gas. Camping food was limited in my Girl Scout days, I’m sure in large part by the troop leaders’ desire to keep meal times simple and easily cleaned up after. Yet, for those meals, we shall use mess kits to make easily cleaned up after dishes.

Really, the mess kit itself was the best thing about meal time. It was fascinating, in a “wow-check-out-how-all-this-shit-locks-together” kind of way. But the food? Well, any time an 8-year old girl is accused of killing bugs with her stink, it just can’t be that good. Remember, little girls generally smell of jasmine and roses. Just naturally.

The appealing parts of camping – the storytelling, the campfire, the singing (which I am wont to do, and loudly, though I am woefully tone deaf) – well, those things, I figured out early on -  like, by the time I had walked to the front of the crowd of giggling, whispering girls and had ripped my minty green undies out of the troop leader’s clutches, those things could be had without any of the discomfort of camping. Without the lack of electricity, without the unforgiving hardpan ground-slash-bed, without the mushy, crappy food. Without the farting, even.

Now, especially during the summer, we frequently spend nights around the fire pit in our backyard, with good food, good music, storytelling, and friends. That’s the good stuff of camping culled from the stuff that gets a thumbs down (from me, anyway), and all with the added benefit of electricity, running water (a proper toilet!), and our comfortable bed.

I have not camped since the early 1980s. And I am ever thankful for that. However, when Irene rolled into town, felling trees, and ripping down power lines along the east coast, we began a little game of Frontier People here in our neighborhood, as did so many others from North Carolina on up to Maine.

This Frontier People game isn’t a terrible game, as you know, for it has just been mentioned, we do have a comfortable bed, but the lack of running water (no proper toilet! We have well water here at our house, as does everyone in our town), and the fact of it being dark inside before it became dark outside made for a tedious time after about Day Three without electricity.

However, in the early, isn’t-this-a-fun-adventure stage of the storm, when power had only been out for a few hours, we were thrilled at this stove-top meal option. Giddy, in fact. Heck. I’ll even go so far as to say that we were indeed happy campers.

These savory pancakes helped us use up the fresh ricotta before it expired in the warming fridge, as well as a batch of slow-roasted lemon drop tomatoes that would surely have gone south before the power came back on. One hundred and seven hours and 12 minutes later. Not that I was counting or anything.

And, added bonus – though I might have liked to have busted out with my old mess kit – these were easily cooked on our gas-fueled cooktop. Camping meal success!

To slow roast cherry tomatoes, preheat the oven to 250 degrees Fahrenheit. Slice the tomatoes in half, place them in a single layer on a baking sheet, sprinkle with kosher salt, freshly ground black pepper, and an herb of your choosing (we have an abundance of oregano, so that’s usually the herb of choice here), then drizzle with olive oil, and bake for 2 hours, until the tomatoes are starting to brown. Be sure to check on the tomatoes occasionally to be sure they aren’t roasting too quickly, resulting in burnt edges. 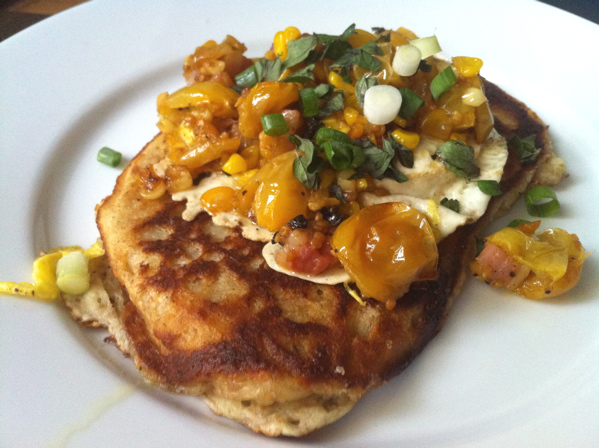 Estimated cost for pancakes, eggs, and sauce: $12.63 for four servings, or just under $3.16 per person – so we’ll round up to make it easier on our math brains. The flour for the pancakes costs 26-cents per cup, therefore 35-cents for 1 1/3 cups. The baking powder and baking soda are in the range of a penny or less, so we’ll add 2 cents. The Pecorino Romano costs around 30-cents for 2 tablespoons. The oregano should cost no more than $1.50 per bunch during the summer, and we’ll estimate that you’re using half of a bunch for this dish, to be on the safe, rounding up side, so that’s 75-cents. The milk costs 32-cents per cup, the ricotta costs $5.99 for a 2-cup container, so that’s $3.00. The egg is one of 12 that costs $3.00 a dozen, so that’s 25-cents. If you’re adding eggs to the dish, that will bring the tally up another $1.00 for 4 people. The butter for the dish should cost around 33-cents (figuring $3.49 for 32 tablespoons of Whole Foods 365 Everyday Value store brand butter). Likewise, the oil we’re using is Whole Foods 365 and costs $5.99 for 33 ounces, so 2 tablespoons for the sauce is around 18-cents. The pancetta we used cost $2.00 for a homestyle round made in Brooklyn (and sold at my favorite Italian market). The shallot costs around 30-cents, and the crushed red pepper flakes around 6-cents. The tomatoes were from the garden, so nearly free, but to purchase tomatoes at the farm stand, we’re looking at anywhere from $2.50 to $3.00 per pound. Let’s go with $3.00 per pound, and figure that between oil, oregano, and tomatoes, it cost us $4.00. Add a green onion for garnish – 1 of about 15 in a bunch costing $1.50, and that’s an additional 10-cents.

Despite all this moaning and groaning I’ve done, the lack of power here paled in comparison to what residents of the Catskills and Vermont are dealing with post-flooding – loss of electricity like what we had is a mere inconvenience, and one that can be worked around when necessary, but those folks, they have a serious disaster on their hands.

If you’re interested in helping people in New York State and Vermont recover from Irene, please consider donating to the Red Cross or Vermont Food Bank. Thank you!