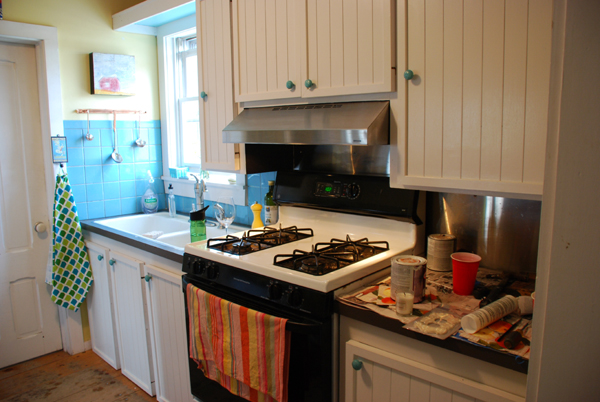 construction is still in progress. Note the paint cans to the right.

JR has lived in our house for 25 years, and I glommed on around 15 years ago. Once, about 12 years ago, a former owner of this house stopped by with her daughter (who had been born in the house), and remarked, “Oh,” silence, silence, silence, “You haven’t done anything to the house.”

So, in 2012, this puts us in the at-least-33-years-without-an-update category for the kitchen, which was sporting flat knotty pine cabinets in a warm honey-ish stain. I’m going to guess that they were nearly as old as I, probably seeing their first light of day in the very early 1970′s.

It’s not that we didn’t want to revamp the kitchen. Oh no. In fact, we had (shortly after said woman’s visit) repainted every room in the house, including applying a coat or two of cheery yellow paint in the kitchen. Still, there was no escaping the knotty pine.

Recently, I was on a video shoot (just work – nothing too exciting) at The Buttery in Boston’s South End. Between flurries of email, I kept staring at the wainscoting in their back dining room. At the conclusion of the shoot, I showed JR a dimly lit iPhone photo, and said, “There. That is what we’re going to do to the cabinets.”

Lucky for us, JR is uber-talented and handy with woodworking tools. This, I know, is not common, so when we get to the part where we’ve spent less than $500 so far on our kitchen renovation, please remember that if you (or your partner, or your kitchen renovation volunteer – wow, that’s a good friend!) are not a contractor and you don’t have any woodworking tools, this is not going to be an attainable price.

We decided to do a test. We’d see if we could repurpose the existing knotty pine cabinets, rather than have JR build new tongue-in-groove cabinet doors. To a man (okay, there were only 2 men, but both of them fell for it), those who saw the doors in progress said, “Wow. So you tongue-and-grooved these?” No. No, JR did not. He simply used his table saw to create grooves spaced 3-inches apart. He then added trim board around the edges, and I primed and painted them (you have to know where your talents lie. Painting is it for me, as far as building trade-skills go). The test was a smashing success. No need to buy materials for new cabinet construction. Whew.

While we were at it, we replaced the Westinghouse range hood. Westinghouse bought CBS in 1995 (if the name sounds familiar to you in any way), however, they sold their appliance business in the 1970′s. We’re talking a 40-plus year old range hood, people. Let’s give that a collective, “eeeeewwwwww.”

Thank you. That was cathartic.

Likewise, our faucet was also from the 1970′s. Really, sink faucet industrial design has come a long, long way since then. With the new tall faucet, it’s like the sink has had an addition put on. A second floor, if you will.

We’re about two-thirds of the way through our renovation. The kitchen island cabinets and drawers all need to be given JR’s magic woodworking touch, then painted, and we’ve yet to deal with the small countertops at the sink and next to the stove which need replacing, plus there’s a litte re-grouting and a trompe l’oeil backsplash trick I’m hoping to pull off. Even with these remaining items, I estimate we’ll be in the $650-700 range for the whole schlebang.

Without further ado, here is the whole schlebang, before and after: 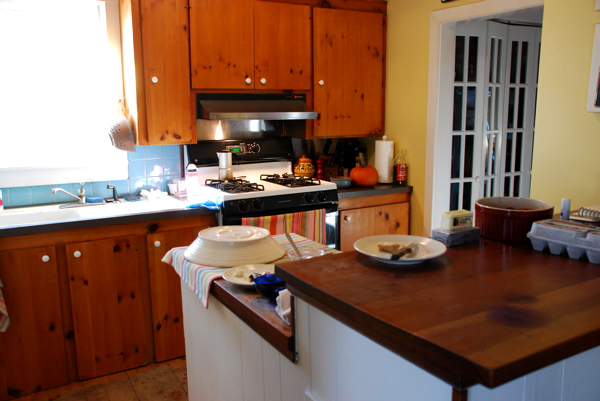 Knotty pine! Westinghouse range hood! Half-a-story faucet! Oh, p.s., the spray nozzle has been broken for about 13 years, too! 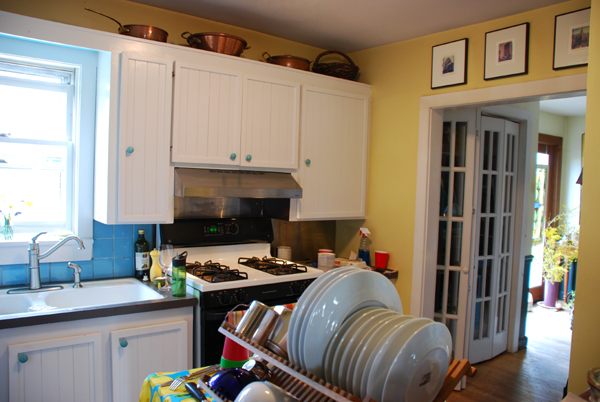 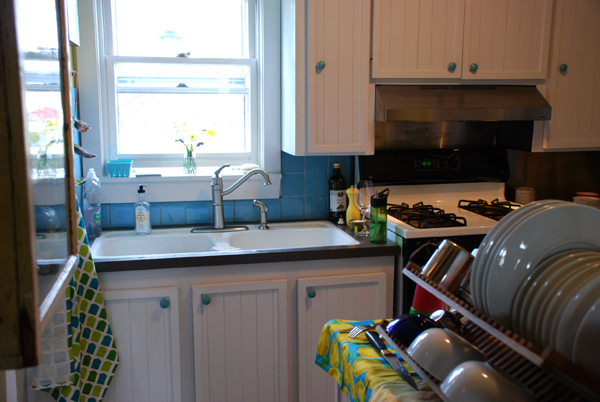