This Week in the Garden – Early-August and so much mess 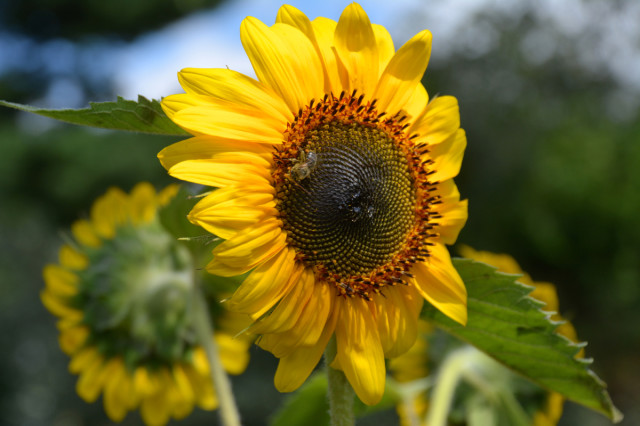 To avoid the mess that is our early-August garden, let’s start with one of the better looking spots in the garden, like, say this volunteer sunflower in the herb bed that has 11 flower heads coming off of one robust stalk. We’ll just ogle this one flower and its honeybee friend for a moment before moving on to less lovely sights. 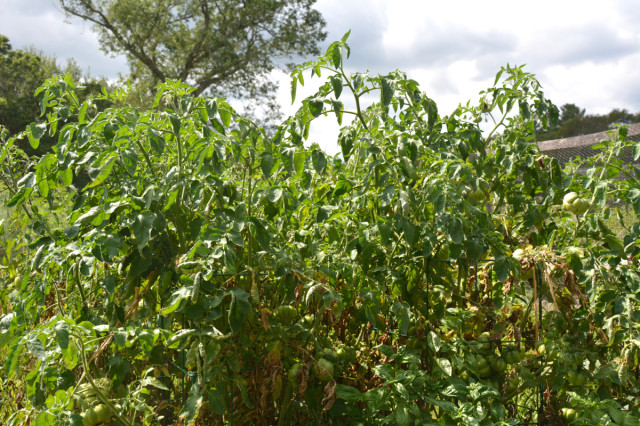 Not that a tomato bed that looks like it could eat you isn’t a lovely sight – mainly because that’s hyperbole and obviously isn’t going to happen – but also, and primarily - because there are just so many tomatoes. So many.

This year, we planted more tomato plants than usual – our usual being 12. We jammed them in wherever space would allow, in the zinnia border, in a neglected, weedy bed, and, of course, in the two beds that are normally designated for tomatoes. I think we have 20 tomatoes planted. Twenty. There are just two humans who live here, so let’s do the math on our Insalata Caprese intake for the rest of the season, shall we? It’s something like 3 meals per day multiplied by all of the days between now and first frost, say sometime in late October.

After we were all done – all done! - planting tomatoes, our neighbor graciously gifted us two sungold plants, the seed for which had been saved by our other neighbor. Despite having completed all tomato planting (“holy cow, do you think we have enough tomatoes? Who’s going to eat all of these?!” JR obviously hadn’t yet been given the Insalata Caprese word problem above when he asked this question.), these two cherry tomatoes couldn’t be left to the resident woodchuck (who turns out to be the lettuce-decimating culprit, and also a dead ringer for the Caddyshack woodchuck/gopher, right down to the standing on his hind legs and staring mockingly at us, sometimes even through the windows of my studio, all while waggling his arse. I’m allllriiiiight…don’t nobody worry ’bout me.).

That’s one of the plants spread out on top of volunteer oregano, St. John’s wort that I thought I had long ago eradicated from the garden (invasive!), and unwanted berry canes. As I snapped this photo, a dead daylily stalk poked me in the cheek. Things are a mess out here. 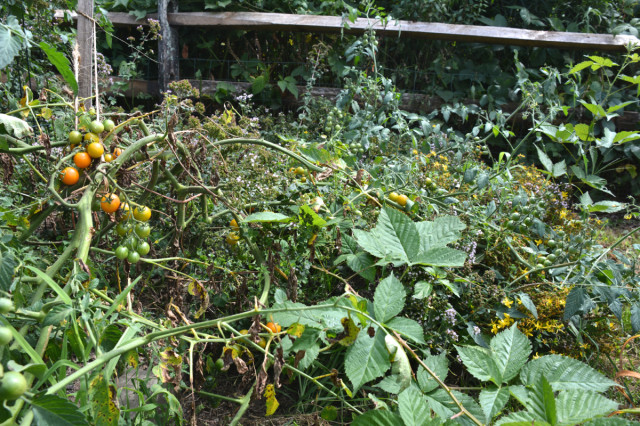 Please note the zinnia taking a nap on the ground while guarded by weeds going to seed. A mess. 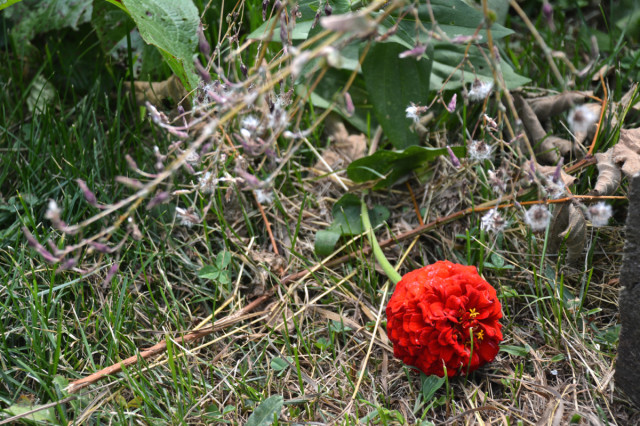 And these cleome seedlings – that are still in the seed starting tray, but that had made it into to the garden, only to be abandoned. 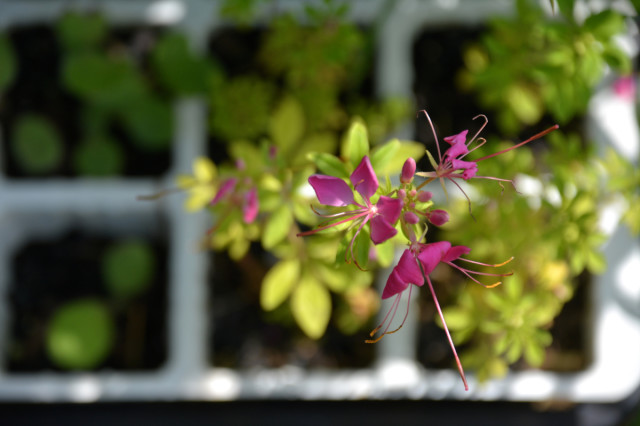 Even if we aren’t getting around to weeding, or even finishing planting, for that matter, we do need to get around to harvesting winter squash. We’ll start with those two buried in amongst the weeds along the garden fence there. 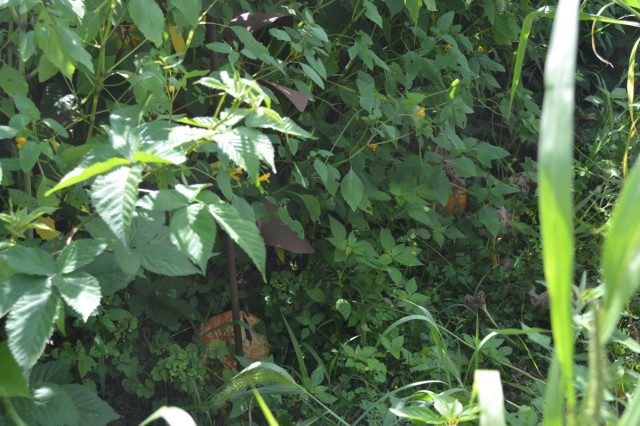 And there are another two in here. Pretty easy to spot, right? 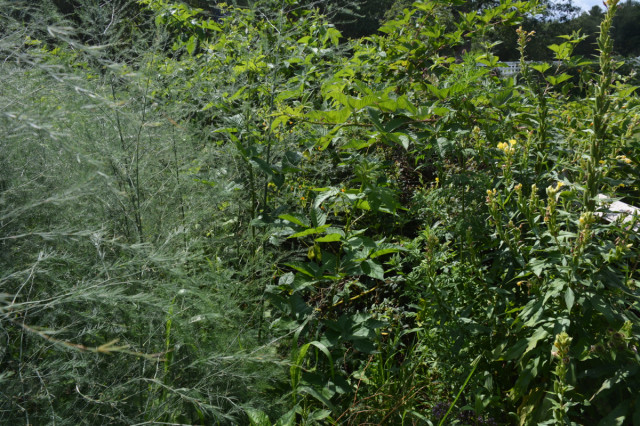 By this time last year, we had already been eating blackberries for weeks. Pints, and pints, and pints of them. This year, the fruit is scarce, and only just beginning to ripen. But there is fruit, and that’s a good thing. 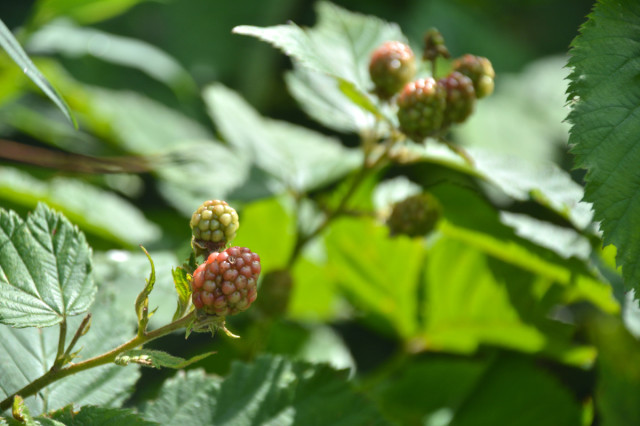 Even with all of this mess, and possibly even because of it, the garden is still pretty lovely, if decrepit. Quite similar, in fact, to this zinnia here. 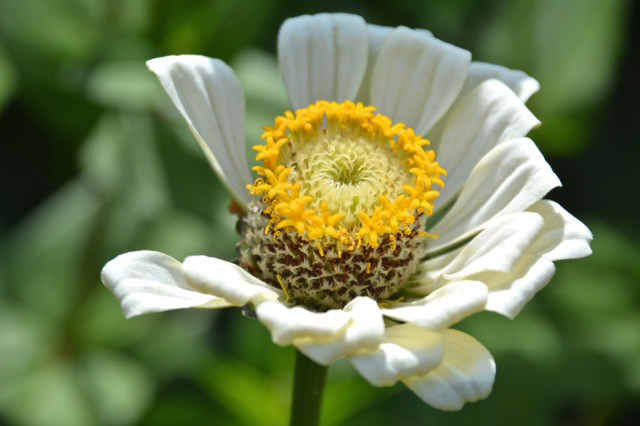