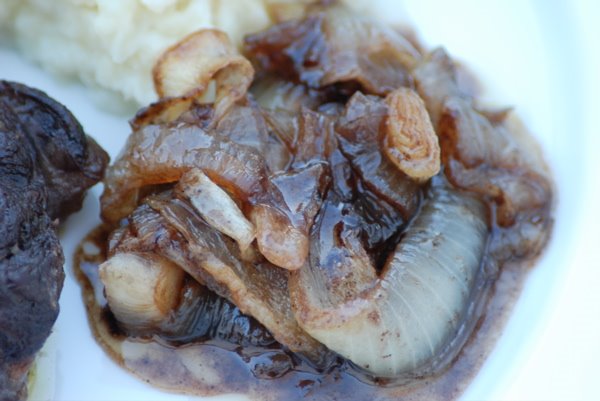 Caramelized onions also happen to be quite versatile – think toppings for pizza, salad, focaccia bread, an addition to a frittata – and, as mentioned once or twice above, as a side dish for meats – and have I mentioned their affinity for mashed potatoes?

As described here, this side dish costs $3.10 for four servings. The onions should be the least expensive you can find – there’s no need to spend your money on sweet onions for this as the onions will be made sweet by caramelizing. I bought a two-pound bag of yellow onions at Whole Foods for $1.65. The butter is 1/4 of a package that costs $2.79, so that’s 70-cents. The balsamic is not the fancy-schmancy aged balsamic, it is the more common type found in every grocery store and was $7.99 for a bottle containing 33 tablespoons. Break that down, and for three tablespoons, it costs 72-cents. And the magical sugar that creates the caramel was 3-cents.

Dinner tonight: People, check your sales fliers. This week, Maine shrimp is on sale at my local Whole Foods. Thus, we are having Shrimp with Broccoli and Linguine in a Garlicy-Lemon Sauce. Estimated cost for two: $6.89. The shrimp were $3.99 per pound. These are not jumbo shrimp and they are going to require me to peel and de-vein them myself, but we haven’t had shrimp in a very long time, and so I am quite happy to clean them up. We only need a half-pound for this dish, so that’s $2.00. The garlic will be around 15-cents, the shallot will cost 25-cents. The lemon is $1.20 at 60-cents each. The butter for the dish is 35-cents, the olive oil is 33-cents. I’m using both oil and butter so that the butter keeps from burning as it cooks. It’s a trick you can use yourself. That’s why I share. The linguine is half of a one-pound box that cost $1.99, so that’s $1.00. The broccoli cost $1.61 for just over 3/4-pound. I suppose we could use less than the entire head of broccoli, but for the sake of rounding up, we’ll just leave it at that. So we get to have a seafood meal for less than $7.00. Not too shabby. Beef and shrimp all in the same week? Sweet.