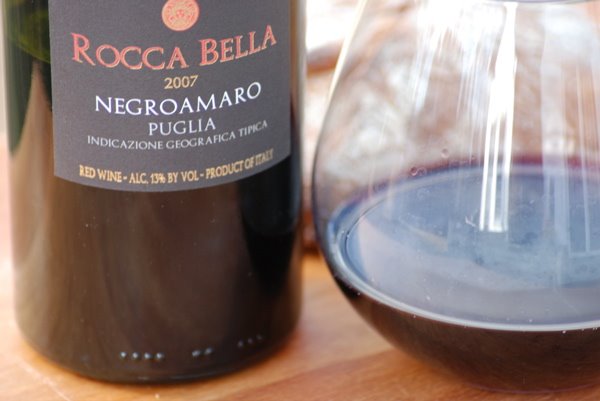 The corner store in my neighborhood – and I use neighborhood loosely, as the “corner store” is actually nearly two miles away from my house – has a selection of wines that are priced at $9.99 each, or 3 for $25. Typically, this sort of pricing scheme for wine makes me nervous because it normally seems to involve wines that you might not truly enjoy drinking. Of course, it also tends to involve wines that are 3 for $10, which is a boon for stocking up on wine with which to cook, but not so much for quaffing. However, this is not the case with this wine – Rocca Bella Negroamaro 2007 – a fruity, eminently drinkable red from Puglia.

I have an admission. My friend Ian, whose lobster ravioli I assisted in making the night before Valentine’s Day, is married to JR’s niece. Technically, this makes me his aunt. When he went to the aforementioned corner store to ask for this Negroamaro, he said, “My aunt really loves this wine. Argh. I can’t remember the name of it.” More argh. And argh for me because he is two years older than I am, and there’s really nothing more sad for a woman in her late 30s (38 is the new 18!) than being called Auntie by someone older than you. But, it’s true. I am his Auntie.

Lucky for Ian, I am also a wine-loving Auntie who is always on the lookout for a bargain. So I had brought a bottle of this Negroamaro over to his house on one of our regular family visits, and he loved it. Here’s the deal: it’s a deep ruby red in the glass, not terribly complex on the nose, is slightly sweet, tastes of black cherry, and has a smooth finish. And it costs $8.33 per bottle. Under the 3 for $25 scheme, that is. Even at $9.99/bottle, it’s a great deal. It is imported by Monsieur Touton Selections, a company known not for high marks on the 100-point scale from the wine press, but for its solid, value wines. This one certainly fits that billing. And my glass. And my budget.

Negroamaro is grown in Puglia, which is the heel of the Italian boot. It has been a site for viticulture as early as 2000 B.C. (I’ll let you do the math on that, ok?). Negroamaro is grown predominantly in the southern portion of Puglia, along with Primitivo and Malvasia Nera. Negroamaro is the base of nearly all of the red wines of southern Puglia, and you may have already enjoyed it as part of the blend in another value wine, Salice Salentino Rosso. It tends to be a bit robust, but this bottling is smooth and accessible – perfect for an everyday slosher, as I like to say. Slosher seems like a good word, wouldn’t you agree?

Neither Mssr. Touton nor the vintner have a website to which I can direct you, but I do recommend that you seek this bottling out if you’re looking for a fruity, easy-drinking red for weeknight imbibing, an inexpensive crowd-pleaser, or a gift for Auntie. Especially a gift for Auntie.

Dinner tonight: Untraditional Bolognese Sauce with Rigatoni. Estimated cost for two: $3.58. The ground meat was $3.79 per pound at Venda Ravioli, the carrot, celery, and onion for the soffrito (which is the slowly simmered base of the sauce) were about $1.00, the tomatoes were $2.00, and the amount of milk I’ll use in the sauce will be about 50-cents. I’m also using anchovy paste and a bit of tomato paste, so let’s call those $1.00, to be generous about it. The total cost of the sauce is $8.29 for approximately 8 servings, so $1.04 per person for that. The pasta was $1.99 for the box (Whole Foods store brand), and we’ll use half of the box, which we will round up and call $1.00. I don’t have any Parmigiano-Reggiano in the house (for shame!), so we will sprinkle some pre-grated Pecorino-Romano over our pasta for an additional cost of about 50-cents.